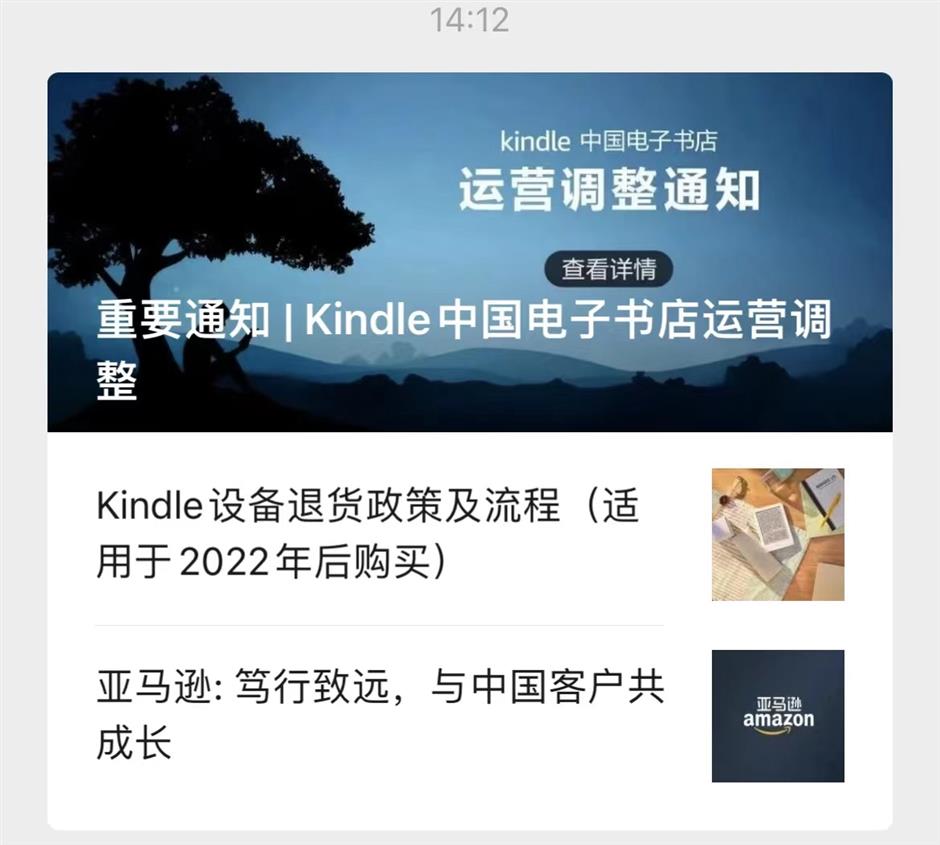 Amazon has announced that it is shutting down its digital Kindle bookstores on China's mainland.

Chinese readers do not have to worry about Kindle's exit and e-bookstore services from Chinese mainland.

Domestic tech firms have moved in quickly to fill the gap with their own versions of "beyond e-book exclusively" solutions.

Compared to the Kindle, the Chinese products have advantages in terms of design, screen, stylus, software, and online content, making them better, or at least more suited, for local users.

"The formal withdrawal of Kindle from the Chinese market marks the end of an era, but it also marks the beginning of a new pattern for domestic peer enterprises," said Wang Jie, vice president of Hanvon, which introduced its first-generation e-book reader in 2009.

In May, the Shenzhen-listed company released the N10, which is an electronic paper book with a 10.3-inch screen, a pen, and smart features. 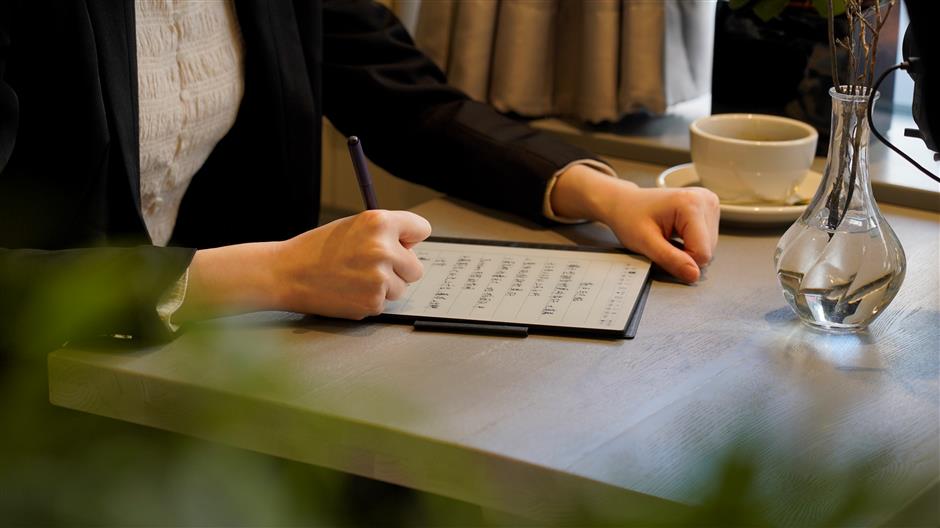 Hanvon N10 features handwriting optimized for Chinese characters and is an intelligent tool for business people in the workplace and researchers for academic work.

Apart from reading, Hanvon also has Chinese-character-optimized handwriting, handwritten notes, meeting reminders, and note gathering and search tools. It's an ingenious tool for business people in the workplace and academic scholars.

Along with Amazon, Huawei, iReader, and Boox, Hanvon is one of the tech companies attempting to tap into the burgeoning Chinese e-book market. Readers, particularly those of the younger generation, are spending more time reading digitally.

In 2021, China had 506 million digital book readers, up 2.43 percent from the previous year. The overall scale of China's digital reading market reached 41.57 billion yuan (US$6.3 billion) last year, representing an increase of 18.23 percent year on year, according to a report released by the China Audio-Video and Digital Publishing Association in April.

The average Chinese person reads 4.76 paper books annually and 3.3 e-books per year, a substantial rise. According to industry sources, China is now the world's No. 3 e-book reading device market.

Chinese Kindle users won't be able to purchase or download new e-books from June next year after Amazon announced the closure of its e-bookstore services on the Chinese mainland.

No one doubts Kindle's influence and contribution to e-books. But, to some extent, Amazon is out of date, and people have even joked about its purpose: "Is your Kindle used for reading books or instant noodles?" netizens commented.

Korie Jiang, a Shanghai-based marketing officer, is the latest to switch from Kindle to another e-book platform. In August last year, she bought a Boox Nova 3 for 2,180 yuan and took it everywhere with her. She sold her old favorite, a Kindle Paperwhite.

"Boox provides a better reading experience," Jiang said. "The built-in Neo app is excellent, particularly with PDF files. Adjusting the font in Word, for example, is one of the most effective methods, as are features like justification, straightening, columns, and text direction in PDFs."

Boox, an Android-based gadget, enables her to run and optimize third-party apps while also allowing her to doodle, divide the screen into two panes, and connect to her iPhone to retrieve files, according to Jiang.

Besides Hanvon and Boox, iReader is another professional e-book reader provider in China.

According to the firm, iReader may take over the "torch" of Kindle because it is now a company with copyrighted content, software, and hardware. It boasts a robust pricing system and business plan, as well as an online store with over 300,000 books.

"The market is always looking for brands that can speak to the needs of local users," said Cheng Chao, CEO of the Shanghai-listed iReader. 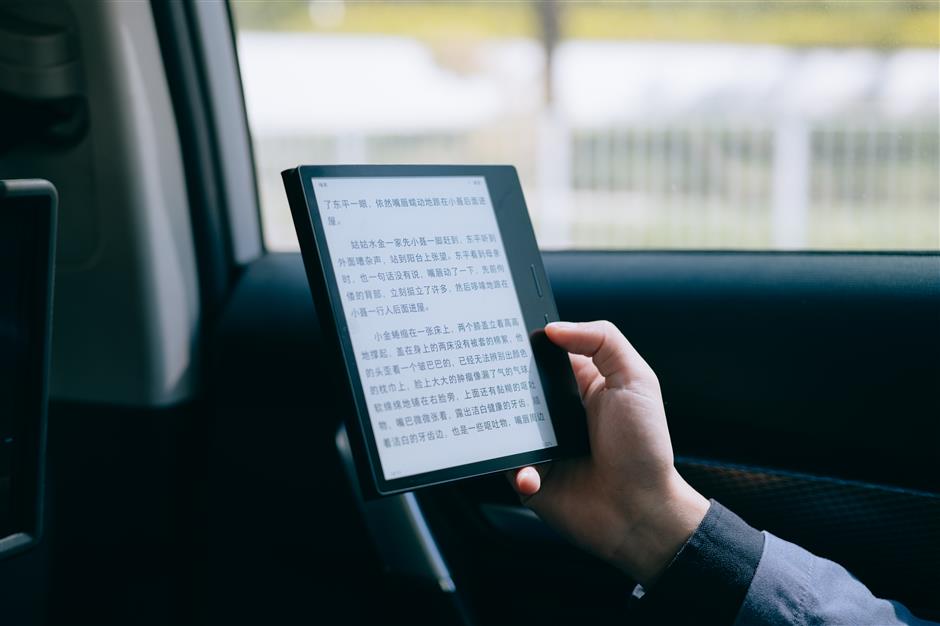 The company introduced new products such as the 10-inch Smart 3 and 7-inch Ocean 2 e-book readers in April. The new gadgets can meet the demands of reading, business, the workplace, and learning with features such as tactile buttons and one-hand handling.

Huawei is a newcomer to the e-book business, but its research capabilities and large user base make it a potentially formidable participant.

In February, Huawei released the MatePad Paper, a 2-in-1 device with a 10.3-inch e-ink display that provides a "paper-like reading and writing" experience. It also comes with a stylus pencil for taking notes, multitasking, and collaborating with other Huawei HarmonyOS devices.

Huawei's products, which include smartphones, e-readers, and other smart gadgets, will be used in smart homes, healthcare, transportation, offices, and digital entertainment. According to Richard Yu, CEO of Huawei's Terminal Business Unit, the company's products have 580 million global users and 4.5 million application developers.

On the day Amazon announced Kindle's pullout, the iReader's stock value jumped 10 percent of its daily cap, while Hanvon's increased by almost 3.5 percent.

According to the China Federation of Radio and Television Associations, audio reading drew over 800 million active users in China last year, a rise of 230 million over 2020. Audio reading functions, in particular, help elderly readers transcend the "digital divide." Several e-book platforms have concentrated on improving the audio reading experience.

As of Sunday, Dedao, an online content provider, had 54,627 e-books online, with 30 to 40 new books added every day, at the same rate as the Kindle China shop.

To supply content to users, it has partnered with 200 publishers and influencers. In the meantime, it has teamed up with Boox to release a number of Dedao-branded e-book readers. 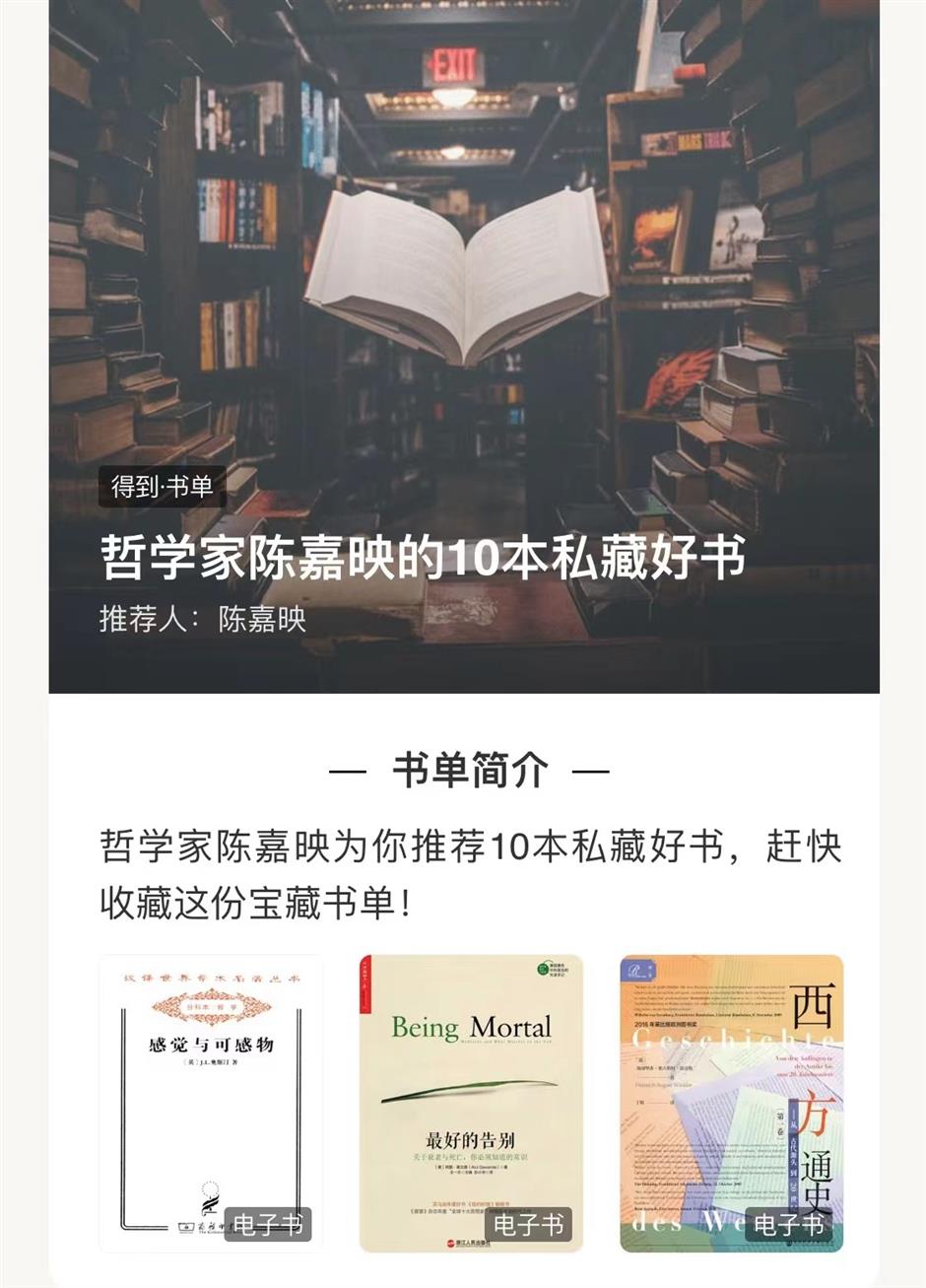 Dedao's unique content includes audio books and lectures by invited celebrities and professionals on topics such as social science, business management, booklist recommendations, law, and other topics. Rather than just being an e-book store, the platform wants to provide customers with the experience of a "lifelong online school."

The book and themes on Dedao are all about China, with chapters on Chinese literature, Chinese society, and stock issues, as the country has a large number of individual stock investors. It also provides users with full-text search capabilities, which are beneficial to Chinese students and academics.

Ximalaya, a Shanghai-based online radio network, is a key contributor to audiobook resources across the country. By April, there were 1,000 columns, and audiobooks were played more than 100 million times each.

Studies show that the pandemic, changing user habits, and better and more targeted audiobook production have all increased the demand for digital reading.

According to the most recent Amazon statement, Chinese Kindle owners who have already purchased e-books will be able to download them online until June 30, 2024. After that, they can only read the ones that have been downloaded.

It's the "tears of the new age," according to Internet users, some of whom have spent a lot of money on the Kindle store.

Several Chinese companies, who did not want to be identified, are in talks with Amazon China about taking over its Kindle store. If an agreement is reached, Chinese Kindle users would be able to continue using their service after the 2024 deadline.