Blue vs white: The job market leaves some hot under the collar 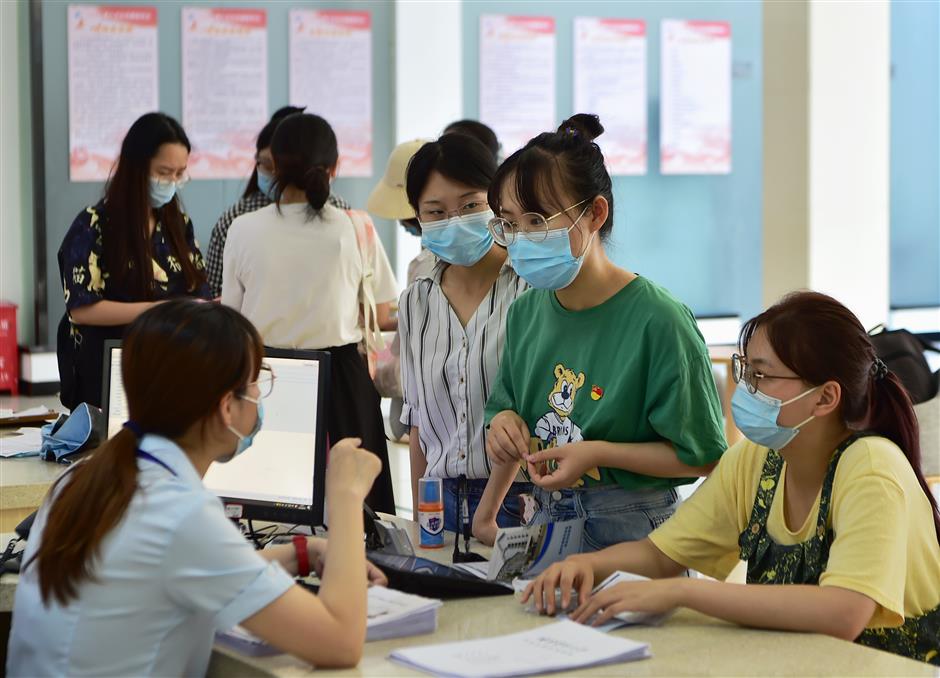 University graduates visit a local career service center to consult about favorable job-seeking policies in Fuzhou, Fujian Province, last week. The number of urban job seekers in 2022 is the highest in years, which includes a record 10.76 million college graduates.

Michael Chen, 21, graduated from vocational school with a degree in electrical machinery and promptly received three well-paying job offers. A cousin almost his age graduated from university and can't find a job, so he is preparing to take the postgraduate university entrance exam in December.

The job market, however, tells a different story. Demand for vocational skills is pushing up salaries, while university graduates are floundering to find a job amid a somewhat stagnant pool of demand.

Indeed, a record 10.76 million college and university graduates are looking for jobs, while many companies are on the prowl for workers with vocational qualifications.

Industry insiders tell Shanghai Daily the situation goes beyond a persistent mismatch between jobs and skills. The whole employment framework is in the throes of change.

Businesses are altering job descriptions to adapt to digital makeovers; young people are revising their work attitudes post-pandemic; and companies are scrambling to regain their profit footing after lockdowns.

She adds, "At the same time, youngsters want jobs; they just don't necessarily want yours. They value stability, health and family much more than previous generations." 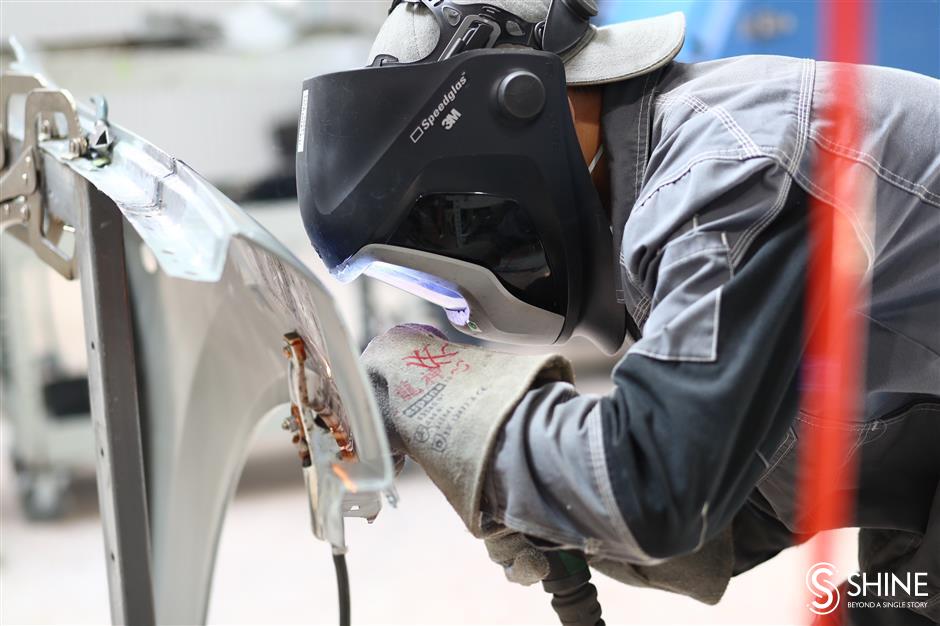 A student prepares for a WorldSkills Competition event in 2019. Vocational training has long been considered the poor cousin of academic studies, but in recent years, it has gained more attention as China's real economy needs a large number of technical personnel and craftsmen.

About 44 percent of companies say their biggest challenge now is to find the workers they need, according to a National Bureau of Statistics survey of more than 90,000 companies last year. That is the highest percentage in recent years.

At a recent press conference, the bureau also reported the highest level of unemployment among urban youth since China began tracking that segment in 2018.

In May, 18.4 percent of Chinese urban residents aged 16 to 24 were unemployed, up by 0.2 percentage points from April. Their jobless rate in March was 16 percent, compared with 13.6 percent a year earlier.

These numbers don't reflect the 10.76 million students graduating this summer and hitting the job market.

"It is mainly a heightened mismatch in supply and demand," the bureau said. "The pandemic has caused companies to recruit fewer people, while youngsters now tend to look for vocations with more stability."

That mismatch is reflected in more detail in the list of 100 jobs facing the worst shortage of labor in the first quarter, published by the Ministry of Human Resources and Social Security.

At the top were sales people, waiter and waitresses, lathe workers, security guards, deliverymen, cleaners and packaging workers. Thirty-six jobs in the list were manufacturing-related, while another 36 were in the services industry.

These are not the type of jobs traditionally sought by university graduates.

"It's true that blue-collar jobs are less respected and less desired, even when they pay high salaries," said Cindy Cao, human resources director at a Shanghai-based logistics company.

"Our umbrella company has two factories in Shenzhen, and we often ask jobseekers if they are willing to take a factory position – not as line workers but as project manager trainees," she added. "The majority of them say no." 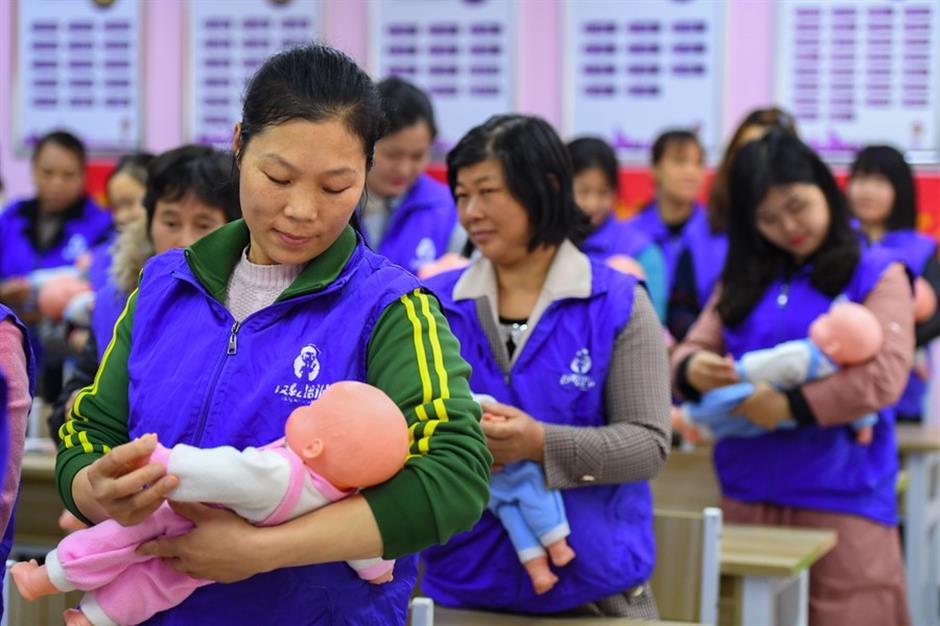 State news agency Xinhua reported that the 10 key areas in China's manufacturing sector will need a labor force of close to 62 million by year 2025, which translates into a shortage of nearly 30 million workers.

Recognizing the problem and persistent public perceptions, Chinese authorities have issued a series of policies intended to rebuild the nation's vocational training system and improve the perceived value of vocational education.

The revision came into effect on May 1.

The law also promises to reward companies who undertake industry-education integration. In other words, businesses should deepen ties with schools and raise the profile of technical personnel.

Higher demand for vocational skills is now reflected in salaries.

In 2020, the average wage for technicians was 9 percent higher than the average Shanghai wage, and for those with higher certifications, the figure rose to 16 percent.

Business media outlet Yicai Global reported that one Dongguan (in manufacture-heavy Guangdong Province) vocational school attracted more than 10,000 job offers from 320 companies for its 2,249 interns and more than 2,500 graduates at its campus recruiting in mid-June.

The companies included 10 from Fortune 500 companies, six from China's Fortune 500 and 31 listed on the stock market. The average starting salary was about 6,000 yuan (almost US$900) a month, while some companies were offering as much as 16,000 yuan.

Public perceptions about blue vs white collar jobs may take longer to change.

Vocational school graduate Chen referred a few factory management trainee jobs to his still unemployed academic cousin. The cousin turned up his nose at the suggestions and never applied.

"My parents told me not to," the cousin explained. "They say it would be an insult to the bachelor's degree holder."

HR expert Feng is not surprised.

"A structural mismatch is neither new nor unique to China," she says. "In an economy undergoing rapid transformation and driven by new technologies, you always have the problem of universities not being able to deliver talent with the new skills needed by the market as quickly as companies need them."

In an economy rapidly moving to the new digital world, company decisions are increasingly made on big data rather than on human analysis. Many companies just need to fill vacancies purely on a quantitative basis, without any creative or proactive thinking involved.

For many companies, it is a simple matter of "digitize or die."

"I'm having my employees posting product photos and ads in all their WeChat groups," said Chen Zhaoyuan, who owns a clothing factory in Zhejiang Province. "I never thought we would need to do that. We have a very stable customer base, both domestic and foreign fashion brands. But it all changed during the pandemic."

Chen said her daughter has made a few suggestions on how to increase productivity and make more mass-tailored, cheaper clothes. But Chen said she is focused on immediate survival for now.

"Companies and employees are both caught in a very painful transformation right now," Feng concludes. "Ideas that used to hold true no longer apply. This is an era that requires fast results, and you often see high turnover among young employees now. Both sides need to be more flexible and more patient."