Grandpa Chen, 72, waits outside a delivery storage station at 8:50am amidst the heat, and around 10 others are lined up after him. The notice on the door of the tiny space reads: Business hours 9am to 9pm.

It still wasn't open by 9:15am, while the line gets longer despite some who became impatient and left.

"Is it now a norm that packages are not delivered to your door?" Chen asks. "Why do I need delivery then?"

Shanghai Daily poses his question to three delivery companies via their customer hotline.

The answers were similar. Their customer service departments say packages are supposed to be delivered to your door, but suggest you put a bracket that says "deliver to my door" after your address, due to the increased number of packages and lack of couriers. 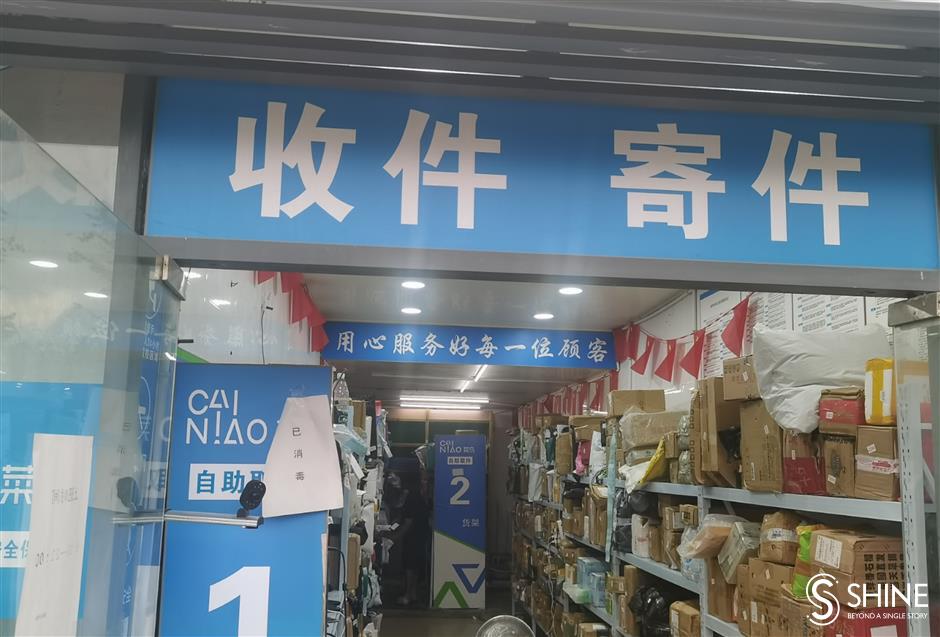 The State Post Bureau released a report in May stating that there were 108.3 billion packages in China in 2021, up by nearly 30 percent from the previous year.

That accounts for more than half of all parcels in the world, and means nearly 300 million parcels are being dealt with in China every day.

On the other hand, the Ministry of Human Resources and Social Security released a report of the 100 jobs facing the worst shortage of labor in the first quarter, and courier ranked No.7.

Smart locker service like Hive Box or storage station Cainiao under Alibaba's logistics arm were created partially to solve such problems, but new issues have arisen instead.

In 2020, Hive Box, China's largest smart locker company and owned by SF Express, was confronted by consumer boycott after it ended the free services that propelled the firm to popularity. Many consumers also complained about getting their parcels put into lockers without consent.

At the time, the Shanghai Consumer Council conducted a survey of nearly 40,000 customers. More than 40 percent said they never received a call or message asking for consent. More than half said they have encountered couriers who refuse to deliver to the door.

The consumer council wrote in a statement that "delivery companies are obliged to inform and get permission from customers before using a smart locker service."

Hive Box ended up reducing its charges and revising its system to help couriers get consent from customers.

Now the issue sees renewed complaints. With increased types of storage services, many consumers find it becomes difficult to get their parcels at home. Moreover, many don't even get a message to go to pick-up stations while their parcels are registered as "received" by couriers.

Hashtag "why has it become an unwritten rule for couriers not to deliver to the door" recently trended on Weibo. One tweet by the account of CCTV.com alone, the website of China Central Television, got more than 20,000 likes.

Some packages have to be put outside the station.

In Shanghai, it gets more complicated. Residents find their door-to-door delivery services to be among the last to return to normal as the city gradually reopens everything from restaurants to theaters.

Some neighborhoods simply haven't allowed packages to be delivered inside. But even for those that do, many couriers just don't do so.

"Most delivery companies don't really enforce the policy to deliver to the door, especially now you have so many packages and so few couriers. They know we make so little money that it is ridiculous to be too demanding," one courier surnamed Zhou told Shanghai Daily.

"It's troublesome to follow the updates of which neighborhoods are open for couriers. And simple as this, I make 30 to 40 percent more by delivering to a station."

Zhou is the outsourced courier for five delivery companies in his area, a common practice in the industry except for a few premium services that have designated couriers.

As an outsourced courier, Zhou has no base salary, meaning he had no income for a few weeks during lockdown.

In June, he made about 8,000 yuan (US$1,195), despite fines over customer complaints. He didn't get fined for not delivering to the doorstep – it was only required of him to re-deliver to the door.

By Zhou's own calculation, he would have made only a little over 5,000 yuan if he had stuck to the rule and delivered every package to the door.

"I appreciate their hard work, and deliverymen helped so much during the lockdown," said Cindy Wang, an office admin in her late 20s.

"But I just simply can't get my packages at all! I have to commute 90 minutes to go to work, and another 90 minutes back every day. They are only open 9am to 9pm, completely coinciding with the time I'm away from home."

"I understand the anxiety of the customers, but what can I do?" says the owner of the pick-up station where grandpa Chen tries to get his parcel.

"We used to have four to five hundred packages every day. Now it is two thousand. And there are just two of us. We are open 9am to 9pm, but we actually work until midnight to sort the parcels and everything."

Like Zhou, his station isn't designated for one company. It is "pick-up station" or "delivery supermarket" for three different companies, including Cainiao.

This could be confusing for consumers, whose messages notifying them to pick up their parcels don't necessarily give an exact address, station name instead.

Office admin Wang doesn't even get notified for many of her parcels, and had a few packages lost because she didn't realize they had arrived until weeks later.

"And I couldn't even return or get a refund from buyers or logistics companies because the products are registered as 'received' by couriers," she complains.

"If the companies don't have enough people, they should hire more. It's just ridiculous that we the customers bear the consequences. Aren't they required to deliver to the door? Is there any law or something?" 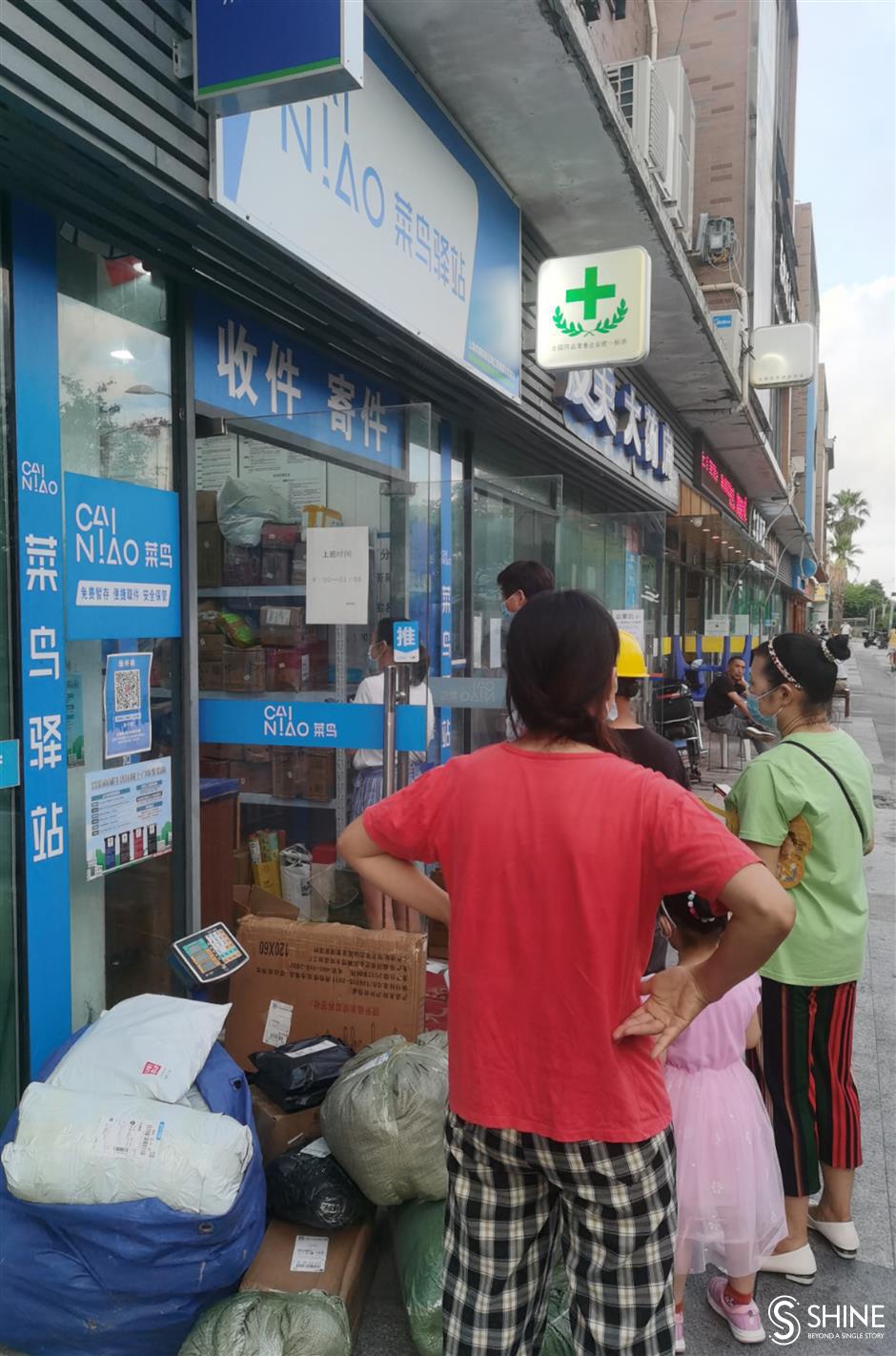 Long queues have become a daily scene at such stations.

Both delivery industry regulations and postal law make it clear that parcels must be delivered according to the name and address written. They also require delivery companies to get consent from customers when using locker or pickup stations.

In January, a revision of the industry regulation sought public submissions. The revised draft is more detailed in such issues.

It clearly states that delivery companies must not register parcels as received without customers' consent.

They must not store packages in self-pickup services including lockers or stations. The draft also states companies will be fined and warned by the relevant authorities if they violate such clauses.