Shanghai is an unusual place. Its hybrid of Eastern and Western cultures, and its blend of history and modernity are found nowhere else in the world. Boasting a history of more than 6,000 years, the city is the birthplace of the unique haipai (Shanghai-style) culture and the cradle of the country's civil aviation industry. It is also where the Communist Party of China was born. In this series, Shanghai Daily explores some of the city's origins and the country's significant firsts. 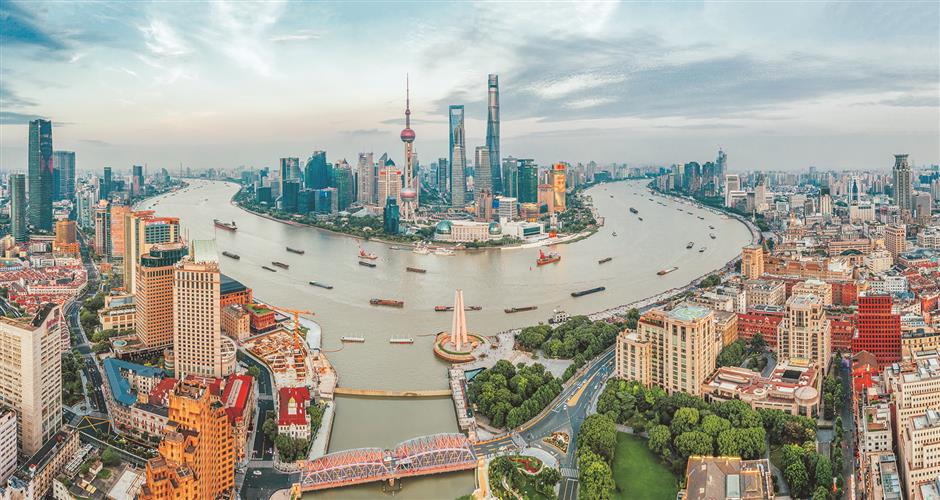 It is a sunny autumn morning, and the fragrance of sweet osmanthus fills the air. The perfect setting for a 1.5-kilometer walk along Suzhou Creek.

A lot of history has flowed through this waterway, so who better to accompany me on this jaunt than a man who is a longtime native of the vicinity?

Peng Yubin and I start our tour at the Monument to the People's Heroes, where the creek spills into the Huangpu River. Our destination is the former site of the Shanghai Chamber of Commerce, a group that helped make the city such a trade titan.

Suzhou Creek actually flows through six Shanghai districts in what is now a 42-kilometer waterfront pedestrian corridor. We are experiencing only a small slice of its course.

"It is truly the mother river of Shanghai."

Normally, the mighty Huangpu River claims that honored title. But Zheng Zu'an, a history researcher at the Shanghai Academy of Social Sciences, said in an interview that Suzhou Creek is the mother of the Huangpu River in terms of their history.

I check the city's official map and find that the formal name of the river is still Wusong River (Suzhou Creek). Wusong is the historical name of the area.

The river took on the current name after Shanghai was opened as a treaty port in 1843. Foreign businessmen discovered that the river was a convenient water route to the city of Suzhou in Jiangsu Province, the silk capital of China. Thus, the waterway became popularly known as Suzhou Creek. 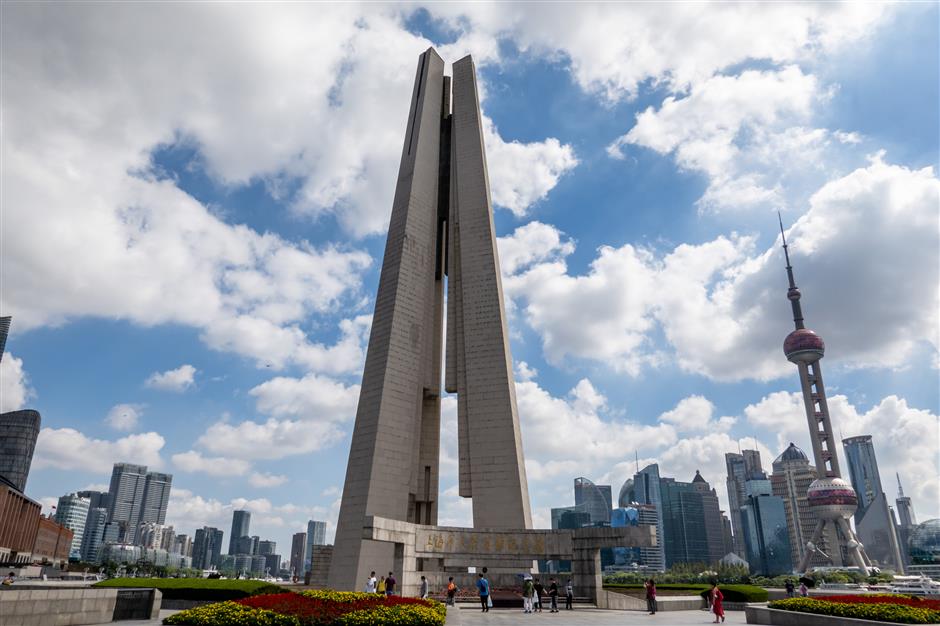 The sluice gate is closed as we approach it. Two egrets are resting on it.

History has a way of fading from the awareness of younger generations like me. To hear Peng talk about it makes our walk a sort of trip down memory lane.

"Back in the 1970s and 1980s, there was a stark contrast of colors between Suzhou Creek and the Huangpu River – one was black, the other brown," Peng says. "Living nearby, we always kept our windows closed to keep out flies and that dreadful stink."

Suzhou Creek is the birthplace of China's earliest national industries. Water pollution came with the industrial development of the city.

Rivers have always been important to humans, and Shanghai has long thrived on rich water resources that facilitated irrigation for farmland and transportation for trade. Thousands of factories were built along Suzhou Creek: textiles, flour, beer, minting, printing and clothing.

As prosperity grew, so too pollution. Untreated human waste and industrial effluent flowed unchecked into the creek.

"The number of cargo ships was increasing, and the boatmen just threw their garbage into the water," Peng says.

He recites an idiom describing Suzhou Creek in the latter half of the 20th century:

"Water was used to wash rice and vegetables in the 1950s, and to wash clothes and irrigate land in the 1960s. The water turned black and fetid in the 1970s, and no shrimp or fish could be found there anymore."

In the 1980s, the city resolved to do something about this eyesore in its heart. An environmental overhaul was ordered.

"In 2010, when Shanghai hosted the World Expo, it was such a relief to see that the creek water had become clean and the putrid smell gone," Peng tells me.

Many of the factories along the creek have been converted to clean commerce.

A cotton mill built by businessman Zhou Zhijun in 1917 has been transformed into the popular M50 art hub, housing 140 art studios and culture-related businesses. 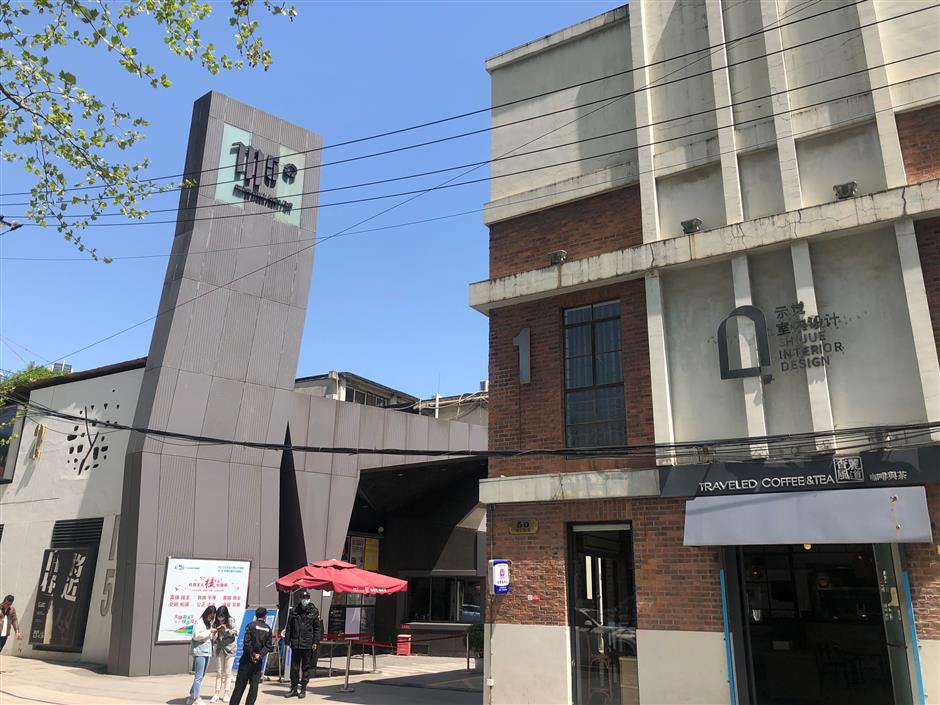 The popular M50 art hub is transformed from a cotton mill built by businessman Zhou Zhijun in 1917.

We continue our city walk. Just a few steps away from the sluice gate is the landmark Waibaidu Bridge, the first all-steel bridge in Shanghai and the only surviving example of a camelback truss bridge in China.

Built in 1907, the bridge has always been a local showpiece, appearing in numerous Shanghai-themed books and movies, and, yes, wedding photos.

Peng asks me if I know the origin of the name of Waibaidu Bridge. I confess I am stumped.

He explains that the bridge replaced an original wooden bridge built by British businessman Charles Wills in 1856. Wills named the bridge after himself and charged a toll. In 1872, the Shanghai Municipal Council bought the Wills Bridge and built a new, toll-free bridge in the next year. Locals called it "Waibaidu Qiao," which literally meant "outside the free ferry bridge."

As we stroll on the bridges, I am filled with a sense of tranquility as sunshine dances across the water. 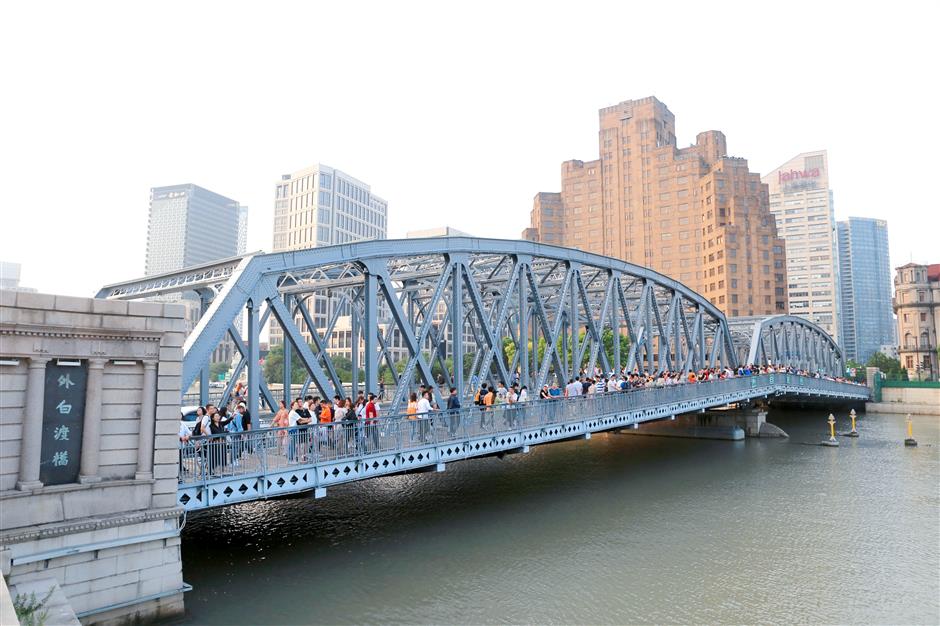 Waibaidu Bridge is the first all-steel bridge in Shanghai and the only surviving example of a camelback truss bridge in China.

While walking may be the most soulful way to enjoy Suzhou Creek, those who aren't so energetic will be able to cruise its waters. Eight new docks will be completed by the end of 2022.

Four of them – the Waitanyuan, Sihang Warehouse, Changhua Road and Changfeng Park piers – have been put into trial operation while the rest will come into use before the end of the year.

Cruising evokes memories of the romantic film "Before Sunset," in which a couple of long-ago lovers reunite for a single day in Paris and take a boat tour along the Seine. I wonder whether such a dreamy scene will be re-created on Suzhou Creek.

"As a Shanghai native," Peng says, "I truly feel that the city has undergone dramatic changes that have rendered it even more beautiful. Both Suzhou Creek and the Huangpu River bear witness to the vicissitudes of the city."

The cruise route on Suzhou Creek connects eight piers. Four of them – the Waitanyuan, Sihang Warehouse, Changhua Road and Changfeng Park piers – have been put into trial operation while the rest will come into use before the end of the year.