Don't hang up! Here's the latest on the fate of oldfangled phone booths

Shanghai's iconic red public telephone booths carry a certain nostalgia for people over a certain age, but they don't carry much weight in the digital age.

Wu Duan, an associate professor at Tongji University, still remembers the first four numbers of a campus public phone she often used 20 years ago: 6598. The kiosk was her only link to family and friends.

"It's an emotional thing to many people of my generation," said Wu.

Today, there is only one phone kiosk left on campus, and it's obsolete.

Wu, who teaches in the College of Design and Innovation, and several of her students recently launched a campaign to renovate old telephone booths in the nearby community of Siping in Yangpu District.

Her aim is to keep them alive by modernizing them with innovative designs and new technologies such as 5G, wireless phone charging and touch screens.

The earliest known phone kiosk in Shanghai was installed on the Bund by a British businessman in 1882, only six years after its invention in the United States.

The first public phone appeared at a community tobacco store in Hongkou District in 1952. In the ensuing decades, the kiosks provided invaluable communication for residents. 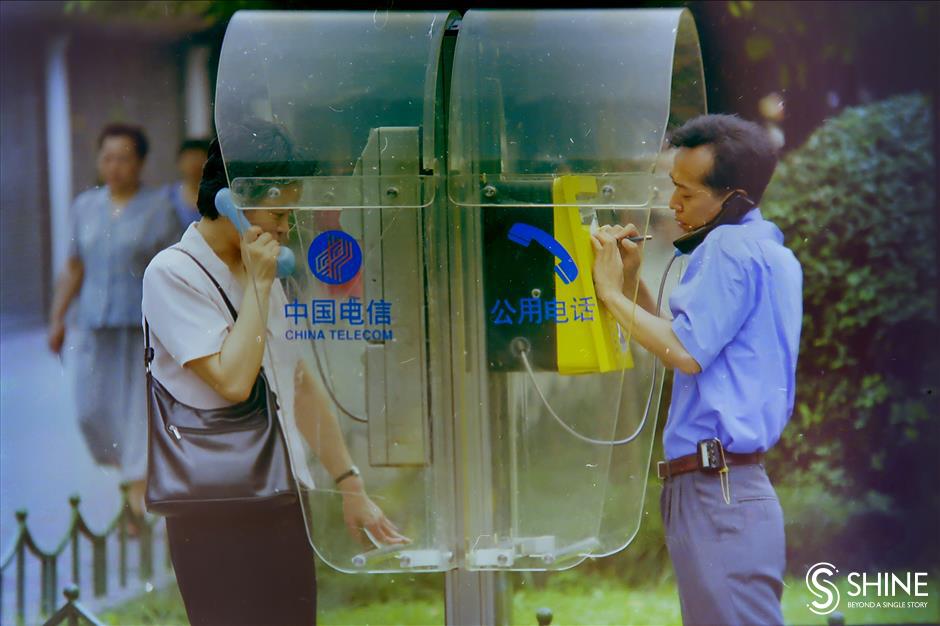 In the old city lane neighborhoods, it was once common to hear community workers yelling to residents that they had a phone call. Later, people could use the phones in the public booths with coins or smart cards.

In 2006, there were 10,000 telephone booths across Shanghai, but the number has halved amid the popularity of mobile phones. Most of the booths that remain are largely for emergency calls. Few people actually use them.

There was once a fierce online debate about whether or not to keep some dozen telephone booths along the Nanjing Road Pedestrian Mall. Naysayers argued that the booths were passé and useless. Proponents defended them as cultural icons.

"I used to call my parents, who are migrant workers in another city, with a smart card in a public phone," one netizen wrote. "After three rings, I would hang up and that was the signal for them to call me back. It saved me money."

One man said he would call his wife from a public phone near home whenever they had had a spat because she would only answer calls from an unfamiliar number.

"I spent most of my monthly salary on smart cards to chat with my boyfriend, who worked in another city," one woman recalled. "It is a bittersweet memory of a romance that went sour." The future of public phone booths has been debated in many countries.

The UK stopped building new telephone kiosks in 2001, and the existing ones are gradually being phased out. There are now about 20,000 telephone booths, compared with nearly 100,000 before.

New York City has announced plans to upgrade about 10,000 public phones along highways, equipping them with free Wi-Fi services and advertising to cover the maintenance costs.

The "Wind Phone," an unconnected telephone booth in the Japanese town of Otsuchi, has received over 30,000 global visitors, who can carry on one-way conversations with their dearly departed. It opened to the public after the 2011 earthquake and tsunami that killed over 15,000 people.

Some phone kiosks in Nara and Osaka have been renovated into goldfish aquariums as novelty street attractions.

Closer to home, a bronze sculpture entitled "Telephone Girl" has become a landmark on bustling Huaihai Road M. The figure is deemed to be the "daughter of Shanghai" because she is said to be "listening to the beat of the city." The sculpture, created in 1996, has had several reconstructions after being damaged multiple times.

After the COVID outbreak in 2020, a face mask appeared on the sculpture. It wasn't removed by authorities. Professor Wu said there are ways of salvaging public phone booths. She noted that London's iconic kiosks are printed on postcards and turned into fridge magnets, keyrings and other souvenirs.

Why can't Shanghai's phone booths be salvaged through similar creativity?

Based on the design of Wu and her students, several "new booths" have been unveiled on Chifeng Road, an old worker's community populated largely by senior residents.

Pedestrians can charge their mobile phones in the booths and use the touch screen to get information on community activities or urban renewal projects. Wu said the booths could become the prototype of an "information service booth of the 5G era."

The booths are part of the university's Neighborhoods of Innovation, Creativity and Entrepreneurship 2035 project, which aims to offer a glimpse of future community life. 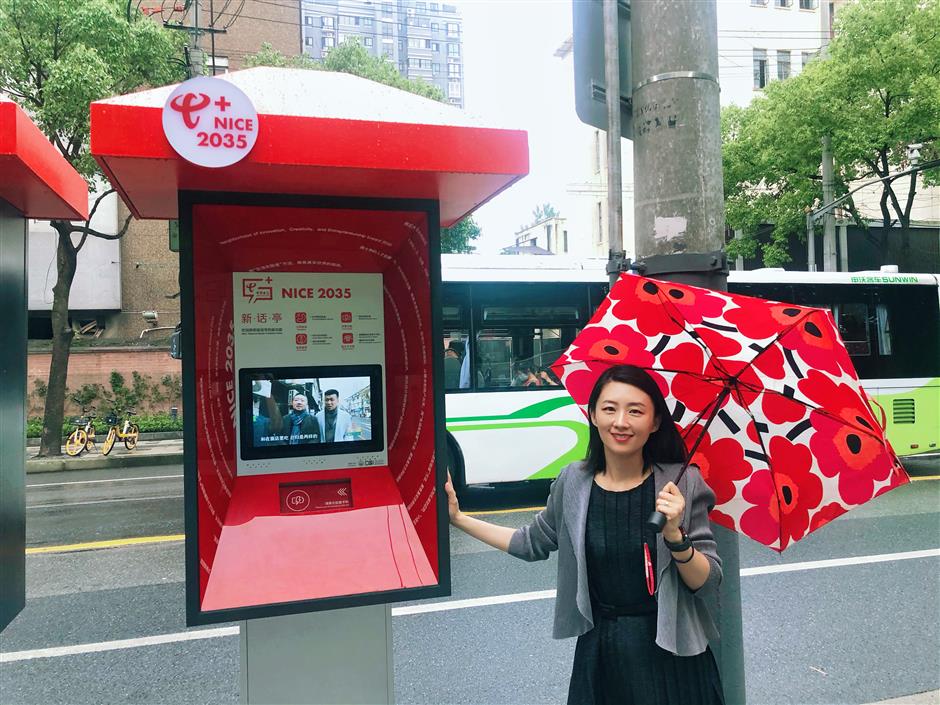 Professor Wu Duan at one of the remodeled phone booths she and her students designed for Chifeng Road in Yangpu District.

Another booth design created by Wu's team has been established in the ancient town of Nanxiang in outlying Jiading District. It offers tourism information, digital postcards and mobile phone-charging services.

Her students have come up with more whimsical ideas, such as turning the booths into robot café houses, emergency medical service stations, miniature convenience stores and even COVID testing sites.

"Though most of them probably won't ever come to pass, it does show the infinite potential of creative thinking about the urban landscape," Wu said.

The kiosks integrate 5G and artificial intelligence, offering one-click services for taxi-hailing, medical appointments and information on nearby retail outlets and COVID testing. They are designed mainly to assist the elderly.

Still, the basic phone call function has been retained. Each user is allowed to make a free three-minute call.

China Telecom said an average of 3,000 calls are made from public booths in Shanghai every year, mainly emergency calls to the police.

"It is simpler to operate than a smart phone," said Li Huifang, 65, who lives near a booth in the Yangqu Community of Jing'an District. "I don't have to type in an address to hail a taxi or register complicated information to make medical appointment, as required on mobile phone apps." 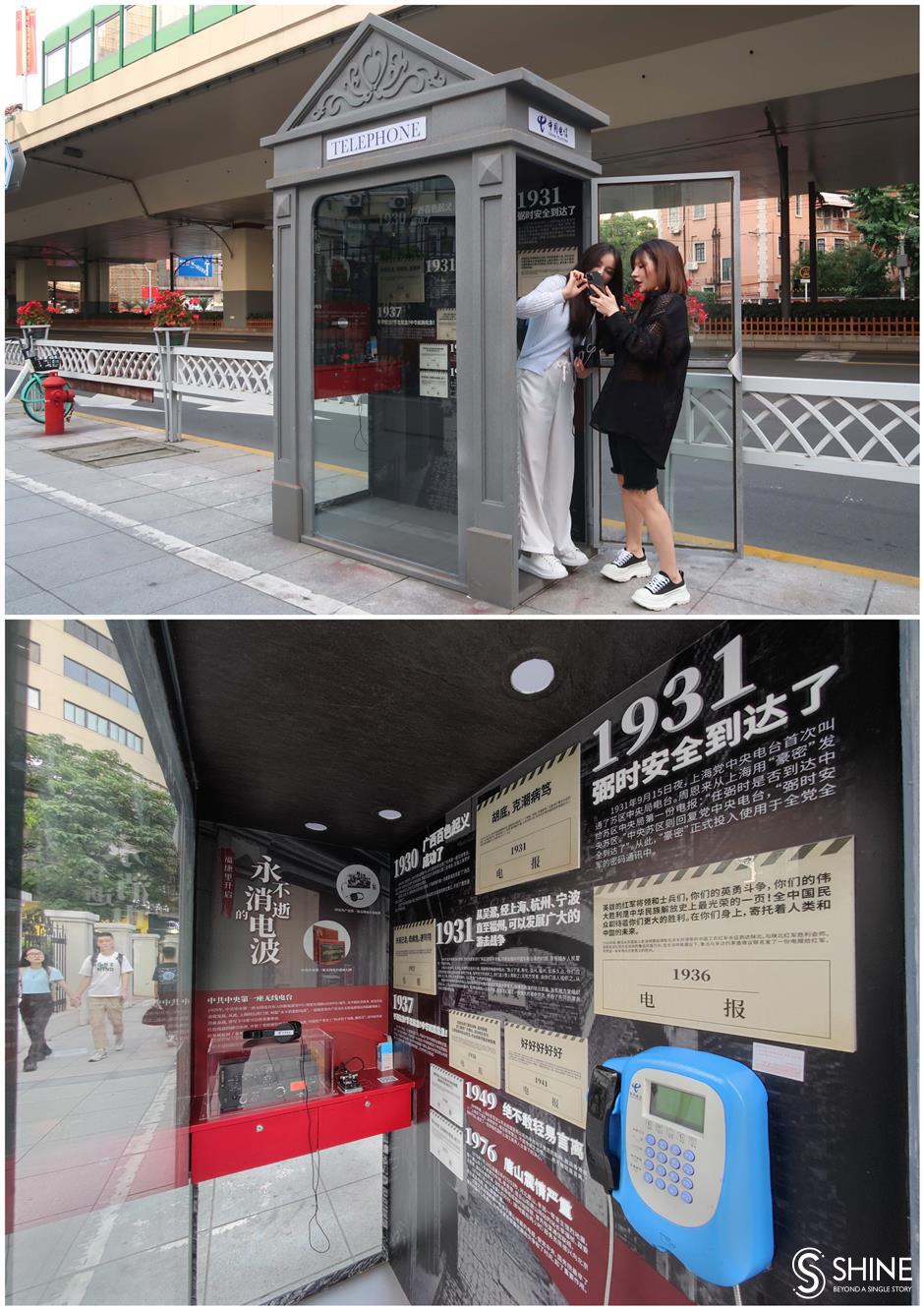 A booth on Yan'an Road W. near the former secret telegraph station of the Communist Party of China displays the working environment of early revolutionaries and the prototype of old telegram machine.

China Telecom said it plans to digitalize some 300 old telephone kiosks by the end of the year, with 1,000 upgraded by 2025.

Such smart kiosks also provide history of culture landmarks. A booth on Yan'an Road W. near the former secret telegraph station of the Communist Party of China displays the working environment of early revolutionaries and the prototype of old telegram machine.

The booth near the site where the Party's Youth League was established invites customers to call a special number to listen to the history of the area. 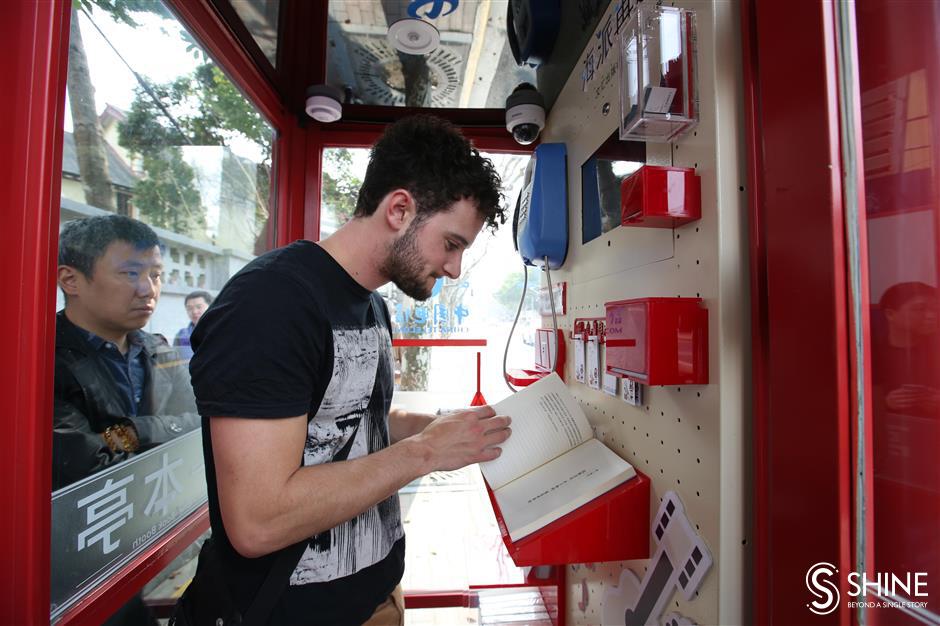 A foreigner reads a book after phone boxes were converted into mini-libraries in Xuhui District in 2018.

The most publicized rejuvenation of telephone booths was initiated in Xuhui District in 2018. Several booths near Huaihai Road M. were converted into miniature libraries and reading kiosks; others were turned into "celebrity booths" with photos and introductions to writers and artists who once lived in the area.

"It is a great idea to turn the telephone booths into reading rooms," said Alexis Miche, an expatriate from Nantes, France. "Passers-by and travelers need a place to relax and read. We have similar reading sites in French cities." 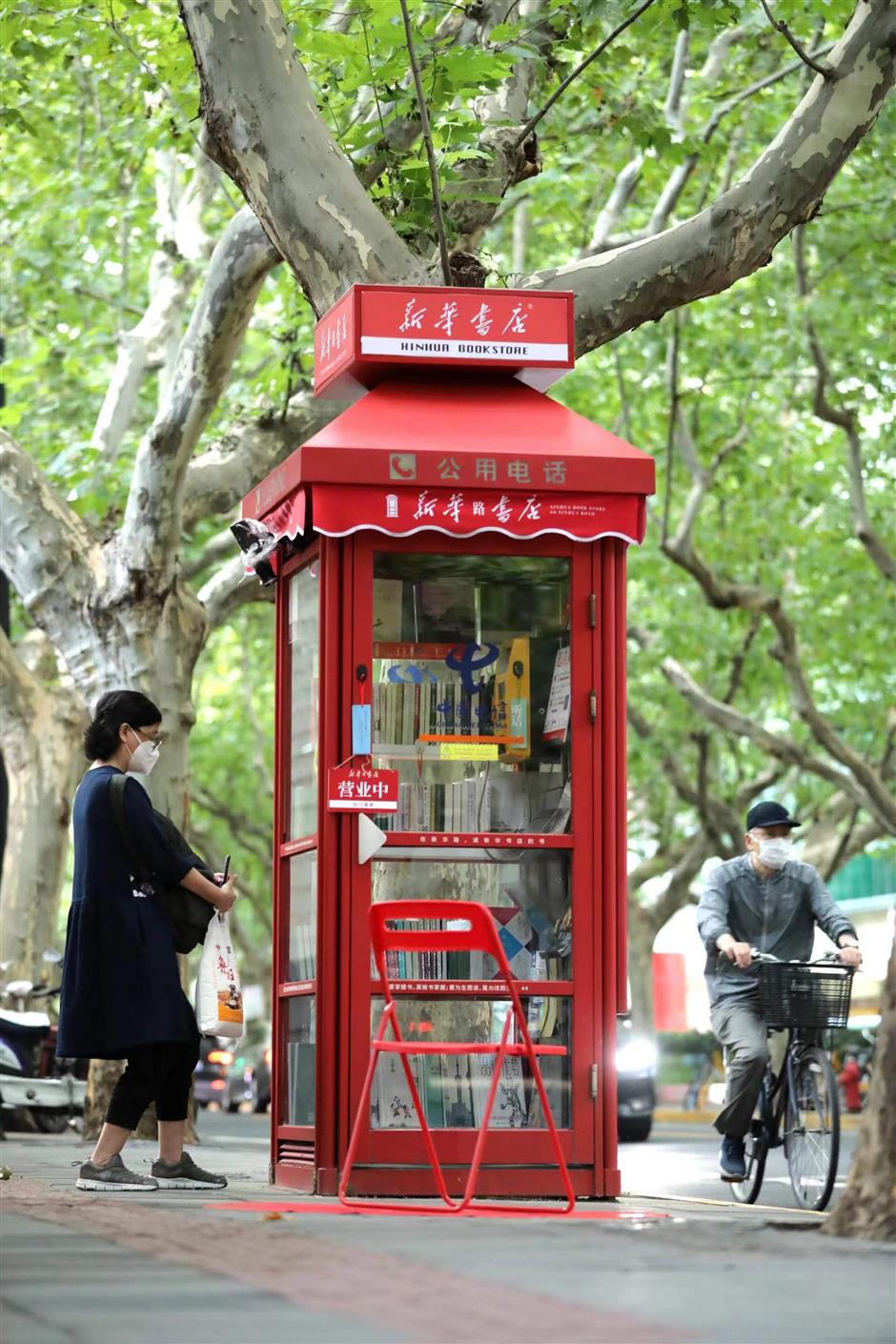 Five telephone booths on Xinhua Road were transformed into mini bookstores for five days during a flash mob activity this year.

However, few books are left in the reading kiosks nowadays because maintenance was affected by the COVID outbreak. The "celebrity booths," however, are still operating, with videos about literati.

Zhou Hongtao, a Tongji professor and Wu's colleague, led the renovation of 10 phone booths into miniature art galleries in the Siping Community. They feature the work of masters in traditional arts such as paper-cutting and clay sculpture.

He also said the booths could provide elderly residents shelter from rain or even venues for a bit of sunning.

"A mere 1-square-meter space can have a variety of uses to help and entertain residents," Zhou said. "The booths are, in a sense, the link between past, present and future urban life." 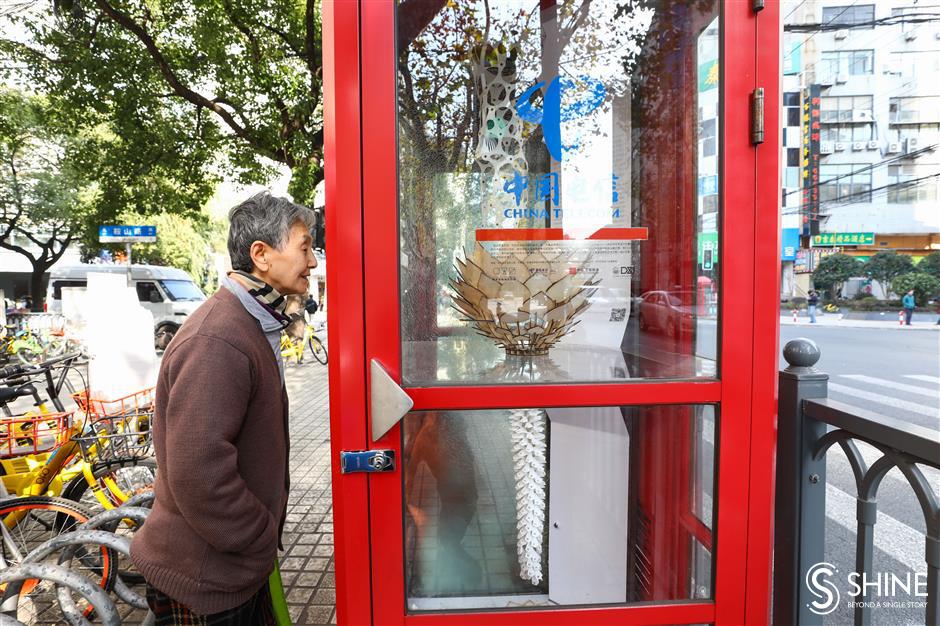 A resident views artwork displayed in a converted telephone booth in Yangpu District, the brainchild of Professor Zhou Hongtao. A telephone kiosk presents the life of playwright Ke Ling (1909-2000) near his former residence in Xuhui District.