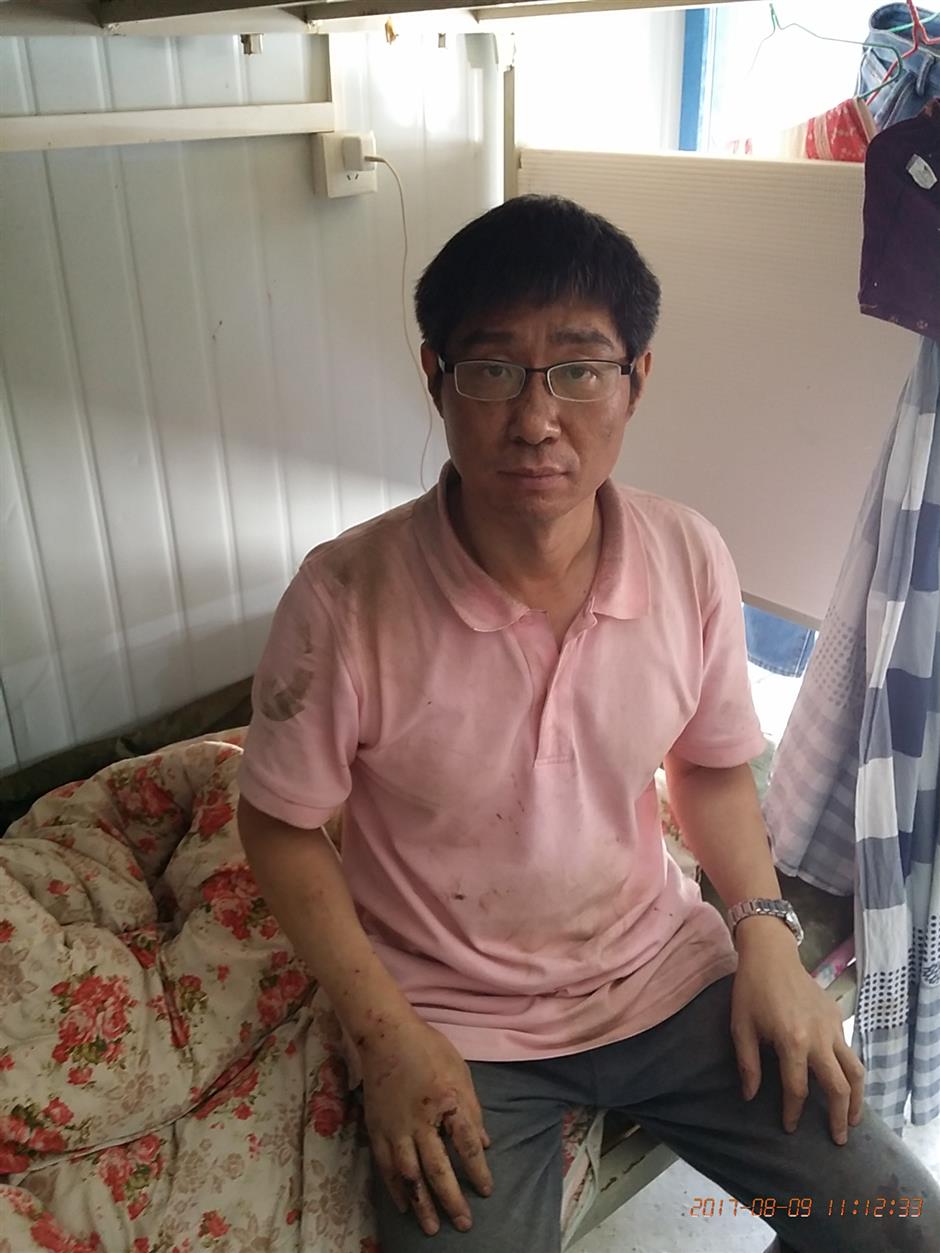 On a winding driveway in high in the mountains, Shanghai tourist Han Shengbiao put aside his personal safety without any hesitation to save others when the Jiuzhaigou earthquake happened.

Han is a 43-year-old good samaritan whose brave deeds during the earthquake have moved many people following his exploits on social media.

The tourist bus carrying Han's family and another 17 tourists was hit by a falling rock on its way to the InterContinental Resort Jiuzhai Paradise at 9:19pm on August 8.

"My first reaction was it's a landslide," Han recalled.

Han was safe from any injury thanks to his seat position, but his wife Qin Yanli was thrown against the window and suffered a painful rib and skin wound. Having ensured she and their 11-year-old son were OK, Han turned to the task of saving others.

"I just hope more people can be alive at that moment," he told Shanghai Daily.

In fact two people were killed and eight seriously injured in the bus accident.

There were calls for help from the bus, and Han stepped on stones to climb back into the bus through windows because the door was destroyed. One man in his 20s was lying down on a seat, and was not breathing when Han found him.

A female tourist and her daughter were pinned by a big stone, which Han and three other tourists tried to move.

"It is very dangerous because falling stones can hit us at any moment," Han told Shanghai Daily. "I was very nervous but saving them was the most important thing."

The stone was very big and heavy, and Han and the other helpers could not shift it. They had to move it inch by inch with the help of a steel tube found on the bus, and finally rescued the woman and her daughter who had been pinned by it.

"We had no other thought, but concentrated on saving them," Han said. Unfortunately, the girl's thighs were totally broken, and she did not survive.

Han and some other tourists then looked for exits, but found both ends of the road blocked by stones.

"We were very desperate in complete darkness, and our cell phones had no signal," Han recalled.

But they kept dialing, and finally connected.

Meanwhile, Qin, who is a doctor, helped to treat the wounds of tourists.

At midnight, they saw light from across the mountains and they were finally rescued by workers at a nearby construction company.

"It was a big relief after hours of desperate waiting," Han said.

Han’s medical condition meant he was unable to obtain a regular tetanus shot at the local hospital, so he and his family had to go to Chengdu, Sichuan provincial capital, for a special tetanus shot.

Han's family arrived back in Shanghai on Saturday — their four-day tour uncompleted.

Han, who is a worker at the Shanghai branch of Agricultural Bank of China, has decided to donate 10,000 yuan (US$1,480) to the earthquake victims.

"Han is always hard-working and warm-hearted, and we are not surprised for his brave deed," said He Dong, a colleague of Han.