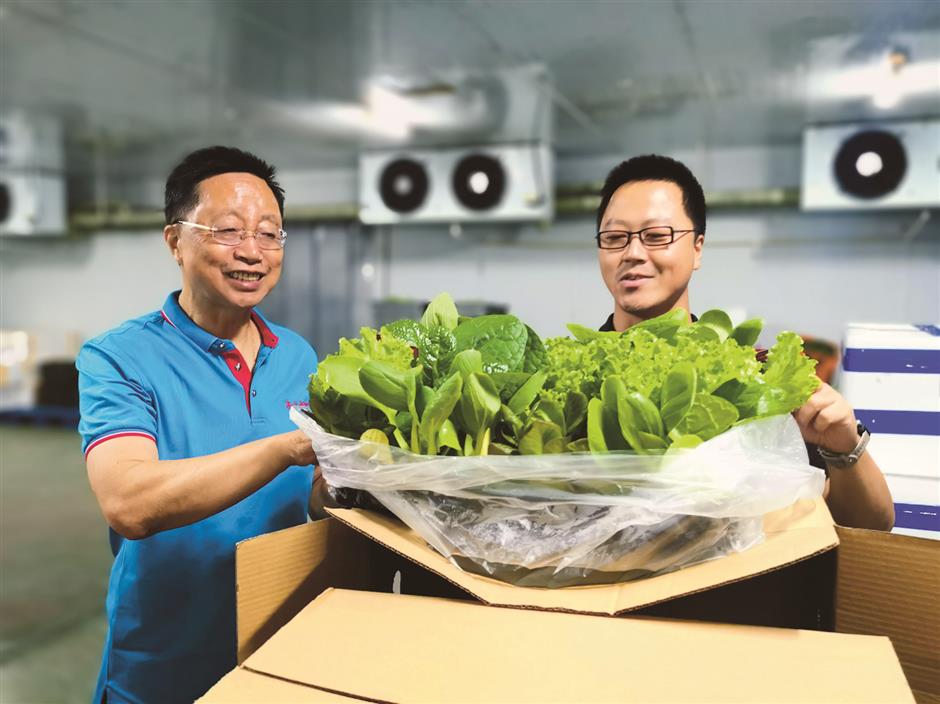 Lu Jihong (left) checks vegetables at the lab on one of his farms. Though he has become successful and wealthy, he has never forgotten his lowly roots.

Founder of a company with annual sales of 850 million yuan (US$ 120.76), he doesn’t enjoy sitting in his comfortable office all day. He often asks his driver to take him to his factory in Hangtou Town in the outlying district of Qingpu.

“I’ve been handling vegetables for more than 30 years,” he said as he lightly touched red peppers floating in water. “I feel unsettled if I don’t come and see ‘my old friends’ now and then.”

Lu is a billionaire who started out with nothing.

In 1983, he came from rural Anhui Province to Shanghai and couldn’t find a job. To make a living, he opened a small stall in a wet market on Jiaozhou Road in Jing’an.

There, in less than a square meter, he sold gingers and scallions. Amid more than 50 such stalls in the market, he soon stood out because he closed late and he sold fresher produce at cheaper prices.

“I had to hurry to the Shiliupu Pier about 2am every day to buy vegetables, and I returned to Jiaozhou Road before the sun rose,” he said. “My wife was there, preparing to open the stall. We stayed open until 8pm. There was never time to rest. I shall never forget those days.”

Back then, most of the city’s roads were paved with cobblestones. In order to transport more vegetables, Lu made a trailer of planks and four wheels. He labored to pull the trailer all the way from the wholesale market to his stall. The experience left him with chronic waist pain.

But diligence paid off. His business flourished and expanded.

One day an elderly lady took two decayed bamboo shoots to the wet market, seeking a refund. She couldn’t remember which stall had sold them to her, so she wandered around waiting for someone to own up.

Lu, out of kindness, picked up two quality bamboo shoots and gave them to her. Some days later, the woman returned with her daughter, who said the rotting bamboo shoots hadn’t been bought at his stall. It really impressed the old woman.

Sometime later, she returned with an order for 15 kilograms of bamboo shoots. For vendors, that was a big purchase. She insisted she would buy the shoots from no one but Lu.

After her, a man claiming to be her son visited Lu and set him up as a supplier of vegetables to a five-star hotel. Other hotels soon recognized the value of the quality but inexpensive vegetables and more orders rolled in.

Currently, Lu supplies more than 200 supermarkets across the country and more than 30 local luxury hotels. He also supplies about 70 percent of the vegetables used by reputable restaurants in Yuyuan Garden mall.

He supplies local universities such as Fudan University, hospitals such as Shanghai Children’s Hospital and popular tourist attractions such as the Shanghai World Financial Center.

No longer young in age, Lu has retained a youthful heart of gold. As his business grew, he started to expand the industrial chain.

Beginning in 2005, he started to buy farms in Anhui and Zhejiang provinces, including in Hexian County, known as the “vegetable garden” of the Yangtze River Delta region.

Currently, he owns five farms and had links with 40 other farms to ensure supplies of more than 160 vegetables, from the common potato to dendrobe stems, formerly used as an herb in traditional Chinese medicine.

His son, Lu Haiming, the company’s executive director, said they hope to “raise the threshold of the industry by looking at the whole industry chain.”

He added, “We are promoting our brand. New Zealand has Zespri and the United States has Sunkist. We still lack a high-profile brand name.”

Safety is a key factor in the food industry and one in which Lu has invested.

He established labs in his factories to test for pesticide residues and microbial levels of vegetables before they are put to market. Every year he spends millions of yuan to engage reputable testing firms.

“We have to ensure food safety at the source,” he said. “It protects consumers as well as my business.”

Last year, he bought more than 1,000 tons of potatoes from farmers, but they all sprouted. He didn’t hesitate to recall the sprouted potatoes from the vendors, which caused him to lose nearly 400,000 yuan.

“Even I lose money, I have to let consumers feel safe in buying our vegetables,” he said. “Reputation is something built up over a long time.”

Lu has never forgotten his roots. Over the years, he has donated about 5 million yuan to aid poor students, families in disaster-stricken areas and others in need.

“My mother told me never to forget any kindness I have received, and I have a responsibility to pay something back to society,” he said.