Over 3,000 vacancies at city's job fairs 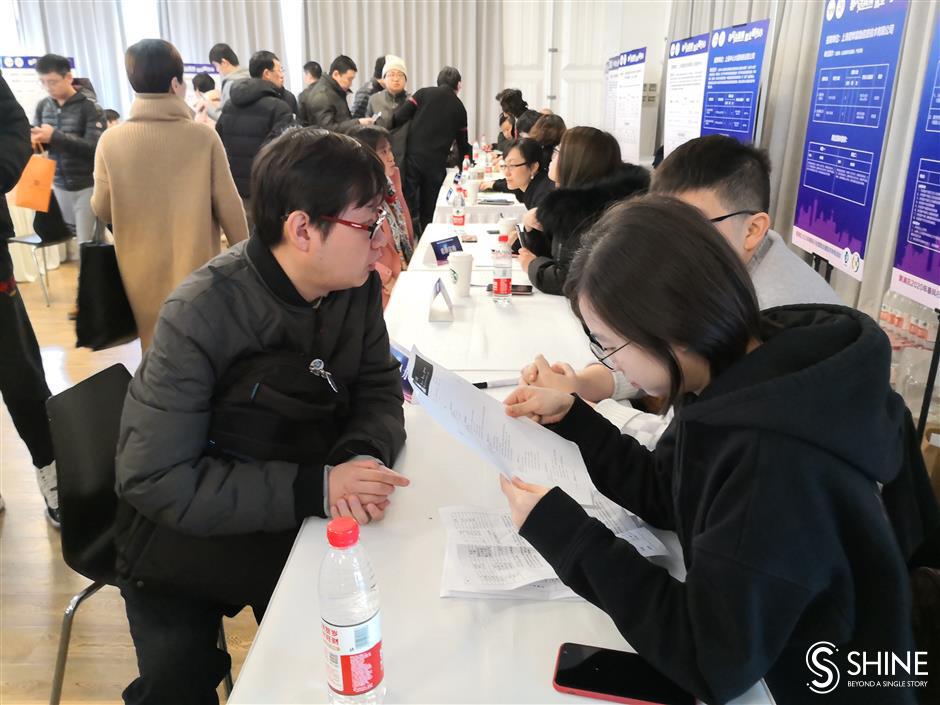 At a jobs fair on Wednesday in Huangpu District, 35 employers offered 859 vacancies and attracted 360 jobseekers.

More than 1,000 enterprises with over 3,000 vacancies took part in jobs fairs in Shanghai on Wednesday to kick off this year’s “Spring Wind Action” campaign to help people who had found it difficult to find a job.

At an event in Huangpu District, 35 employers offered 859 jobs, ranging from clerks and customer service staff to engineers, project managers and designers. It attracted 360 jobseekers, of whom 216 got the chance of second-round interviews.

Shi Bo, in her 40s, said she had been unemployed for “a very long time” and was looking for a job as a clerk.

“The fair is specially organized for unemployed people like me and there are plenty of jobs suitable for me,” she said.

There was also consultation on policies for employment aid, vocational training and job-seeking skills on the site.

Lan Lan, an employment service expert, said that at least five people had sat in front of her desk in the morning, seeking help in finding jobs.

“Most of them are around 40 with families to raise but felt a little bit desperate as they failed to find new jobs after quitting their previous ones,” she said. “I told them to know clearly what they wanted most, as well as their own capabilities and social reality. They should establish long-term career plans instead of making decisions on impulse. I also gave them some advice on improving their resumes and interview skills.”

Lan said such people were not the most difficult group to find jobs as they had a strong desire to work.

“The most difficult group have no intention to work at all,” she said. “I’ve seen young people working for only several months after graduating, then quitting and staying at home, complaining about difficulties in work. Their parents support their life and they have no sense of urgency to get a job and make a living by themselves. In such cases, we have to talk to them and also their parents to adjust their concepts and get them outside of the home gradually.”

The district’s employment promotion center has launched a mini program on WeChat, where jobseekers can check employment aid policies and submit applications on their phones.

Over 100 job fairs and employment consultation events will have been held around the city by the end of March, where people can look for jobs, training opportunities, internships and guidance in starting up businesses.

For those failing to find jobs at these events, human resources and social security departments around the city will provide services to help them get offers within three months.

Lan Lan, an employment service experts, talks to a man facing difficulties in finding a job.