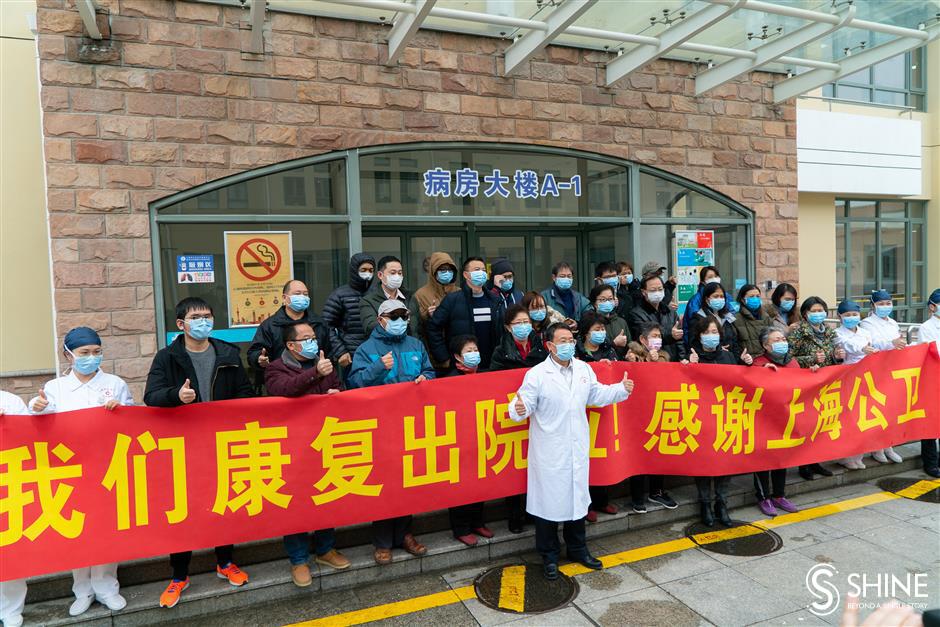 Twenty-eight patients who have recovered from novel coronavirus pneumonia thank medical staff at Shanghai Public Health Clinical Center when they are discharged on Friday.

Twenty-eight patients who have recovered from novel coronavirus pneumonia were discharged from Shanghai Public Health Clinical Center on Friday, with six of them agreeing to donate blood for COVID-19 virus treatment.

On Thursday, Zhang Dingyu, president of Jinyintan Hospital in Wuhan, said the hospital had begun a treatment which transfuses plasma from recovered patients to those still infected.

Liu Bende, deputy head of Jiangxia District No. 1 People's Hospital, said that since January 20 they had collected plasma from more than 20 medics who used to be patients and were willing to donate their blood which carries antibodies to the virus.

The plasma was sent to research institutions for safety tests and made into 3,000 milliliters for medical use. On February 8, nine critical patients at the hospital received blood transfusions. Results showed that 12 to 24 hours later the oxygen in their blood had risen and inflammation dropped. Their symptoms had all improved.

Liu believes the majority of recovered patients can produce antibodies to the virus. So currently, plasma therapy is the most effective method to reduce the death rate among critical patients.

Lu Hongzhou, head of the Shanghai Public Health Clinical Center, said plasma therapy had been used to treat epidemics such as SARS, H7N9 and H5N1.

"This time we also positively prepare for giving plasma therapy. Among the recovered patients, some of them are healthy and without any other disease. They offered to donate plasma to save the lives of critical patients.”

Blood will be taken about two weeks later when patients are completely recovered, Lu said.

Lu said the center has outpatient follow-up services for discharged patients. Some tests and preparation for making plasma will be given during those follow-ups.

The center had worked out detailed plans and prepared all necessary facilities for the therapy and one patient is ready to have the treatment.

According to the local health commission, all newly discharged patients had been or were living in Hubei Province or had contact with confirmed cases. They had gone to hospital after showing symptoms of a fever and coughing. Most were over the age of 40.

So far, 90 patients have been released from the hospitals.