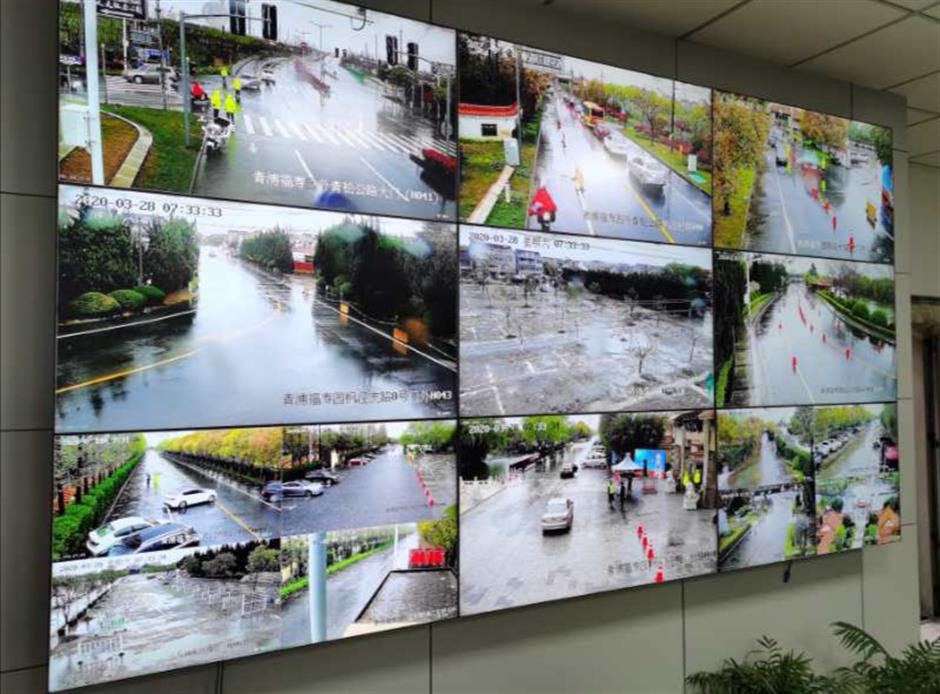 A screen displays the roads at Fushouyuan Cemetery in Qingpu District.

A visitor to Fushouyuan Cemetery has her temperature measured on Saturday.

Workers sweep tombs based on request at Songhe Cemetery in Jiading District.

More than 78,600 people visited cemeteries across Shanghai on Saturday to sweep the tombs of their ancestors as reservations are about to become mandatory during the Qingming Festival period.

Qingming, on April 4 this year, is when Chinese people clean family tombs and pay tribute to their ancestors. This year, visitors to cemeteries will be controlled via online reservations to prevent crowds.

The city’s 54 cemeteries and columbaria take reservations on their WeChat accounts with four two-hour slots available each day between March 28 and April 12.

A total of 105,000 slots are available for Saturday and 79,200 have been reserved, according to the Civil Affairs Bureau.

A total of 78,600 people turned up, bringing an extra 17,000 vehicles onto the streets, according to the bureau. In addition, 156 urns were interred.

Tomb sweepers are required to wear masks and present their health and reservation codes, the bureau said.

Burning items and setting off firecrackers are banned.

A maximum of 10 participants are allowed at each tomb.

Cemeteries have begun online tomb-sweeping via their websites or WeChat, enabling residents to pay tribute to their relatives online.

Since March 14, cemeteries and columbaria in Shanghai have received 825,000 online visits, according the bureau.

Cemetery staff can also sweep tombs for families if requested, following procedures such as cleaning graves, bowing and laying flowers. Broadcast and photographs can be provided. On Saturday, cemeteries and columbaria in Shanghai met 1,143 such requests.