A night market is bustling with shoppers and diners in Baoshan. The Double Six Nightlife Festival kicks off today in the district, featuring livestream broadcasts, night markets and food and music festivals.

The city’s former iron-steel industry hub aims to provide a boost to online and offline consumer spending while developing a group of nightlife towns to help get the economy back on track after the novel coronavirus outbreak.

Over 780,000 Argentina red shrimps were sold out online within half an hour of the district’s shopping festival launch, thanks to a livestream broadcast, hosted by Wang Hong, the Party secretary of Baoshan District.

“The price of the shrimps is really reasonable tonight, place an order quickly,” Wang said on her livestream debut at Baoshan shopping event’s launching ceremony on May 4, which was heard by over 300,000 people online.

Inoherbs, a domestic cosmetics brand based in Baoshan, has seen sales soar eightfold on year, while the number of online viewers increased fourfold.

These online promotion events have driven a rapid sales growth at brick-and-mortar stores in Baoshan. The 10 key commercial complexes in the district attracted about 4.5 million customers between May 1 and 24 with sales totalling 320 million yuan (US$44.9 million).

The sales at 30 key Baoshan commercial firms hit 1.25 billion yuan, an increase of 60 percent compared with that of previous months. Total consumer spending at Baoshan Wanda Plaza reached over 70 million yuan during the May Day holiday, a 15 percent increase on year despite the influence of the COVID-19 pandemic.

The city’s first nightlife economy town opened its curtain in the district with a number of night markets, featuring local agricultural products and seafood. Gaojing in Baoshan is a demonstration town to boost the economy with shopping, dining and traveling events at night.

Ten nightlife landmarks have been planned in Baoshan, including Bridgelife Innovation Park at the junction of Baoshan, Hongkou and Jing’an districts, as well as Wisdom Bay, an innovation park on 3D printing technologies.

Many of Baoshan’s nightlife sites evolved from the town’s industrial heritage. Bridgelife Park, for example, was renovated from a vacuum flask factory, while Wisdom Bay is the former site of Shanghai’s No. 3 Wool Textile Mill.

A seafood night market will be developed on Baoshan waterfront where customers will be able to taste fresh Yangtze River fish. Night markets will be open in Boashan agricultural towns at weekends, featuring many locally produced products such as rice from Luojing.

Cultural markets, to showcase local heritage skills and performances originating in Baoshan, will be held at night during holidays.

Shanghai is reviving its nightlife after shutting down noisy late-night bars and eateries over the past few years in response to residents’ complaints. The revival is part of the city’s aim to become an international shopping destination. The city aims to develop a prosperous nightlife economy between 7pm and 6am. Bars that meet requirements will be allowed to have tables on the street at certain times and some streets will be closed to traffic.

Wisdom Bay launched its first nightlife festival yesterday, which will run through June 27. About 200 stores at the innovation park have taken part in the event. Visitors are invited to enjoy beer, music and visit various museums along Wenzaobang River, the city’s third major waterway after Huangpu River and Suzhou Creek. 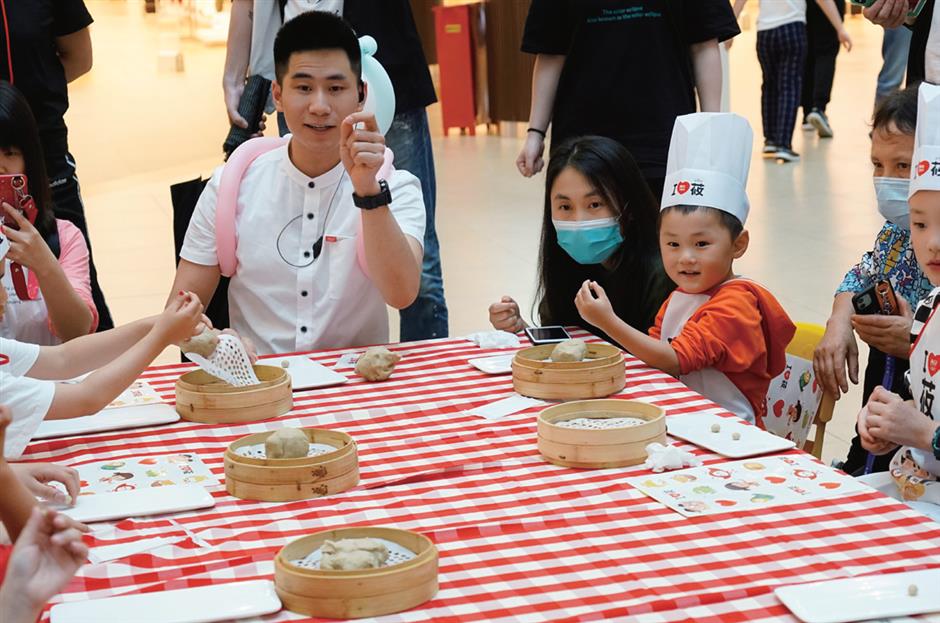 Luojing is to launch a “starry night” project where visitors can lie in a cottage hidden within the agricultural town’s forest and farmlands to look at the stars. They are also invited to the various agricultural events, such as hairy crab fishing and crayfish harvest.

Children can visit Mother’s Flower Culture Park, with more than 100 varieties of lilies, which represent filial piety in traditional Chinese culture and date back to Tang Dynasty (AD 618-907).

Many village houses and villas have been developed into homestay sites. Visitors can enjoy a traditional rural life while tasting many authentic delicacies. Popular restaurants in the Tangwan Village of Luojing, such as Pinshanfang and the Wang’s Courtyard, are opening till late and serving the 10 most popular Shanghai rural cuisines to the customers. Outdoor music and beer festivals have been planned for the summer, such as the Innovation Galaxy and Wanda Plaza. Over 30 stores and eateries will prolong their operations till 2am.

The Luodian ancient town will present weekend folk performances. The town dates back to the Yuan Dynasty (1279-1368) and was once the biggest marketplace in the area, known as “Golden Luodian,” but the “golden” tag gradually faded away in the face of urban development.

Immersive stage dramas, musicals and electronic sports games will be held at Innovation Galaxy and Wisdom Bay, along with other cultural activities to attract young customers.

Many museums, such as the Shanghai Museum of Glass and the China 3D Printing Cultural Museum, will host night tours, while bookstores will invite customers to read and share opinions.

Chen Yaoshui, deputy director of Baoshan, has been appointed by Shanghai Vice Mayor Xu Kunlin as Baoshan’s nightlife director. He is assisted by a number of CEOs from Wisdom Bay, Innovation Galaxy and Bridgelife to organize further evening events.