Six micro-movies won out among 56 entries in a film contest launched at Songjiang’s Yongfeng Community recently. They were awarded the titles of best story, original, cinematography, editing, positive narration and visual effects. 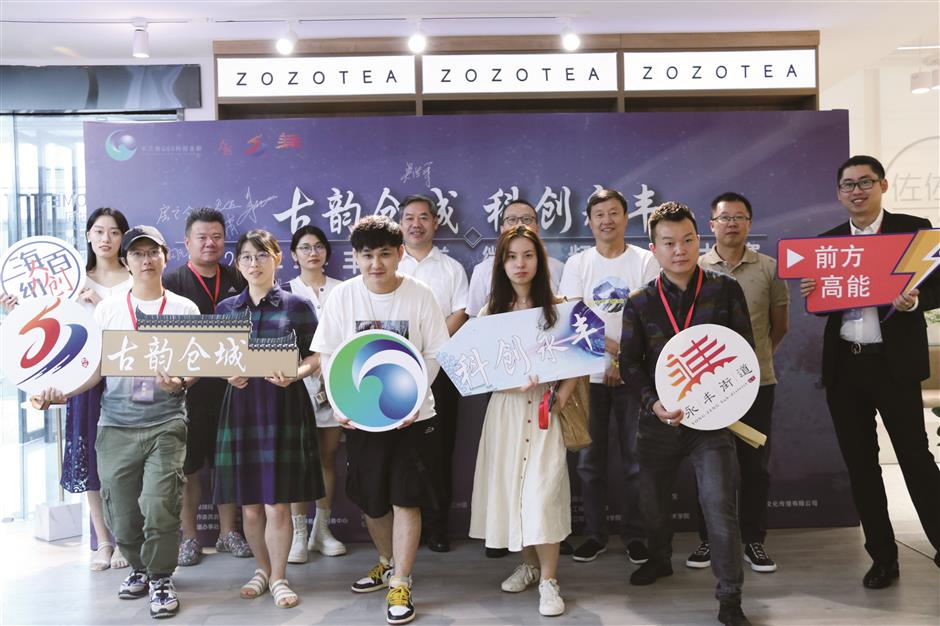 Contestants of finalist works pose with judging panelists after the final competition.

Starting from July, the 56 micro-movie entries pitched for six awards in a competition organized by Songjiang Employment Promotion Center and Yongfeng Community Affairs Service Center. Twenty entered a semifinal of 10-day online voting after the organizing committee’s preliminary review. Ten finalists were selected based on the vote and the judges’ overall evaluation. On August 28, six award-winning movies were generated and a closing ceremony to reward contestants was held on September 12. 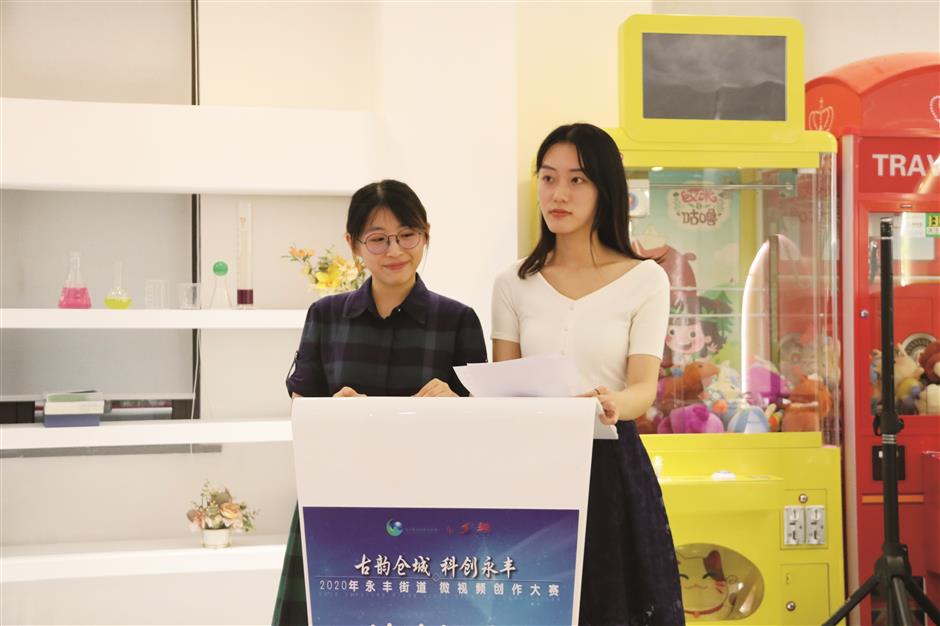 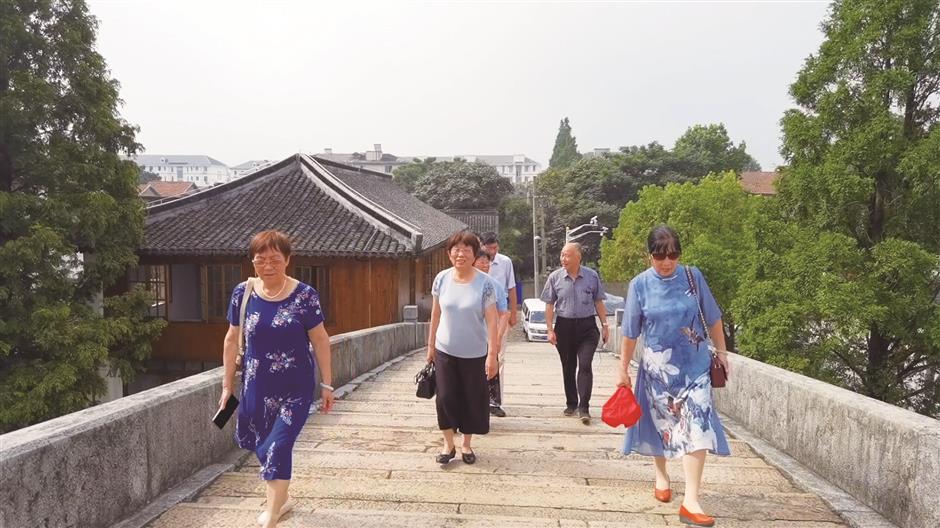 A screenshot from “Back to the Old Houses” in which former residents of Cangcheng ancient town reunite in their hometown.

Contestants No. 12, Yang Jingyuan and Shen Leyi, an undergraduate from Hunan Normal University in central Hunan Province and a first-year graduate student from Donghua University in Songjiang University Town, are both Songjiang residents. The two used to be acquaintances and their joint efforts in producing the movie “Back to the Old Houses” reshaped their relationship as a pair of good friends.

“We found a group of old residents who used to live in Cangcheng ancient town in Yongfeng Community. They were elementary school students who hadn’t seen each other for 60 years. Our film features their reunion back in the old houses of Cangcheng,” Shen said.

“Renowned Chinese sociologist Fei Hsiao-tung wrote in his book ‘From the Soil: The Foundations of Chinese Society’ that the Chinese people usually have a special attachment to their hometown and they care about their relationships growing out from the same patch of soil they used to live on. And ‘to search one’s roots’ is an important theme in our micro-movie,” Yang added.

Their movie, praised by judges for showing nostalgic feelings toward one’s hometown, was awarded Best Visual Effects in the final competition. 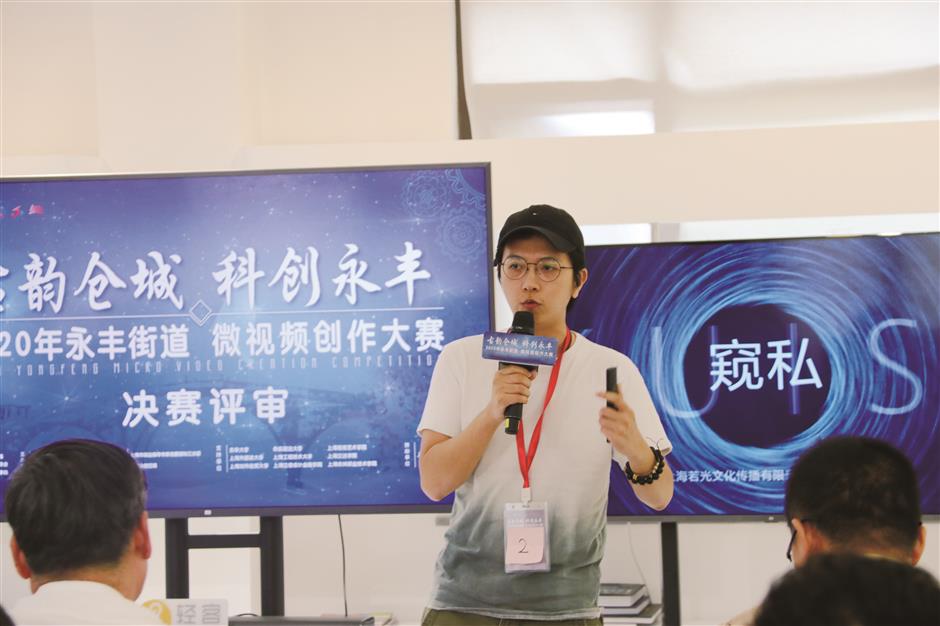 Contestant Sun Jiayuan does a presentation for his micro-movie.

Contestant No. 6, Sun Jiayuan, from his Songjiang-based Shanghai Ruoguang Cultural Communication Co, brought with him a six-minute micro-movie “Spy on Privacy.”

The film explores how a variety of mobile applications, while serving their users, are also recording the users’ lifestyles and preferences through data, and making their private lives more vulnerable.

The story features a girl’s dream. In her dream, all kinds of mobile applications are transformed into valets de chambre, helping the girl with her dressing, dining, living and traveling. The data generated through their interactions was later collected and analyzed in a secret meeting room and the girl no longer had a private life.

“We spent 13 days out of the total 15 production days in brainstorming a proper topic, the rest two days we spent in filming and editing,” Sun said.

“At first we thought about filming mental hazards concerning children brought up in single-parent families, but we revoked the topic as it was a small-niche one and we would like to find a topic that sounded more universal. In a group discussion, the mobile applications of the group members kept beeping and it dawned on us that we could make a film about mobile applications, data generated by them and the vulnerability of our private lives thereafter.

“The whole creation and production process was great fun. I posted an ad on WeChat to recruit crew members and about 25 people contacted me. I finally recruited 10 of them based on their locations. Some of them are my friends, some are competitors in other film companies, but we worked together on producing ‘Spy on Privacy,’” said Sun, the director, and “Spy on Privacy” was awarded the Best Original title in the competition.

“We gain inspiration about a film through constant intensive mental work or brainstorming. Diligent work paves the way for a momentary inspiration,” Sun added.

A scene from “Four Negative” in which an inheritor of Gu embroidery meets a foreign photographer in a bar.

Songjiang Qijia Youth Drama Club is a local theater company in Xinbang Town which is hailed as a “theater town” in Songjiang District.

Contestant No. 7, Mao Dun, of the youth drama club, also took part in the competition and their work “Four Negative” won Best Story.

“The film weaves a story between Gu Xiuli, an intangible cultural inheritor of traditional Songjiang Gu embroidery, and her granddaughter Yao Tingting. Gifted in doing embroidery, Yao was made an heiress of the family since her childhood. She was required to learn Gu embroidery under the strict coaching of her grandmother. But deep down in her heart, Yao preferred Western arts. She would secretly learn oil painting and multimedia art, go clubbing and have her own band. Until one day she encountered Jimmy, a foreign photographer who was searching for and shooting the traditional scenery in Songjiang, the girl’s tension with the traditional art form eased and found a balance with her pursuit of modern Western art form,” Mao said.

“There are in total four important photos in the film. The first is Jimmy’s recording of a somehow rebellious and confused Yao in a bar; the second is a photo of the Du Family Old Residence where Gu and Yao diligently and quietly practice Gu-style embroidery; the third photo captures the moment when Jimmy and Yao bared their hearts and the fourth is a snapshot of Gu’s back viewed from the perspective of Yao,” Mao added. 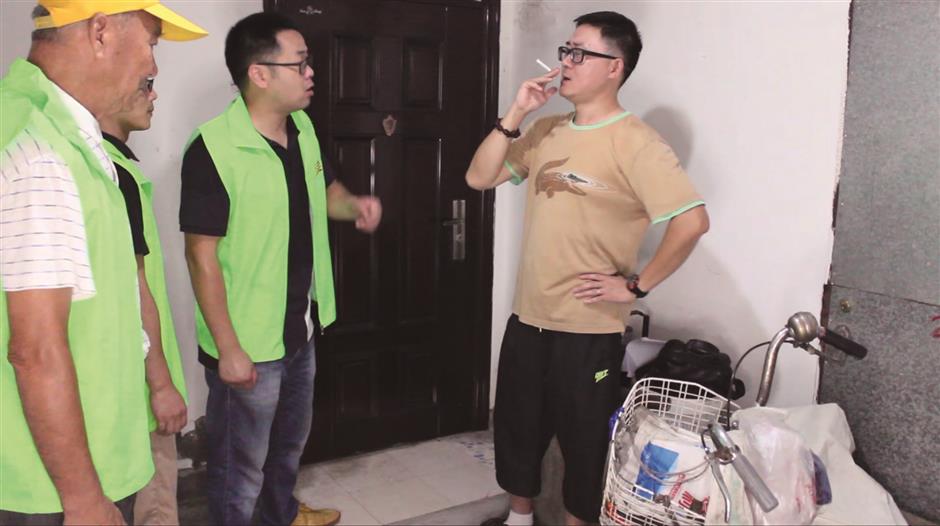 A screenshot from “The Screw” in which the protagonist, a community worker, carries out his daily routine.

Contestant No. 1 Lu Junyang is an individual participant and his work “The Screw” won Best Positive Narration.

“My film is about a day in a community worker’s life. He leads an ordinary life, but his life, like a screw in a big machine, matters to people around him in the community. And my movie pays tribute to him,” said Lu.

A screenshot from “The Du Family Old Residence” in which artists are performing Jiangnan sizhu (string and wind music).

“The Du Family Old Residence” by Contestants No. 9 Dai Furong and Wu Siyuan, and “The Past Cangcheng, the Current Yongfeng” by Contestant No. 16 Zhang Guoqing from Shanghai Boyan Creative Planning Studio, won Best Editing and the Best Cinematography respectively, both of them recording the beautiful scenery in Cangcheng ancient town.

“When filming a micro-movie, we should take into consideration our target audience. The majority of the audience for micro-movies are the younger generation and a fast pace with which the plot unfolds is essential, otherwise young people might get bored and lose interest. Participants of this micro-movie contest are hard-working and through their works we saw their talent and wisdom,” said Fang.

“Unlike traditional TV series, films and stage plays, a micro-movie has limited time. So to tell a story in a novel and impressive way in the limited time is quite essential. A playwright may use foreshadowing or flashback to tell his or her own story, and it’s not necessary for them to add every detail into the narration,” said Huang.

“Micro-movies are currently a popular film genre and we had felt sure that there are talented mini-movie makers around us in the city and we would like to attract them to Songjiang, give the limelight to them, as well as to Songjiang’s Shanghai High-tech Film and Television City construction,” said Lu Chunhong, director of the Yongfeng Community Affairs Service Center.

The Cangcheng Film and TV Culture Park in Yongfeng Community, since its establishment 10 years ago, has attracted more than 5,500 film and TV related companies to be based there. Its output value in 2019 amounted to 13 billion yuan (US$1.9 billion) and the park generated tax revenue of 1.655 billion yuan last year. Negotiations on launching new projects, including some with New York Film Academy, are ongoing.