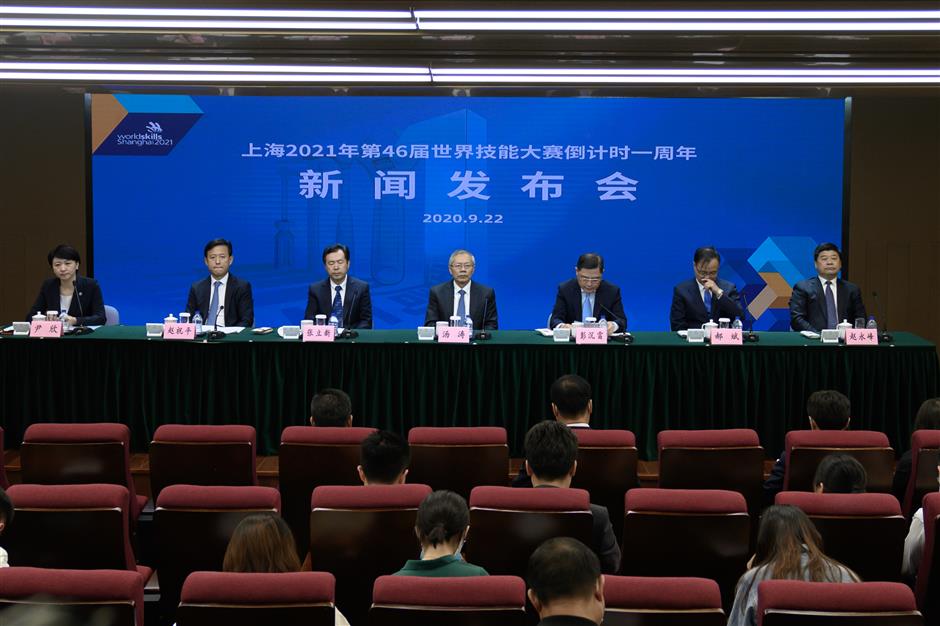 Officials outline preparations for the 46th WorldSkills Competition at a press conference in Shanghai on Tuesday.

Nine new skills projects will be added to the 46th WorldSkills Competition taking place in Shanghai next September, organizers announced on Tuesday as the city marks the one-year countdown to the event.

“All the skills are included in the existing category list to adapt the top skills competition in the world to the development of new industries and needs of new skills,” Peng Chenlei, vice mayor of Shanghai and deputy director of the competition organizing committee, told a press conference.

It will make the total number of skills categories in the event to reach 63, its largest. Among them, 53 were skills projects in the 45th competition and one was a combination of two skills in the 45th event.

All the 63 skills projects are now open to all members of the WorldSkills International for registration, said Zhao

Tang Tao, vice minister of the Ministry of Human Resources and Social Security, said preparations are well underway despite the COVID-19 pandemic.

“A special team has been set up in the ministry and Shanghai has launched the executive bureau to work in coordination,” he said. “And we’ve also swiftly moved our communication with the WorldSkills International online after the outbreak of the pandemic.”

He said that, despite uncertainties brought by the pandemic, organizers decided to move on as scheduled in consideration of the quick development of vaccines and other positive signs.

Zhang Lixin, head of the professional capabilities development department at the ministry, said they will continue to keep a close eye on the development of COVID-19 to prevent spread of the pandemic and make preparations for the event.

“We will coordinate with all other relevant departments to solve possible problems in areas such as visas, entry of personnel and goods and media invitations to ensure the competition runs as scheduled, including a meeting on technology preparation week in mid March and a testing competition in early April.” he said.

He said China would continue to promote the competition around the country. From November, activities including an exhibition of China’s achievements in previous WorldSkills competitions, and a competition flag relay will be organized throughout the Chinese mainland.

During the competition, a WorldSkills conference will be organized with “New Youth, New Skills, New Dreams – Sustainable Development for Skills” its theme. Zhang said participants will share their views on skills development and sustainable development, skills development and poverty relief, cooperation between schools and enterprises in vocational training and high-quality apprenticeships, transformation of WorldSkills standards and talent cultivation, and the influence of COVID-19 on vocational training.

Peng said Shanghai is determined to host "an innovative and influential” WorldSkills competition next year.

He said new technologies such as artificial intelligence and 5G will be used to operate the competition in a “green, smart, scientific and humane” way.

Four enterprises — Industrial and Commercial Bank of China, Bank of Communications, Shanghai Pudong Development Band and SAIC Motor — have been selected as national strategic sponsors for the competition and it is expected to attract more than 200 sponsors in total. 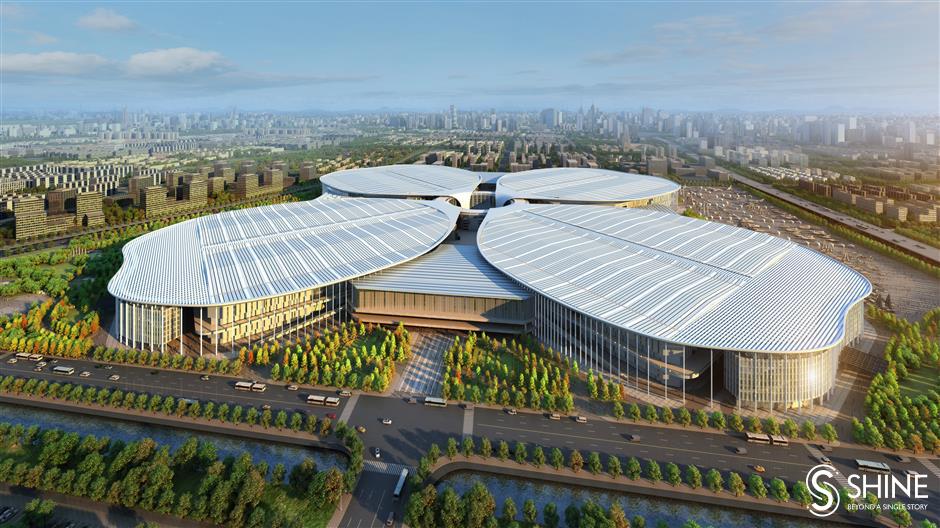 The National Convention and Exhibition Center (Shanghai) will host the 46th WorldSkills Competition next year.

Organizers plan to run the event in over 300,000 square meters of the National Convention and Exhibition Center (Shanghai).

Zhao said 220,000 square meters will be used to organize the competition and a skills expo while the remainder will provide services and support.

“An important part of the organizing work is to build up suitable spaces for contestants to compete in the competition,” he said. “It means we have to build up more than 60 'workshops' or 'plants' with full production capability and equipment of high quality and precision. To build these venues, we have drafted out nearly 20,000 kinds of materials and appliances needed for infrastructure. Each skill project will need about 300 kinds on average and the aircraft maintenance project will need more than 600. We estimate that we will use more than 450,000 items of materials and appliances in total, including equipment like aircraft engines and small tools.”

Peng said 64 schools in the city will showcase more than 70 skills during the competition, which is expected to attract an audience of about 600,000, and the city is also working out plans to assist vocational skills development in Africa.

Work is also underway to renovate the century-old Yong’an Warehouse in Yangpu District of Shanghai into the WorldSkills Museum.

Zhao Yongfeng, director of the Shanghai Human Recourses and Social Security Bureau and secretary general of the competition’s organizing committee, said the museum had received information about 4,000 exhibits and more than 400 had reached Shanghai and are being assessed by experts.

Zhao said the museum should be completed by the end of the year and exhibitions designed simultaneously. From January to August next year, designs will be modified accordingly and exhibits will be arranged, he said.