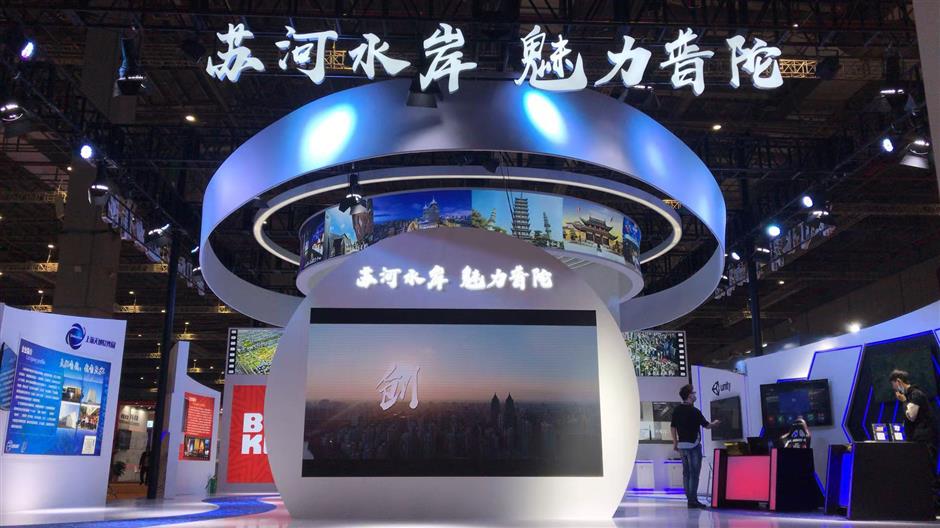 The prosperous cultural industries along the Suzhou Creek are featured at the 2020 Yangtze River Delta International Cultural Industries Expo which opened to the public in Shanghai on Thursday.

Putuo District, which has the longest downtown section of the creek at 14.3 kilometers, has a pavilion about the major riverside cultural parks, leading companies and government support for the cultural industries.

Shanghai’s two cultural innovation industry demonstration parks in Putuo, the Universal Software Park and the M50 art hub, are highlighted in the pavilion along with key companies based in the parks.

The software park, one of the city’s major innovation parks for computer and Internet firms, has over 2,400 companies with 1.63 billion yuan (US$247 million) in tax revenue in 2019, according to the exhibition. It aims to become a new base for the high-tech sectors in the Yangtze River Delta region with the pillar industries of big data and Internet plus, intelligent manufacturing and robotics, animation, cultural film and fintech.

The M50 hub at 50 Moganshan Road was developed from the former Chunming textile factory. One of the world’s top art hubs, M50 has 170 studios and galleries from over 20 nations and regions.

Apart from the parks, both along the creek, Putuo has also created an Internet film and TV industry cluster along Jinshajiang Road. Over 130 film and TV companies have established bases there, including Alibaba Pictures, Tao Piaopiao, Union Pictures and Suning Universal Media.

The district government has established a cultural development foundation which has supported 88 projects with a total investment of 80 million yuan between 2015 and 2020.

The expo, at the National Exhibition and Convention Center, has attracted more than 1,000 cultural and art institutions from the delta region, around the country and all over the world, a 13 percent increase on last year. The annual event will run through Sunday.