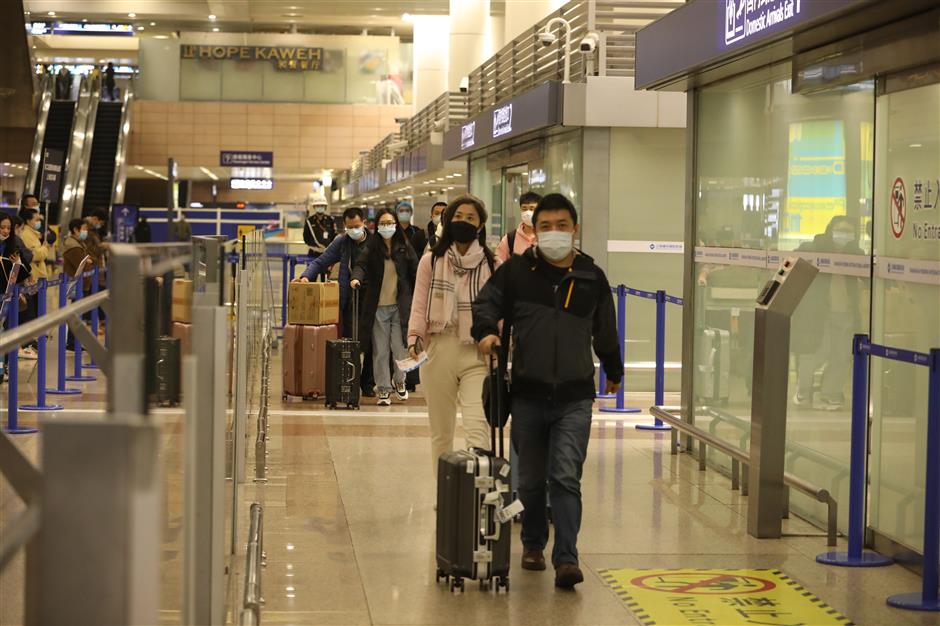 Arriving passengers at the Pudong airport's T1 terminal on Monday.

Intensified disinfection measures have been conducted on all freight from overseas at the cargo terminal of Pudong International Airport after seven new COVID-19 cases were connected to the site.

Trucks transporting the cargo will be disinfected before bags and packages inside will be further disinfected by mist sprayers.

The goods will then be held in a ventilated place for at least half an hour before being delivered, a China Post official said.

“The company has released a work safety guideline to all the portal hubs and service centers,” DHL said. “It includes the disinfection of imported aircraft containers, trucks and products as well as prevention measures for staff.”

The cargo terminal at Pudong airport was operating smoothly on Monday and staff wore masks and disposable gloves.

An official with Eastern Air Logistics said he had been tested along with other airport staff at the terminal around 11pm on Sunday and was working as usual. He said every porter had replacement gloves.

After freight arrives at the terminal, staff first spray the boxes with disinfectant and set them aside for 30 minutes before opening and delivering them to the warehouse, where they are disinfected again, he said. 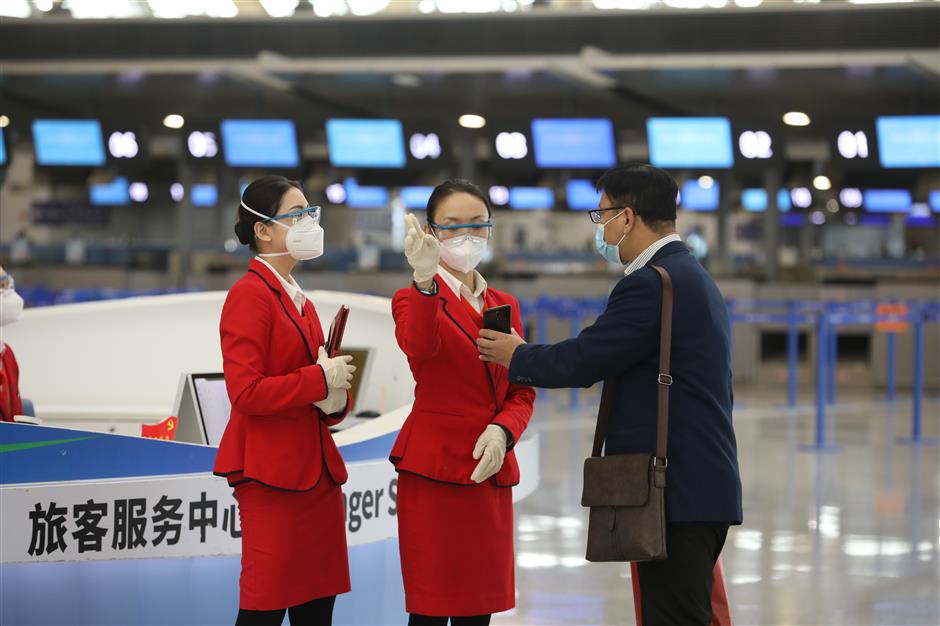 The Shanghai Center for Disease Control and Prevention said two recent cases of novel coronavirus in Shanghai and neighboring Anhui Province were both related to an aviation shipping container which arrived in Shanghai from North America late last month.

A 51-year-old male porter who was confirmed with the infection on November 9 had been inside the container to clean it on October 30 with a colleague who was confirmed as infected the next day in Anhui. They had not been wearing masks, according to the center.

Another porter at the West Cargo Terminal of UPS at Pudong has tested positive of COVID-19, while his wife, colleagues and their wives also later tested positive.

Wu Zunyou, chief epidemiologist at the Chinese Center for Disease Control and Prevention, said international cargo transported in cold weather can become a carrier for the transmission of novel coronavirus.

It stipulates that intensified disinfection and ventilation measures must be conducted for international mail and packages at frontier delivery hubs.

All staff must be registered and under strict management. They must be equipped with protective gear and receive safety training. Masks, gloves and temperature checks are required in the workplace.

Imported frozen food must be quarantined and disinfected. The packs cannot be opened during delivery. Transport vehicles and fridges must also be disinfected, according to the bureau.

“All the logistic companies, departments and staff must obey the rules, including international firms like UPS and domestic courier firms such as SF Express,” Chen said.

To ensure safety, people should disinfect packages from overseas while wearing masks and disposable gloves. The packs should be set aside for at least 30 minutes and the articles inside should also be disinfected, Chen said. 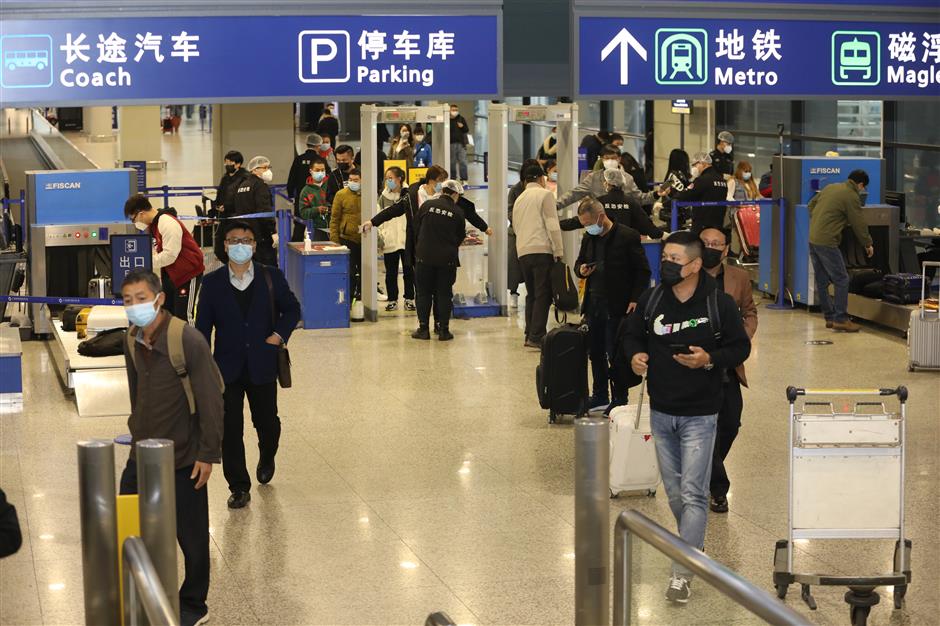 Travelers receive security and temperature checks before entering the T2 terminal at the Pudong airport.

Pudong airport was operating smoothly on Monday and only a few flights had been delayed or canceled.

Two buildings at the P4 garage where 17,719 staff have been tested since Sunday night, have been closed for disinfection.

Over 900 inbound and outbound flights were operating at Pudong on Monday, the same as the recent daily average.

The airport is handling about 100,000 arriving and departing travelers every day, including about 5,000 international passengers, according to the airport authority.

“The recent COVID-19 cases had nothing to do with the T1 and T2 terminals,” said Zhang Lei, the airport’s safety operation director.

All travelers are subject to two temperature checks after arriving at the terminal buildings. International arrivals must be tested and quarantined, while passengers arriving on domestic flights must show their health codes.

Restaurants and shops at both terminals are operating as normal. Customers are being reminded to maintain a social distance, while cleaners carry out frequent disinfection.

“The smooth operation of the airport makes me feel relaxed,” said a traveler surnamed Liu heading to Chengdu in southwest Sichuan Province. “As long as I make sure to protect myself, there is nothing to be worried about during the trip,” she said. 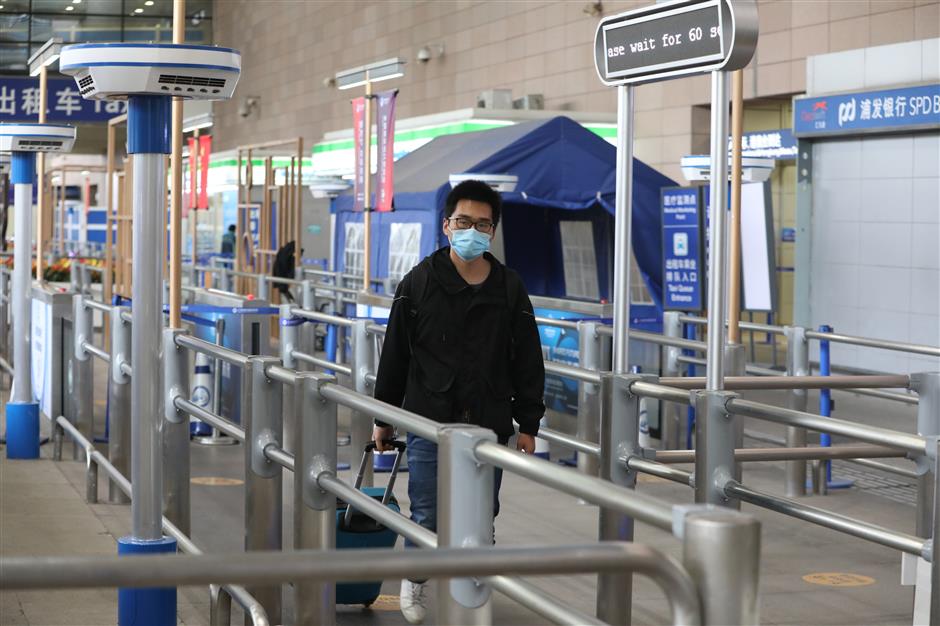 An arriving passenger enters the taxi waiting area at the Pudong airport.