Northern Shanghai’s Wusongkou cruise port's terminal building is being renovated, and employees are being trained to prepare for a gradual return to sailing in the wake of the COVID-19 pandemic.

Xu Hong, port operation director of the international cruise terminal in Baoshan District, said new walking routes for passengers have been redesigned to reduce social contact. The staff are receiving English training and equipment is being maintained.

“The terminal will embrace the day of its reopening with the best conditions and operations,” said Xu.

Xu, 50, has overseen the terminal's rapid development over the past decade, which has become the busiest in Asia. Once a single building, the terminal has been expanded into three, while the length of the port has doubled to 1,600 meters to allow four luxury liners to berth simultaneously.

The number of annual travelers has increased to 2.9 million from 23,000 when the terminal opened in 2011. Under Xu's leadership, the terminal has welcomed 2,200 cruise ships carrying more than 13 million passengers.

Xu, who previously worked at the Wusong Passenger Bus and Ferry Station, was awarded a national “model worker” for her dedication to the terminal's development.

A native of Qidong in neighboring Jiangsu Province, Xu came to work in Shanghai in 1989 and previously worked as a teacher at a elementary school, a farmer in Yanghang Town and a saleswoman at a shopping mall in Baoshan.

“No matter what job I do, I want to do it better than other people,” Xu said.

She was recruited as a conductor at the bus and ferry station in 2002 when the city’s ferry service to Chongming Island was moved to Wusongkou from Shiliupu in the downtown area. After the establishment of the cruise ship port, she became general manager of port operations. Xu Hong (left) chats with a colleague at the cruise ship terminal.

The initial phase of the terminal was designed to serve 600,000 passengers a year. As several liners from the world's top cruise ship companies — Carnival, Royal Caribbean, Norwegian, MSC and Genting — have made their maiden voyages in Asia from the Wusongkou terminal, it had to handle the rapid increase of travelers.

“Xu has led us to research, test and find the best management method,” said Cai Erbing, an official with the terminal.

She also communicates with customs and immigration authorities to optimize the terminal's operation, Cai said.

An innovative method to manage arriving passengers has been developed under Xu’s leadership. An information system is designed to stagger passengers disembarking from ships during busy periods, which has been promoted to cruise ship ports in Guangzhou and Shenzhen in south China’s Guangdong Province.

Since the novel coronavirus broke out earlier this year, the Wusongkou terminal has become a model for dock facilities deploying precautionary measures.

Xu worked at the terminal continuously for nearly a month in January to ensure smooth operations and prevention measures.

All cruise ships operating at the port have been shut down since January 30 to prevent the spread of the virus.

The terminal received the last eight luxury cruise ships between January 22 and 29, carrying 30,595 inbound and outbound passengers along with more than 10,000 crew members.

No COVID-19 infections have been reported on any of the ship due to efforts led by Xu and other officials. 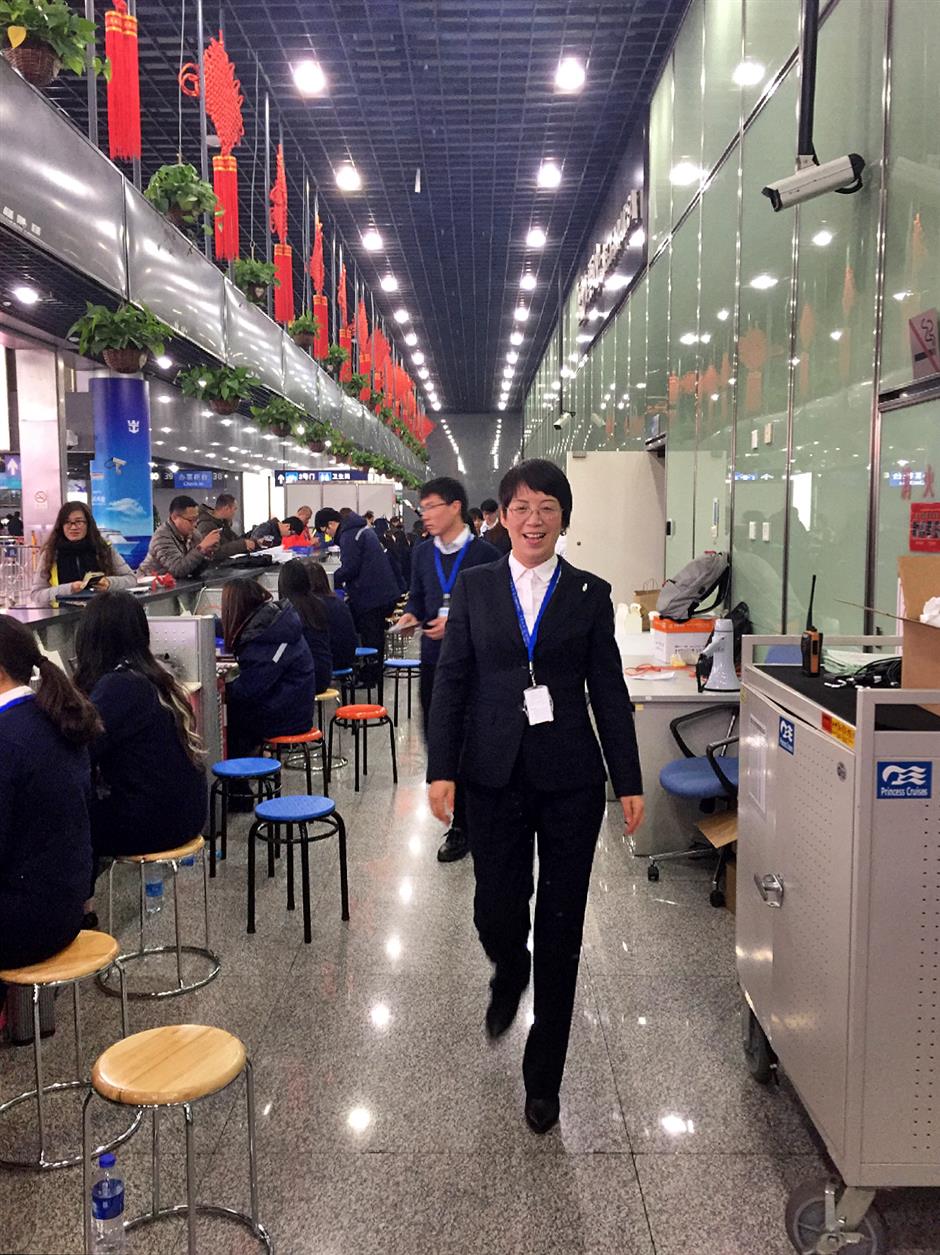 Xu Hong walks through the cruise ship port in Baoshan.