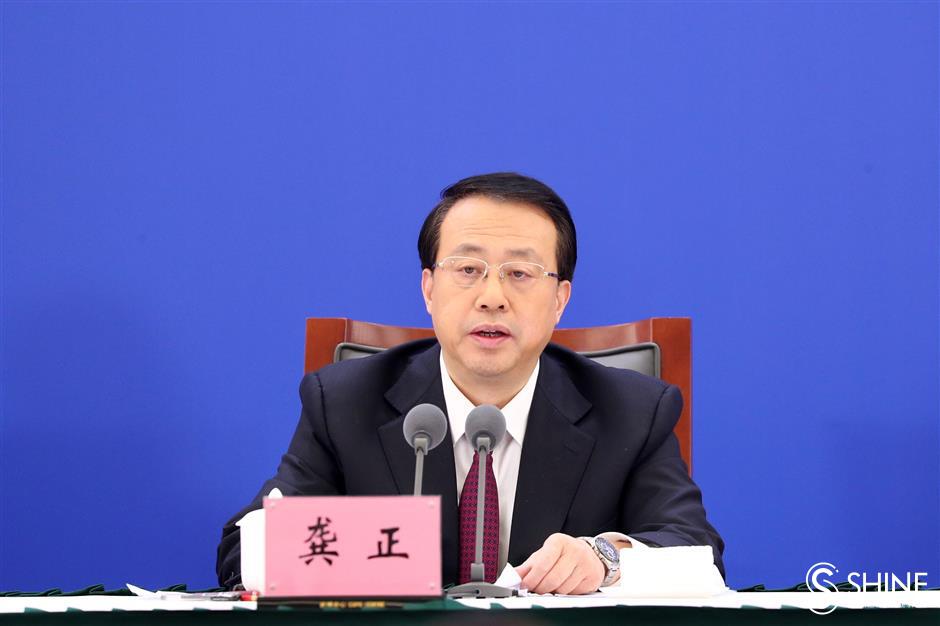 Mayor Gong Zheng speaks at a press conference after the closing of the fifth plenary session of the 15th Shanghai People’s Congress on Wednesday.

The development of five new towns will be a “strategic support for Shanghai’s future development,” Shanghai Mayor Gong Zheng said at a press conference after the closing of the fifth plenary session of the 15th Shanghai People’s Congress on Wednesday.

Shanghai aims to develop the new towns in Jiading, Qingpu, Songjiang, Fengxian and Nanhui as “independent and comprehensive node cities.”

“They will be different from ‘pendulum cities’ such as satellite cities and new towns in peripheral areas of a city, because they will have fully fledged functions,” Gong said.

The five new towns will be a driving force of development not only to the rest of Shanghai but also to cities in the Yangtze River Delta region, especially those neighboring Shanghai, he said.

Gong said the government will accelerate the introduction of a policy support system for the development of the new towns, the launch of major infrastructure and economic projects and the construction of public cultural and sports facilities for those new towns this year.

With regard to public services, Gong said the government will continue to focus on providing desirable living and working conditions for residents and “leave the best resources to the people.”

“We hope our residents can find more changes at their doorsteps and get more benefits from public services,” Gong said.

As for the further development of the riverside of Huangpu River and Suzhou Creek, Gong said more dining options including bistros and cafes and small sports facilities such as basketball and badminton courts will be found on the riverside this year.

Parts of the riverside, such as the North Bund and the area of the East China University of Political Science and Law, will be upgraded, and the historical buildings along the rivers will be further transformed into sights and destinations, with the construction of a park belt around the city accelerated.

The government will also continue to address the ecology and environment this year by striving for cleaner air, better water quality in rivers and lakes, achieving zero landfill of untreated domestic waste and enforcing the Yangtze River fishing ban.

Gong said the government is making plans to ensure the city reaches carbon emission reduction targets by 2025, five years ahead of the national goal.

The plans will include adjustments to the city’s industrial structure, furthering of the effective use of clean energy, increasing the carbon sink capacity of the ecological system and construction of a carbon credit trading system for the whole country for a “green social and economic development model,” Gong said.