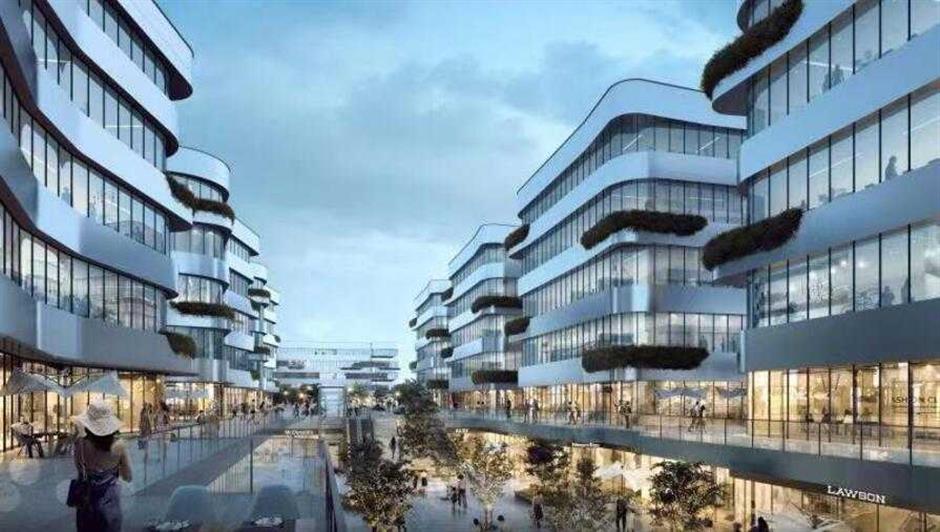 An artist rendition of the MAX scientific park

Several major biomedical industrial parks are rising from a more than 700-year-old ancient town in northern Baoshan District to transform the former iron and steel industry center into the "main front" of the city's global scientific innovation facility.

Construction started on the MAX scientific park in Luodian Town, which dates back to the Yuan Dynasty (1279-1368), on September 7 to attract multinational company headquarters in the field of biomedical research and development.

Nine leading biomedicine companies have signed cooperative agreements with the new park. An exhibition center at the North Shanghai Biomedicine Industry Park has also been unveiled.

The innovation park is expected to become a benchmark project for Baoshan to become the core site of Shanghai's scientific innovation facilities and a hotspot in northern Shanghai.

The district government has streamlined the approval process for the key project, according to the Baoshan government. The park's operator acquired the land on September 2, and the government provided all required certificates the next day.

With a total investment of 1.5 billion yuan (US$233 million), the MAX scientific park covers a total area of about 66,000 square meters, equivalent to about 10 standard football pitches. The park is scheduled to open in 2025 with a total output of 2.5 billion yuan and annual tax revenue of 200 million yuan.

The park will create about 8,000 jobs across around five top companies with an annual output of over 100 million yuan.

Luodian has attracted a swath of innovation parks, mainly in the biomedical industry. Many leading enterprises are based in the historic town.

The North Shanghai Biomedical Industrial Park, for instance, has also been established in the town to become an industrial landmark of the Yangtze River Delta region.

Despite the COVID-19 pandemic, leading companies from both home and abroad, including Shanghai Pharma, Baoji, Guosheng, Thalys, and DiaSorin, have signed agreements to develop facilities in the park with a total investment of more than 10 billion yuan this year.

"Biomedicine, a prioritized, strategic industry for countries around the world, will become a key pillar industry in Baoshan to serve Shanghai's plan to build a global scientific innovation center," said Chen Jie, the Party Secretary of Baoshan.

Top experts including Chen Kaixian from the Chinese Academy of Social Sciences were appointed as members of an expert panel to guide the park's development.

The biomedical branch of the Shanghai Overseas Returned Scholars Association also established a center in the park for academic and talent exchange.

As one of the new projects, Shanghai Pharma's Baoshan giga-factory, with a total investment of 5 billion yuan, will cover 530,000 square meters.

Luodian was once the biggest marketplace in the area, known as "Golden Luodian," but the "golden" tag gradually faded in the face of urban development.

To restore its historical glory, the township government has been transforming its traditional industrial parks.

Another key project, the MEDIPARK, developed by Guosheng Industrial Transformation Capital, is scheduled to open in September 2022.

The park will cover 130,000 square meters and house about 100 biomedical companies, with a total annual tax revenue of over 100 million yuan. The annual production value will be more than a billion yuan. About 1,000 people are expected to work on the site.

Company headquarters, research and development centers, production lines and other industrial chains will be based in the park, according to the district government.

Leading biomedical firms such as Jingze Biotech, Merck, Covance and Laekna have signed cooperative agreements with the park.

Guosheng capital has created a special 500-million-yuan foundation to support companies' R&D and rapid growth, as well as the park's construction and investment promotion.

More than 30 supportive measures for biomedical enterprises have been established to offer multi-stage support. A special service team will offer tailored services from registration to approval, construction and operation.

The district released a three-year action plan early this year, marking a new round of redevelopment for the former industrial center that will fulfill the city's ambition to become a science and innovation hub with global influence.

According to the plan, between 2021 and 2023, Baoshan will develop three major industrial parks centered around biomedicine, science and technology, and robotics.

The Wusong area, known as the cradle of China's modern industrial base, is being transformed into the Wusong Smart City, an area with new material and hardware industries, scientific and cultural innovation parks, commerce and business facilities, residential communities and waterfront attractions.

The area was home to the renowned Baosteel Group and more than 300 other metal refineries and chemical engineering plants dating back to the 1930s. Most of the factories have shut down or been relocated due to pollution problems.