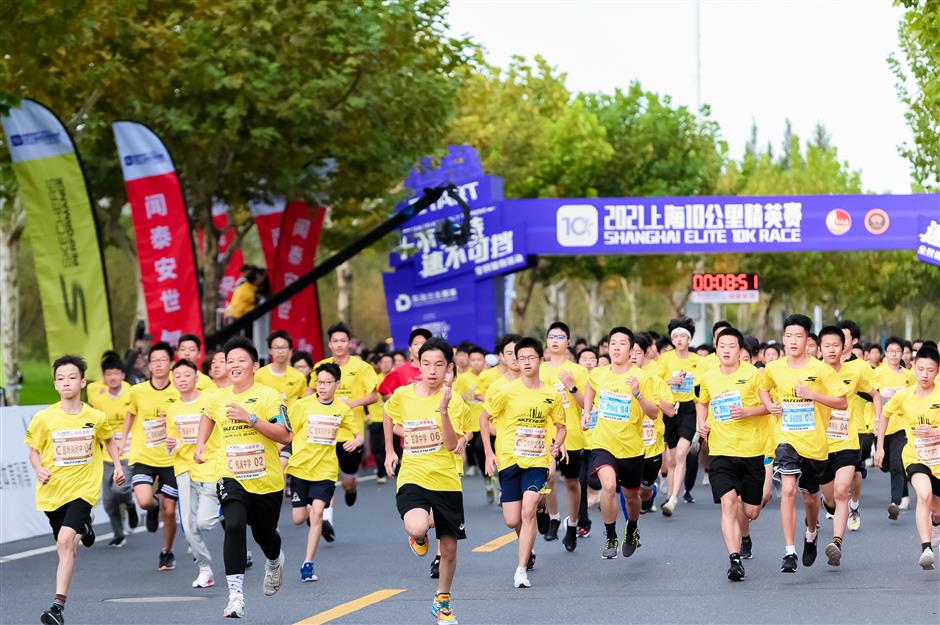 The 2021 Shanghai Elite 10K Race was held in Putuo District early on the morning of October 17, with 5,500 runners racing along the most zigzag section of Suzhou Creek in Shanghai.

Runners were divided into three groups to start the race in staggered times to avoid crowding, one of the key COVID-19 prevention measures.

The route went past Zhenbei Road and Changfeng Park before reaching the finishing line at the intersection of Tongpu Road and Zhongjiang Road. It passed the district's key natural and industrial projects along the creek.

The aim of the event was to promote running activity and enrich Putuo and Shanghai with vitality, according to the organizer. It also had an eye on promoting tourism, the district's urban image, its renewal campaign and enhancing its influence.

The Shanghai Elite 10K Race has been listed as one of the top running events in Shanghai along with the Shanghai International Marathon and Half Marathon.

Chen Yujin was the first male runner to complete the 10km race, clocking 31 minutes and 5 seconds. The women's crown went to Zhang Xinyan, a national athletics team member, who completed the distance in 32 minutes and 57 seconds. Over 99 percent of runners finished race within an hour and a half.

COVID-19 prevention was a paramount task of the organizer. Last year, over 3,000 runners participated in the 10km race, which was initiated in 2015.

Four medical stations and six ambulances, as well as about 100 emergency volunteers, were arranged along the route to ensure runners' safety.

The coaches, frontline volunteers and medical staff needed to do nucleic acid tests before the event. All racers had to report their health condition and itinerary two weeks before the race.

People from China's medium and high risk regions were denied admission to the race and their registration fees were refunded. Runners needed to do daily self-health observations for two weeks before the event and report their temperatures on the official app of Shanghai International Marathon. Intending participants with abnormal temperatures were asked to quit the race.

The ultimate participants had to sign a health promise, provide nucleic acid test reports within five days and display their health code.

Integrated facial recognition, temperature check and health code scanning machines were installed at the race's starting point. Runners had to wear masks and keep safe social distance from others before the race began.

Drinking and supply sites were set up every 2 kilometers.

A number of roads in Putuo were also closed for the race. From 7am to 10am, parts of Zhenbei Road, Danba Road, Guangfu Road W., Yunling Road E. and others were fully or partly closed to traffic. 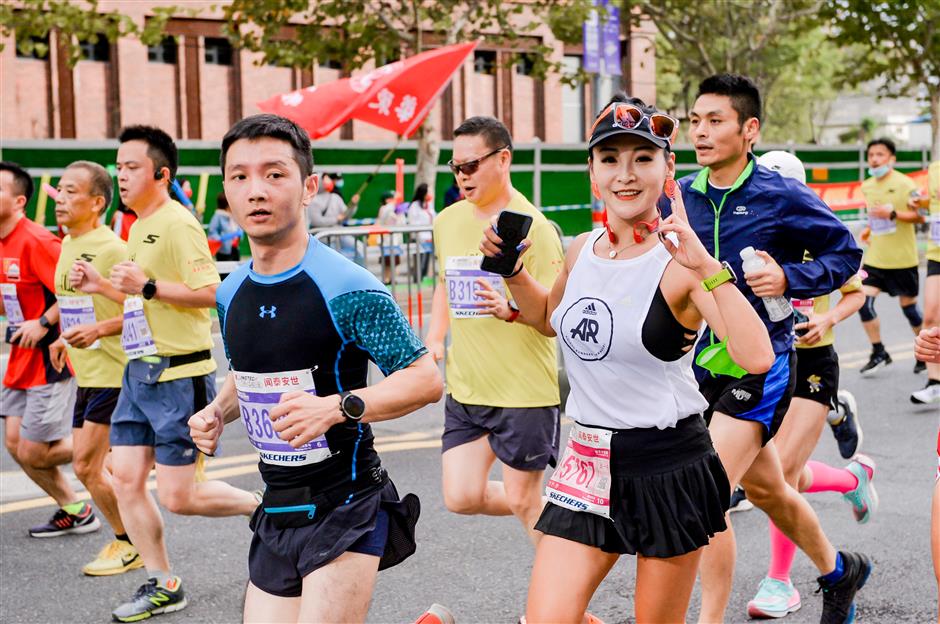 Runners in action and posing for photos along the route in Putuo.

As a highlight along the route, contestants raced through the stunning backdrop of Changfeng Ecological Business Hub and then along Suzhou Creek.

The waterfront area is surrounded by over 50 percent of greenery, ecological landscapes and a pleasant living environment.

The area once housed Shanghai Chemical Reagent Co, one of China's homegrown industries. A 70-meter chimney from the factory has been preserved and served as a landmark at the finish line.

Runners also had the chance to see other industrial relics along the race route, including former factories for matchboxes, the Jackie Chan Film Gallery and the exhibition hall of Suzhou Creek's industrial past.

As the creek passes through Putuo, it flows through the history of Shanghai's growth into an industrial city, according to Putuo culture and tourism bureau. Waterfront redevelopment preserves that heritage.

A world-class urban life and recreation zone is being developed along Suzhou Creek in Putuo, said Zhou Hanyan, the bureau's director.

Beginning in the first decade of the 20th century, Chinese entrepreneurs built national industries, including textiles, flour, beer, minting and printing, along the most zigzagged section of the creek, known as the "18 bays."

Many of the former factory areas have been preserved by converting them for modern use, including the now popular M50 art hub, which opened in 2000, and the two-year-old X Tower specialty park.

Walls and fences in parks and residential neighborhoods have been removed to allow convenient public access to the entire 125 kilometers of the waterfront, providing a continuous walkway from Qingpu District to the creek's confluence with Huangpu River downtown.

The Putuo government launched a redevelopment of the waterfront in October 2018. Weedy, deserted backyards and illegal structures were first targets of the project.

The structures were demolished and the empty spaces were creatively filled with the likes of pocket parks and hubs for cultural industries. A former muddy waterfront path has been paved with synthetic tracks.

The riverside walkway in Putuo was once interrupted by 14 neighborhoods. Residents were mostly concerned about the safety of their communities and maintenance of the paths.

The route of the race this year was well designed to showcase the newly refurbished riverside attractions along the creek, according to organizers. 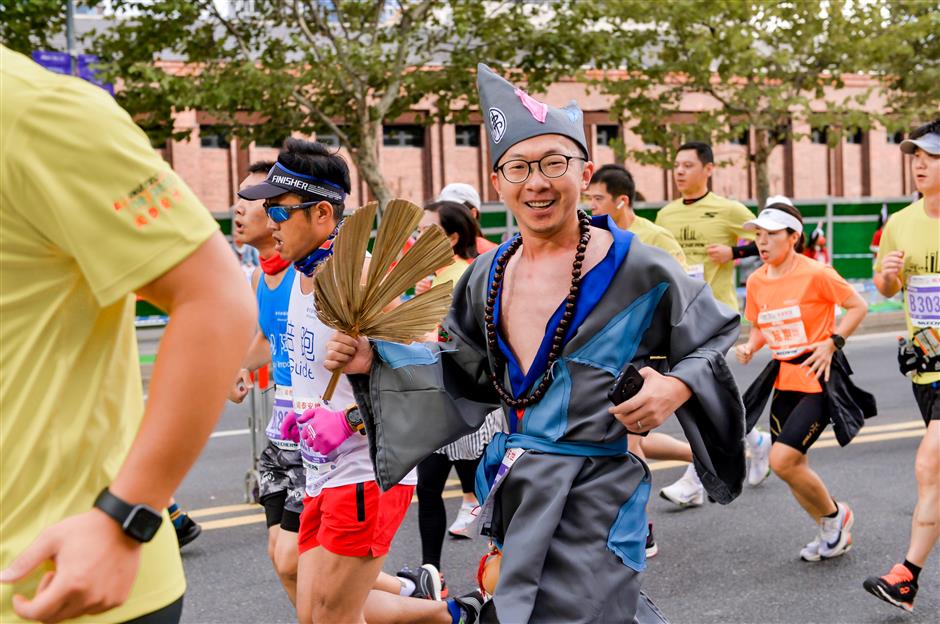 Changfeng Park, for instance, features a large vista of white magnolia flowers, a large lake and several other eye-catching facilities, including an aquarium and boating on the lake.

Changfeng Ocean World, also known as Sea Life Shanghai, is a main attraction at the park. It opened in 1999 with an area of 10,000 square meters. It showcases more than 10,000 marine creatures of over 300 different varieties.

A new aquarium for ray fish was launched with species from across the world and including those in popular children's TV series "The Octonauts."

The Ray Bay aquarium was the former beluga whale pavilion. The original inhabitants, two beluga whales, Little Grey and Little White, have been delivered to the world's only open water sanctuary for beluga whales in Iceland.

The ray pavilion has about 90 rays of seven species, such as cow-nosed and swallow-tail rays, along with nearly 600 other ocean creatures. Visitors can see baby rays and learn about the living habits of the various species.

The Suzhou Creek Industrial Civilization Museum, another cultural attraction on Guangfu Road W., celebrates the former glories of the riverside region where early national industry was concentrated. In its heyday, there were more than 1,900 companies in what was known as the Huxi industrial district.

The museum on 2689 Guangfu Road W. was converted from the former site of Shanghai Glasses Factory in Changfeng Ecological Business District. The museum has both indoor and outdoor displays showcasing artifacts and historical archives.

Some large machines dating back to early last century are being exhibited outside the museum. Fufengli, a former workers neighborhood in the late Qing Dynasty (1644-1911), has been restored to showcase the working and living environment of China's earliest working class.

The Fufengli Residential Ward door, at the entrance to the exhibition hall, was recreated according to that from the residential dormitory for the workers, built by the first Chinese flour mill. The two wood boards hanging on the door are originals.

The new Shanghai Children's Library is being developed inside a new urban park on Daduhe Road along the creek. The new library, featuring a "floating pavilion" with a rooftop garden, will become a center to promote information, knowledge, reading and cultural heritage for children aged between 4 and 16.

China's first eSports-themed shopping complex has opened in Changfeng area, geared primarily toward people between the ages of 12 and 30.

The ESP eSports Experiencing Center in Changfeng business district along the creek features a professional eSports arena, as well as animation, movies and virtual reality games. The East China post season games of the King Pro League are held there. 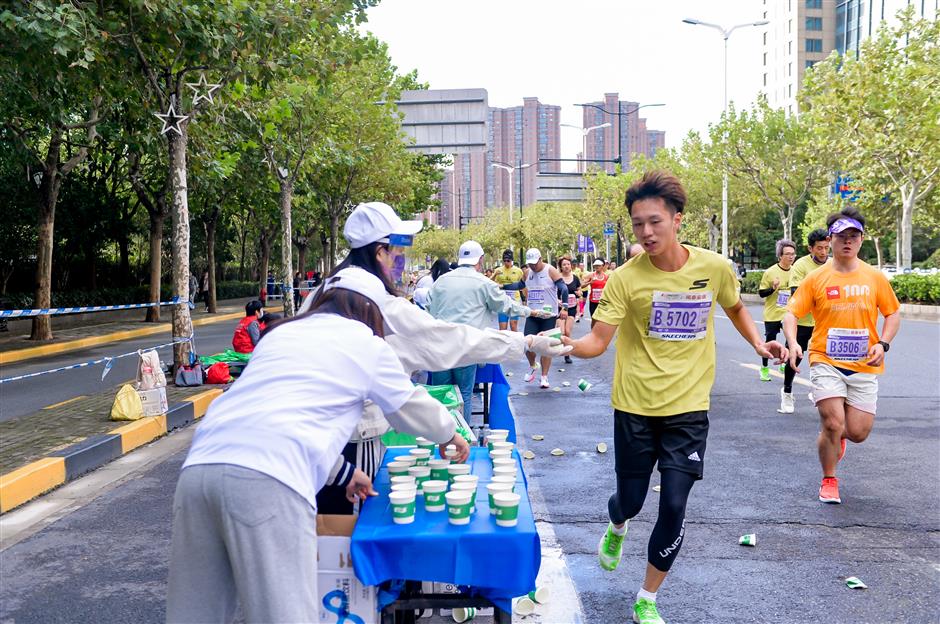 Several refreshment supply spots were set up along the running route.

To inspire more elite runners to participate, the organizers upgraded the awards to winners. The first six contestants won prizes ranging from 1,000 yuan (US$156.4) to 100,000 yuan. All those finishing the race were eligible for a medal.

Digital technology was widely used. Runners no longer needed to scan their ID cards as in previous years but their digital facial information was collected ahead of the race.

Each participant also was issued a QR code for staff members to monitor their running progress and physical condition.

Audiences were encouraged to watch the event through the livestreaming platforms of the city's sports channel or Sina.com. The video coverage also showed images of Putuo to more online viewers.

During Shanghai's first culture and tourism festival along Suzhou Creek in Putuo, which wrapped up on October 18, over 15 million visitors and online viewers were attracted.

Apart from the race, Putuo also hosts an international dragon boat race on the creek every year. The district government aims to make the banks of Suzhou Creek into the best place for citizens to visit, relax and take part in sports within five years.

Fifty-three professional and amateur teams raced on 200 and 500-meter sections of the creek this year for the China Dragon Boat Open 2021 and 18th Shanghai Suzhou Creek Dragon Boat Invitation Tournament. The contestants competed along a downtown section of the creek in Putuo, known as the "Crown of the Suzhou Creek." Six women's teams took part for the first time.

Putuo has also made eSports one of its key industries, helping serve the city's ambition to become a global eSports capital, according to the district's culture and tourism bureau. It is home to more than 20 eSports companies.

Several key eSports venues have been developed in downtown Putuo, such as the IMBA eSports center at Global Harbor Mall, the biggest downtown shopping mall, and an eSports Internet bar at Huxi Worker's Cultural Palace. 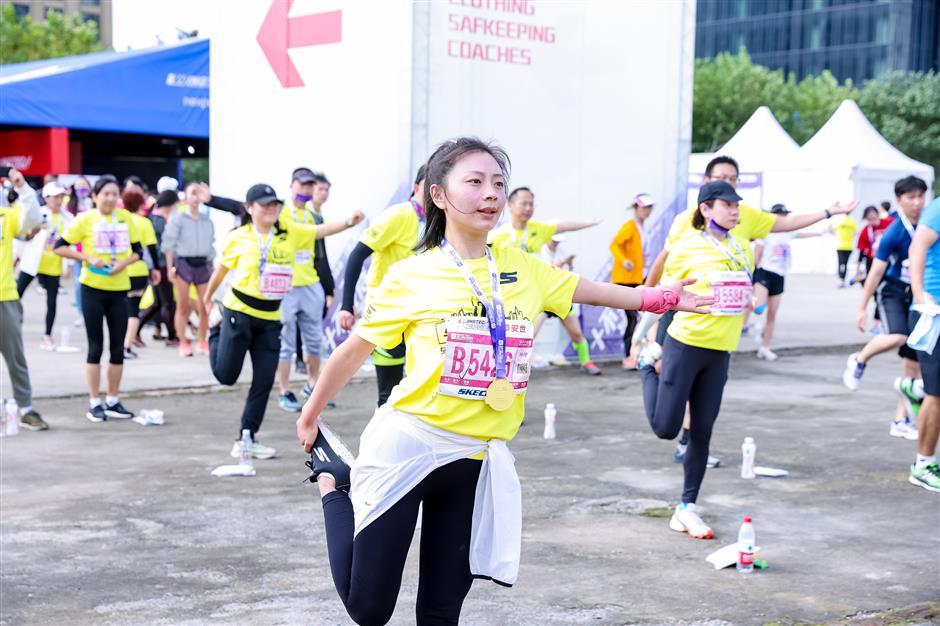 Runners were encouraged to stretch and relax after the race.