The man, a staffer handling import business at the cargo area of the Pudong airport, developed fever and drove to Fengcheng Hospital on Sunday, Wu Jinglei, head of the Shanghai Health Commission, told a press briefing on Monday.

His nucleic acid test result, as shown at the hospital, was abnormal and he was confirmed as positive on Monday.

The Group 8 area of Xingfu Village has been designated as a medium-risk area. 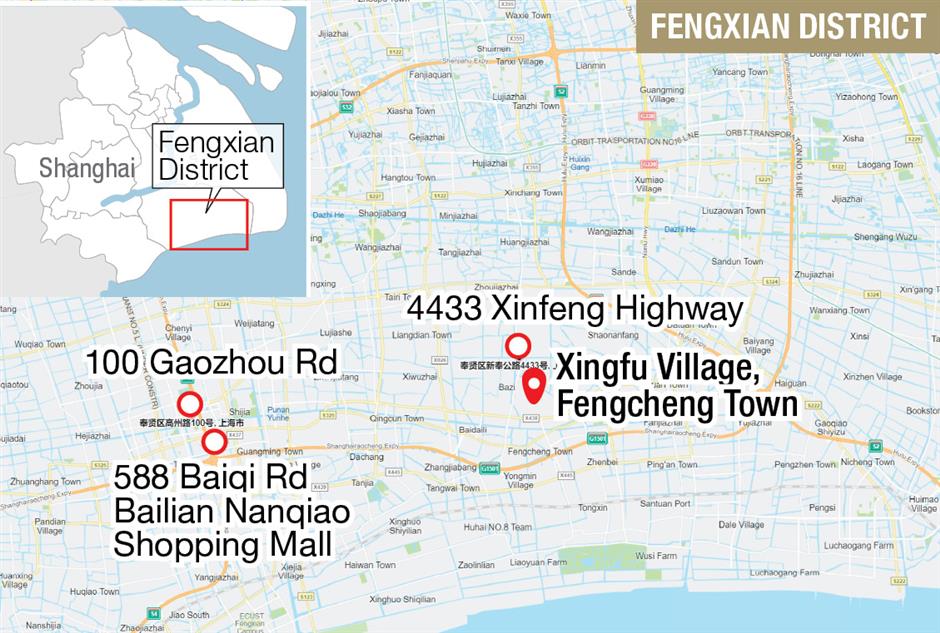 The remaining four areas that the man visited, such as the Bailian Nanqiao Shopping Mall and a tire repair shop on Xinfeng Highway, have been thoroughly disinfected, Wu revealed.

He has been sent to the Shanghai Public Health Clinical Center for treatment and is in stable condition, according to Wu.

The man's 96 close contacts in Shanghai have been in quarantine and all have tested negative.

Another 189 people who have had close links with these close contacts have been quarantined as well and none of their nucleic acid test results has returned positive so far.

Health authorities have screened 6,279 people relevant with these contacts, and the test results of 6,086 are negative with tests for the rest under way.

A total of 488 environmental samples have been collected and have tested negative.

The man's COVID-19 symptoms are light and he has been fully vaccinated, according to Wu.

He has also undergone regular nucleic acid tests twice a week, with the latest conducted on January 20, which was negative.

The airport is operating normally though it will tighten management following the locally transmitted COVID-19 case, it was revealed at the press conference.

"We will tighten the whole-process closed-loop management on human, cargo and environment at the airport," said Zhao Haibo, vice president of the Shanghai Airport Authority.

"The closed-loop management on inbound flights will be strengthened, and measures to stamp out imported cold-chain hazards will be beefed up," she added.

Strict prevention measures for airport staff as well as provisions for their nucleic acid tests and vaccination are in place, said Zhao.

People should avoid unnecessary trips outside Shanghai, and gatherings should be reduced during the upcoming Spring Festival holiday, according to Wu.

Medical institutions and schools have been ordered to enhance the screening of health QR codes of staff and students.

Staff and students who leave Shanghai should conduct a nucleic acid test within 48 hours upon arriving in the city and undertake seven-day health monitoring, said Wu.

Public transport venues such as airports, railway and bus stations and ports, as well as shopping malls, supermarkets, hotels, catering spots and cinemas should ensure temperature and health QR code check of visitors or those returning to the city and increase the disinfection frequency of public areas, particularly elevators and handles of doors which are frequently used or touched, to eliminate hazards, Wu urged.

People who visit or return to the city from or pass through high-risk areas or wholly sealed-off areas announced by local governments will be put under 14-day quarantine for medical observation and four nucleic acid tests will be conducted during the quarantine period.

Those visiting or returning to the city from or passing through domestic medium-level risk areas will have to undergo 14-day health management at communities with two nucleic acid tests conducted.

All overseas travelers to Shanghai are subject to 14 days of central quarantine and another week of self health monitoring.

After completion of the 14-day quarantine, inbound people will have to undergo seven-day self-health monitoring at home. Such people and their cohabitants should avoid unnecessary outings during the seven days.

"If trips are for medical purpose, special vehicles will be arranged to achieve a 'closed-loop' transportation," Zeng Qun, deputy director of Shanghai Civil Affairs Bureau, revealed.

Moreover, hotels – for seven-day health monitoring – will be arranged for those who don't have residences in the city or are passing through after their 14-day quarantine ends.

"People are not allowed to leave their rooms during this period, as food and delivery will be available at the hotel. If they have to go out for health reasons, special vehicles will be arranged," Zeng added.

For both situations, two nucleic acid tests will be conducted during the seven-day period.

The updated measures are effective between Tuesday and March 31, with flexible adjustments based on COVID-19 prevention situation.