Residents asked to stay in their communities even after lockdown lifted 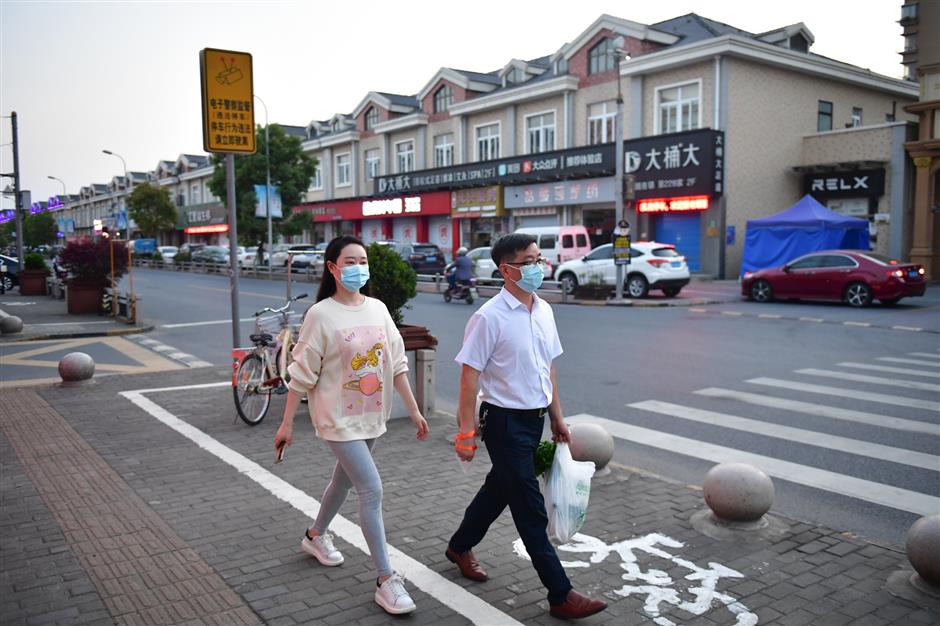 People out for a walk after lockdown was lifted on the first group of precautionary areas.

Residents in Shanghai's precautionary areas, where no positive case has been reported in the previous two weeks, are asked to limit their movements within their communities and take antigen tests twice a week.

The first batch of 7,565 communities, companies and sites have been listed as precautionary areas where the lockdown was lifted on Tuesday. However, residents of these areas should remain vigilant.

"Precautionary areas are not 'free zones,' because any large gatherings would present great safety risks," said Wu Qianyu, an official with the Shanghai Health Commission. "Strengthened social management and strict bans on gatherings will be imposed on these precautionary areas."

People should refrain from leaving their homes unless it is absolutely necessary, and their movements should be mainly confined to their compound. They are not allowed to travel outside their subdistricts and towns, let alone locked-down or controlled areas, Wu said at the city's daily COVID-19 press briefing on Tuesday.

If there are many risky areas neighboring precautionary regions, local districts can step up management and control measures, she added. 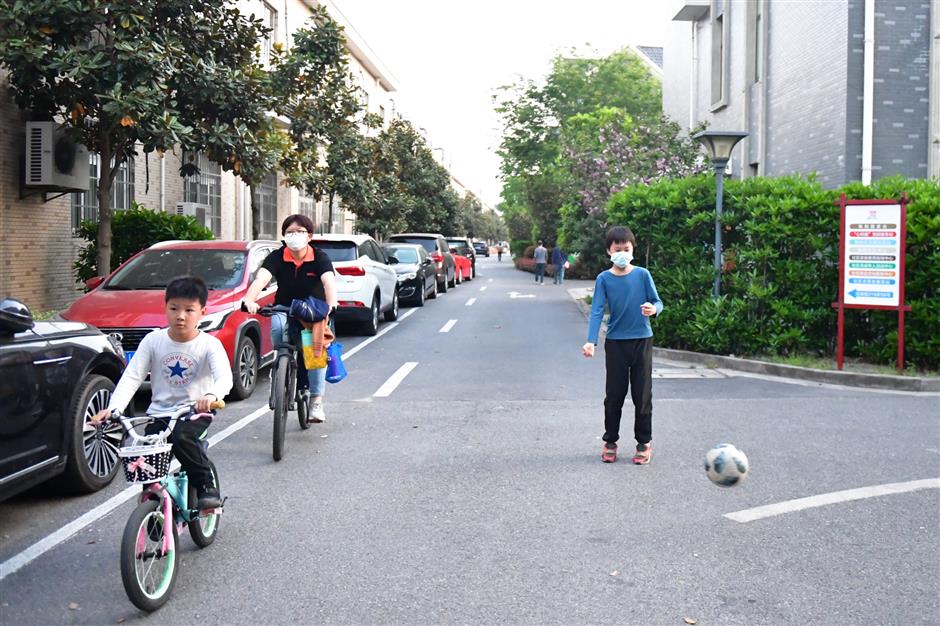 Children play in their residential compound in the first batch of precautionary areas.

If a positive case is detected, precautionary areas will be downgraded to locked-down areas, where a seven-day lockdown will be implemented and residents are required to stay at home.

Wu acknowledged that people have endured many difficulties and inconveniences in the arduous fight against COVID-19.

"Just hang on for a while and be patient. It won't be long before we're all free again," she said.

As the number of local positive cases continues to increase, more seniors with underlying diseases and a higher risk of severe symptoms are testing positive, according to Wu. She beckoned eligible unvaccinated seniors to get vaccinated as soon as possible. 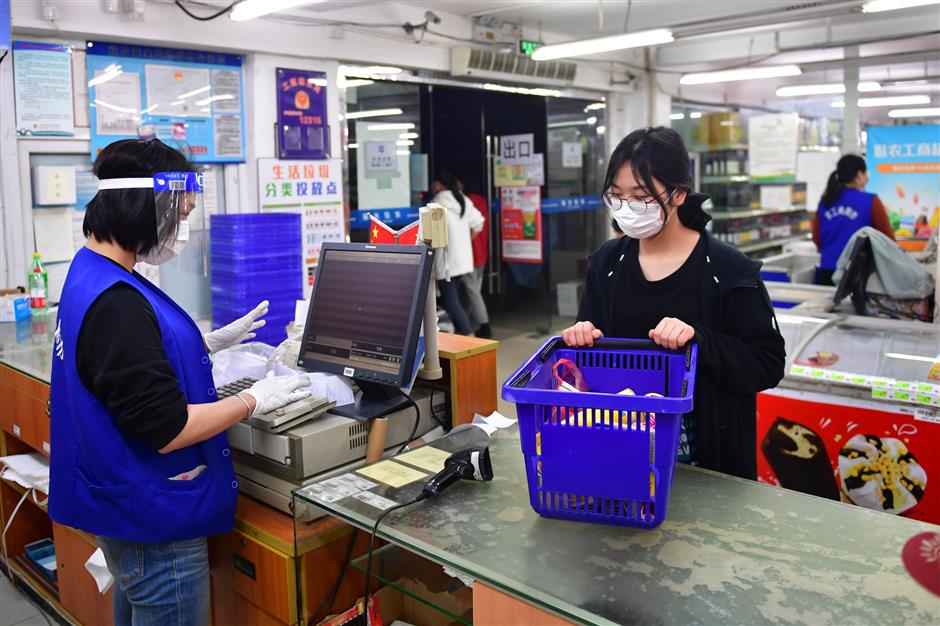 People shop at a convenient store that has reopened in a precautionary area.

Meanwhile, 6,000 COVID-19 patients were discharged from local designated and makeshift hospitals on Monday. They will return to their homes and be under medical observation for a week.

More than 20,000 previously infected people have been discharged from hospitals since March 1, according to the health commission.

More supermarkets, convenient stores and drugstores in locked-down and controlled areas will be allowed to reopen, said Liu Min, director of the Shanghai Commerce Commission.

Businesses that report zero positive COVID-19 cases can apply to the district's commerce authority to have their lockdowns lifted.

Some chain restaurants will also gradually reopen, but only take online orders. 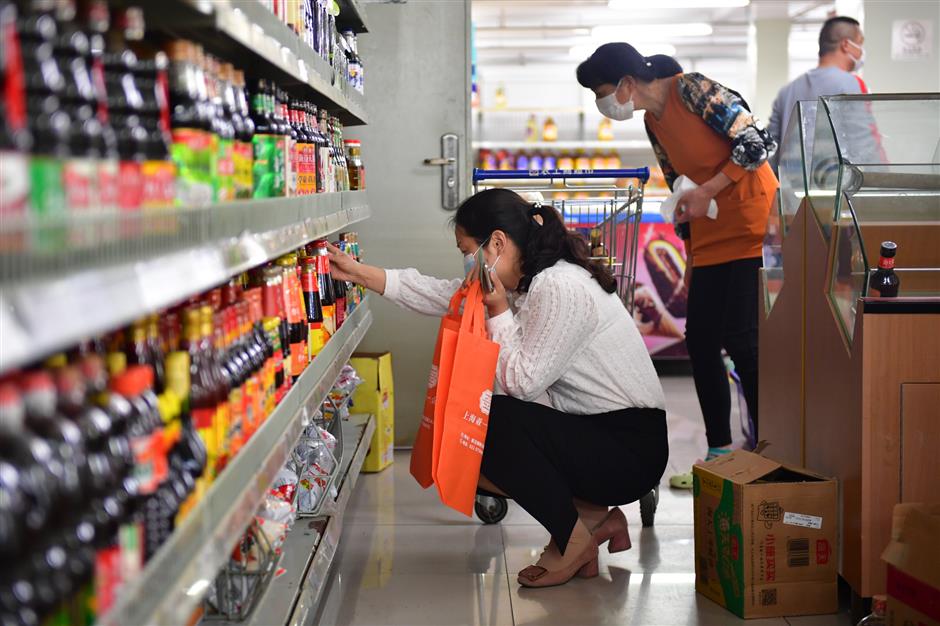 Citizens shop at a convenient store that has stored operation at a precautionary area.

﻿
Special Reports
﻿
61922
,
61924
,
Residents asked to stay in their communities even after lockdown lifted
Local hospitals tag team to save life of newborn
International facilities helping out during lockdown
French gas supplier donates supplies in COVID-19 fight
COVID-19 in Shanghai: 994 confirmed cases, 22,348 local asymptomatic infections
Jing'an complex among first to come out of lockdown
Heat continues on Tuesday, but much cooler from Wednesday
Hongqiao Railway Station closes all but one entrance
Pudong business heavily fined for price gouging
Lockdown to be lifted on more than 7,000 Shanghai communities and sites
EXPLORE SHINE