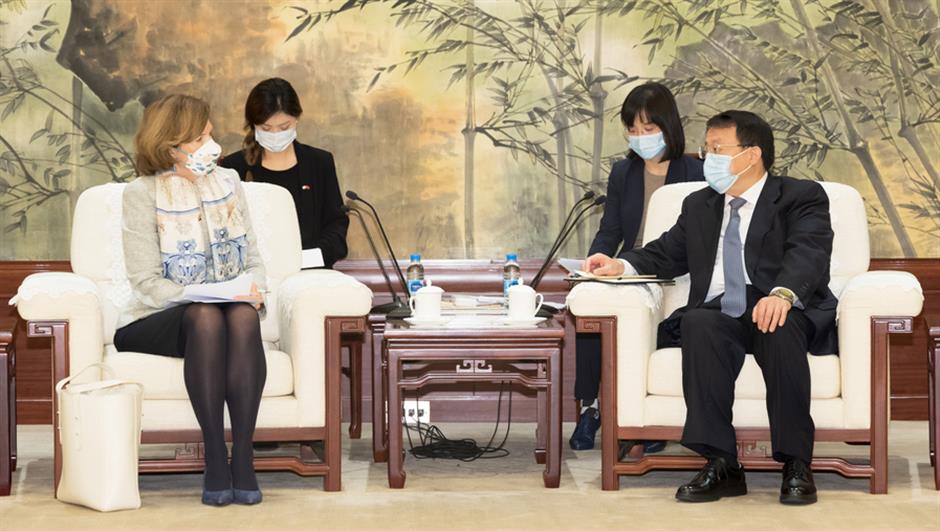 Wilson expressed condolences on the passing away of former Chinese President Jiang Zemin.

"Shanghai continues to be an attractive destination for foreign investment as it effectively contends against the COVID-19 pandemic while balancing its social and economic development," said Gong.

"The city is developing itself into a world influential socialist modern metropolis to meet the strategic expectations President Xi Jinping has placed on it," he added.

This year marks the 50th anniversary of the establishment of China-UK diplomatic relations at the ambassadorial level.

"We'll deepen our cooperation with the United Kingdom in the fields of finance, smart city construction, comprehensive traffic development, art and sports, through opportunities like the China International Import Expo and sister cities bond, as well as promote friendship between our peoples," Gong noted.

Wilson praised Shanghai as a key link in China-UK exchanges; not only has the city been twinned with multiple cities in the UK, its people are engaged in close exchanges on culture, business and finance with their British counterparts.

Wilson expects deepening cooperation with Shanghai and the city will play a more significant role in global trading and cultural and humanity exchanges.