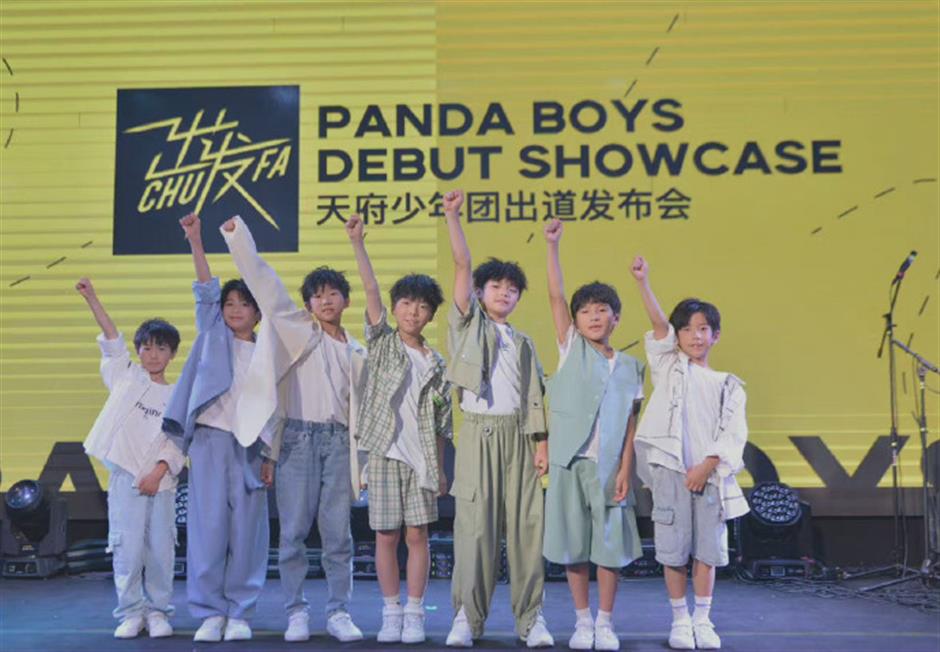 Panda Boys pose during their showcase on August 20 in Chengdu, Sichuan Province.

An idol group of seven boys with an average age of 8 has been dissolved due to unrelenting public criticism, only four days after they made their debut on the night of August 20.

The band, called Panda Boys, held an offline press conference in Chengdu, capital of southwest Sichuan Province, and released a single. The eldest member is 11 years old, while the youngest is only 7.

Netizens questioned their management company's role in depriving the boys of their childhood and using them as a tool to make money.

Many thought it was better for these kids to return to school instead of being idols.

Under a Weibo posting on China Central Television, a netizen said singing and dancing could be the kids' extracurricular interests, not a career, while another said the real idol for children should be groups like scientists and athletes.

In response, the company Asia Starry Sky Group announced it had no capital behind the group and said they just wanted to do a meaningful thing with a group of kids who liked singing and dancing.

According to Sichuan-based media The Cover, before the group was dissolved, a man surnamed Sun, who is in charge of the management company, said it never did any business activity with the kids.

"We hoped to promote Chengdu's local culture with the kids," Sun said. "because later we will organize a series of events promoting regional and traditional cultures."

Sun said every parent wants their kid to take an interest class, such as singing, dancing and instruments. And they provide a more professional platform for them.

The company hadn't taken any money from the parents, he added.

The mother of one of the boys told The Cover that, prior to the group's formation, her son kept practicing sports but once she found he had a talent for music she applied to this project for him.

She emphasized that all the training was done after school and didn't affect her son's study. A few months later, the parents did see some positive changes in the boy. "He made obvious progress in study, skill learning and getting along with others."

The phenomenon of creating young idol groups is not limited to China. Earlier in 1997, Japan's famous girl group Morning Musume was formed when three of the five members were aged 16 or younger.

Another girl group, Berryz Kobo, was founded in 2004 with the average age of the eight members being only 10.75 years. All were initially selected during the audition for "Hello! Project Kids," a musical collective project for girls under 12, in 2002.

The pupil idol group, SororBabys, formed in 2016, consisted of five girls aged between 8 and 12, and performed in a sexy style.

Liu Chunquan, a lawyer in Shanghai, told Shanghai Daily that under the Law on the Protection of Minors, schools and kindergartens should not arrange for minors to participate in business activities.