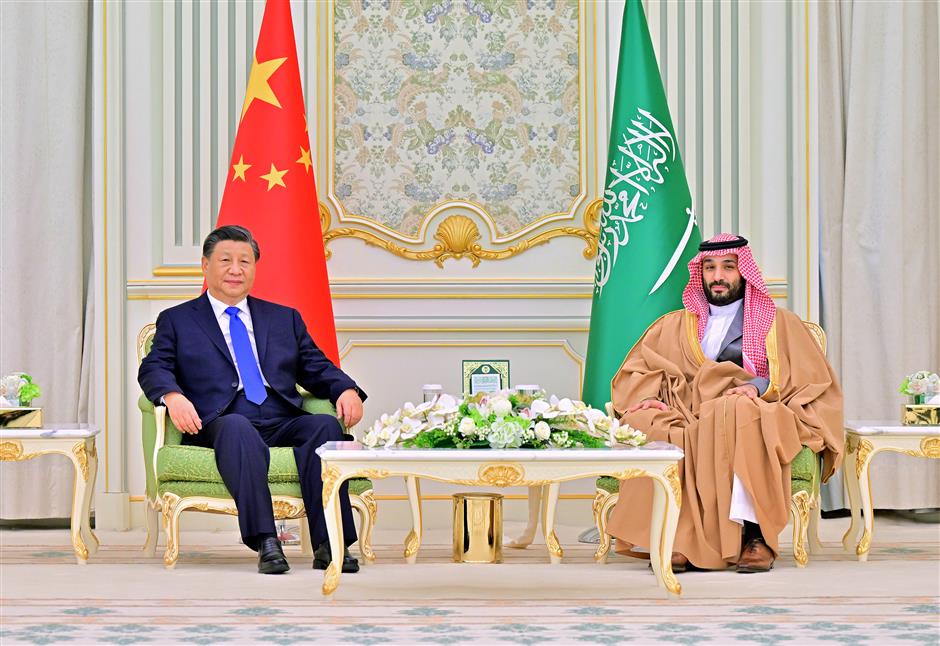 On behalf of King Salman bin Abdulaziz Al Saud, Saudi Crown Prince and Prime Minister Mohammed bin Salman Al Saud extended a warm welcome to Xi, and expressed sincere congratulations on the success of the 20th National Congress of the Communist Party of China (CPC) and on Xi's re-election as general secretary of the CPC Central Committee.

During their talks, Xi told the Saudi crown prince that Saudi Arabia is an important member of the Arab and Islamic world. It is also a key and independent force in the multipolar world and China's important strategic partner in the Middle East.

China takes the development of its relations with Saudi Arabia as a priority in its overall foreign relations, in particular its diplomacy in the Middle East. China will work with Saudi Arabia to achieve each other's national rejuvenation, forge stronger synergy between development initiatives, deepen practical cooperation in all areas, increase communication and coordination in international and regional affairs, and achieve even greater progress in the China-Saudi Arabia comprehensive strategic partnership, the Chinese president said.

The two sides need to earnestly synergize China's Belt and Road Initiative and Saudi Arabia's Vision 2030, and work for more outcomes in bilateral cooperation in all areas. China will increase communication and coordination with Saudi Arabia on energy policy, expand the scale of crude oil trade, enhance cooperation on exploration and development, and deliver on the Sino-Saudi Gulei Ethylene Complex Project and other large-scale energy cooperation projects, said Xi.

Xi noted that not long ago, over 100 Saudi learners of Chinese language jointly wrote to him in Chinese, expressing their passion for Chinese language, and he was very delighted for that.

China will work with Saudi Arabia to further advance cooperation on Chinese language education. China has decided to designate Saudi Arabia as a tourist destination for Chinese group visitors, so as to expand mutual visits and people-to-people exchange between the two sides, said Xi.

Xi pointed out that China supports Saudi Arabia in playing a bigger role in international and regional affairs, and will step up communication and coordination with Saudi Arabia at the United Nations, the Group of Twenty (G20) and other multilateral platforms.

Under the current situation, to convene the first China-Arab States Summit and the first China-Gulf Cooperation Council (GCC) Summit is of special significance and will play a strategic role in spearheading China-Arab relations and China-GCC relations in the next stage. China looks forward to working with Saudi Arabia and Arab states to turn the two summits into milestone events in the history of China-Arab relations and China-GCC relations, and bring these relations to new heights, said Xi.

The Chinese economy has maintained robust growth, and Saudi Arabia is striving to realize its Vision 2030. Saudi Arabia looks forward to working with China to enhance mutual support, and jointly elevate their comprehensive strategic partnership to a higher level, said the crown prince.

It is believed that Xi's visit will become an important milestone in the history of this relationship. It will help secure more achievements of bilateral cooperation in various areas, deliver more benefits to the two peoples, and facilitate the common development and prosperity of the two countries, he said.

Saudi Arabia will continue to actively engage in Belt and Road cooperation with China and expand trade and two-way investment. It welcomes more Chinese companies to take an active part in the industrialization process of Saudi Arabia, including the construction of major infrastructure and energy projects, and enhance cooperation in such areas as automobile industry, science and technology, chemical industry and mining, he said.

Saudi Arabia appreciates China's support for its Middle East Green Initiative, and will work with China to strengthen cooperation on areas such as clean energy and green development and to increase mutual visits and cultural exchanges, he said.

It hopes that China will continue to help it enhance its Chinese language teaching capacity. It also appreciates China for supporting Saudi Arabia to become a dialogue partner of the Shanghai Cooperation Organization, and will increase communication and coordination with China on multilateral occasions such as the G20 and BRICS, he said.

It will work with China to jointly respond to challenges such as energy security, food security and climate change, maintain close dialogue and cooperation on major regional hotspots, and jointly contribute to upholding regional peace, security and stability, and achieving common security in the region, he said.

Saudi Arabia will play an active role for the development of relations between Arab states and China and between GCC countries and China, he said, expressing his full confidence in the future of Saudi Arabia-China relations.

The two leaders attended the ceremony for exchanging documents on Belt and Road cooperation, judicial, education, hydrogen energy, investment and housing cooperation, among others.

The two sides issued the Joint Statement Between the People's Republic of China and the Kingdom of Saudi Arabia.

After the talks, Xi attended the welcome banquet hosted by the crown prince on behalf of King Salman. 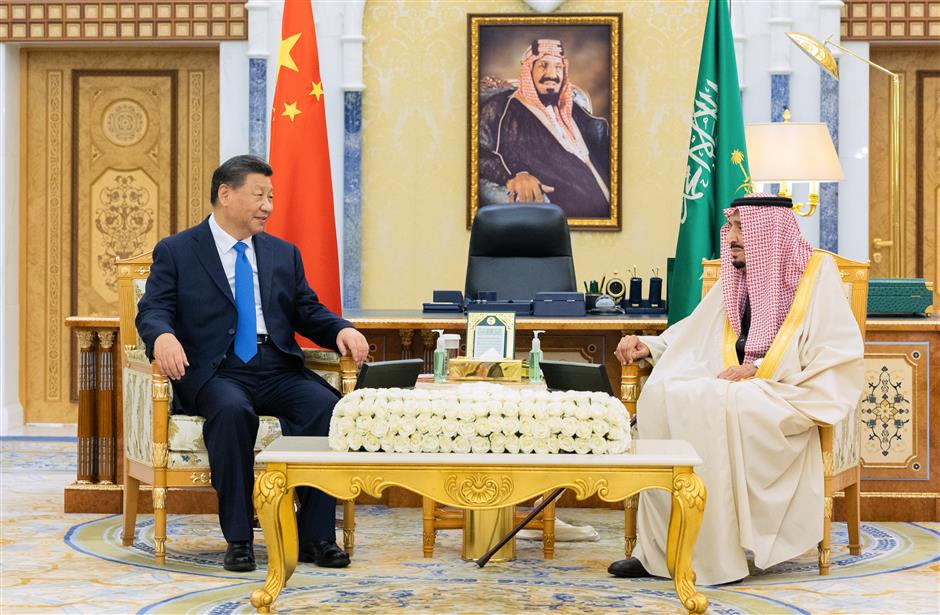 On the same day, Xi also held talks with King Salman, during which he said that China stands ready to further strengthen strategic communication and deepen cooperation across the board with Saudi Arabia to deliver for the development interests of the two countries and safeguard world peace and stability.

For his part, King Salman noted that he highly values relations with China and is ready to work with Xi to advance Saudi Arabia's comprehensive strategic partnership with China and deliver more benefits to both peoples sharing friendly relations. This is also conducive to regional and global peace, stability and tranquility.

The two heads of state co-signed in person the comprehensive strategic partnership agreement between the People's Republic of China and the Kingdom of Saudi Arabia, and agreed to take turns to host biennial meetings between the heads of state of the two countries.

Xi arrived here Wednesday afternoon to attend the first China-Arab States Summit and the China-GCC Summit, and pay a state visit to Saudi Arabia at the invitation of King Salman.