UNGA adopts resolution urging end to US embargo on Cuba 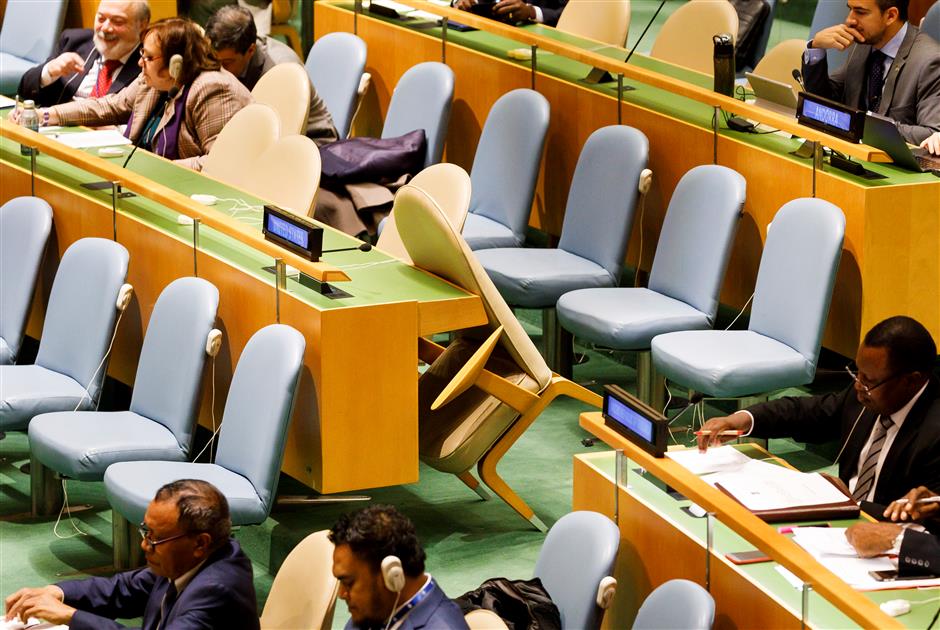 The UN General Assembly on Thursday adopted a resolution calling for an end to the US embargo on Cuba, marking the 28th time it has passed such resolutions.

After dozens of nations and international groups debated on a draft resolution for two days, 187 UN member states voted in favor of the resolution, while the United States, Israel and Brazil voted against it, and Colombia and Ukraine abstained.

The resolution reiterates a call upon all states to refrain from "promulgating and applying" laws and measures whose "extraterritorial effects" affect the sovereignty of other states, in reference to such regulations as the United States' Helms-Burton Act passed in 1996.

Despite the political weight they carry, resolutions adopted by the General Assembly are not legally-binding and thus their implementation cannot be enforced.

The resolution requests the UN secretary-general to prepare a report on the implementation of the present resolution and to submit it to the assembly at its 75th session, which starts in September 2020.

The United States first imposed an arms embargo on Cuba in 1958. Since 1960, Washington has introduced a series of restrictions in various sectors, including sanctions on financial transactions, trade and travel.

During the debate on Thursday, both US Permanent Representative to the United Nations Kelly Craft and Cuban Foreign Minister Bruno Rodriguez cited the Universal Declaration of Human Rights to make their case.

Craft listed rights of which she accused the Cuban government of depriving their people, saying "the United States is not responsible for the Cuban regime's endless abuses of its people."

He gave examples of suffering Cuban patients who could not get US-manufactured ventricular assist devices and expandable prosthesis, and thus could not be treated properly.

"We reject the manipulation of human rights for political purposes, and we reject double standards," he said.

Moreover, the Cuban foreign minister pointed to "an escalation in aggression against Cuba" under US President Donald Trump, whose administration "does not conceal its intention, which is economically to suffocate Cuba and to increase damage."

US-Cuba relations have soured since Trump assumed office in 2017. The Trump administration has partially rolled back the detente initiated by former president Barack Obama and reverted to Cold War rhetoric, while maintaining re-established diplomatic ties.

Since 1992, Cuba has presented yearly a resolution seeking to end the US blockade. The General Assembly has adopted all of them.

The United States consistently voted against these resolutions, but in 2016 abstained for the first time amid a rapprochement with Cuba under Obama.