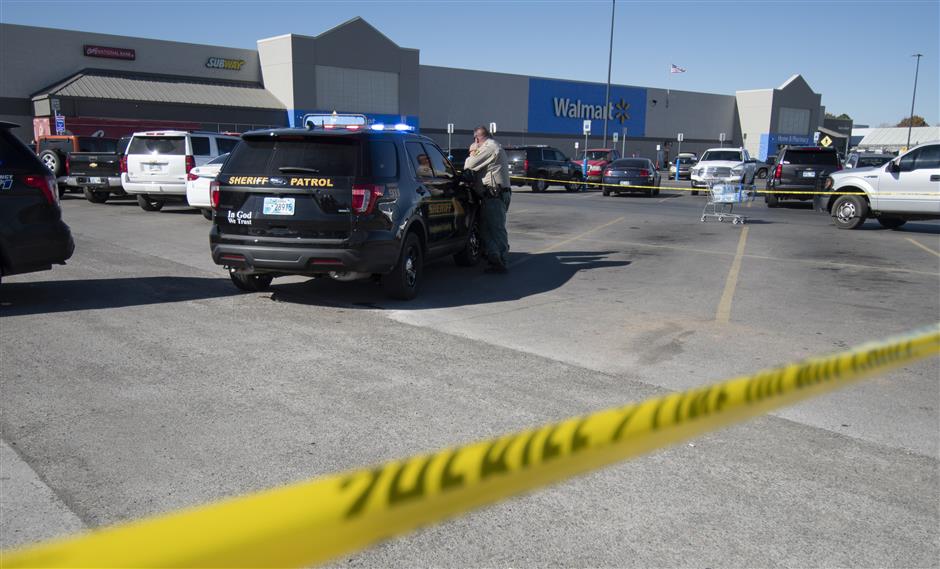 A police officer maintains a security line after a shooting in a Walmart parking lot on November 18 in Duncan, Oklahoma.

Three people were killed in a shooting early Monday outside a Walmart store in Oklahoma, including the assailant, police said, the latest in a string of deadly gun attacks at the popular supermarket chain.

Danny Ford, the police chief in the town of Duncan, said the shooting — an apparent domestic dispute — took place shortly before 10am (4pm GMT) in a parking lot in front of the store.

"We have three individuals that are deceased. We have two white males and a white female. Two of the victims are inside the vehicle, one is outside the vehicle," said Ford.

A handgun was also found at the scene, police said.

Witnesses told local news channels that the shooter approached his victims while they were inside the vehicle, opening fire on them.

He then turned his weapon on himself when a fourth man reportedly pulled out a firearm and challenged the shooter, they said.

Family members at the scene said the shooting was a domestic dispute between a husband and his wife, a local Fox news affiliate reported.

A Walmart spokeswoman told Fox that no staff members were involved in the incident in Duncan, a town of 22,000 inhabitants some 120 kilometers south of Oklahoma City, the state capital.

Schools in the area had been placed on lockdown temporarily before being given an "all clear" by local police, the local school district said in a statement.

At the start of this month, a new permitless carry law came into effect in the central US state, allowing anyone over 21 and without a felony conviction to carry a gun without a permit or a license.

A gunman killed 22 people in a Walmart store in August in El Paso, Texas, while another Walmart store in Mississippi was the scene of a shooting in late July, when a disgruntled employee killed two co-workers and wounded a police officer.

In the El Paso shooting, the 21-year-old gunman said he had launched the deadly attack in response to what he called a "Hispanic invasion" of Texas.

Walmart said in the wake of the two shootings inside its stores within a week of each other that it would limit sales of guns and ammunition.