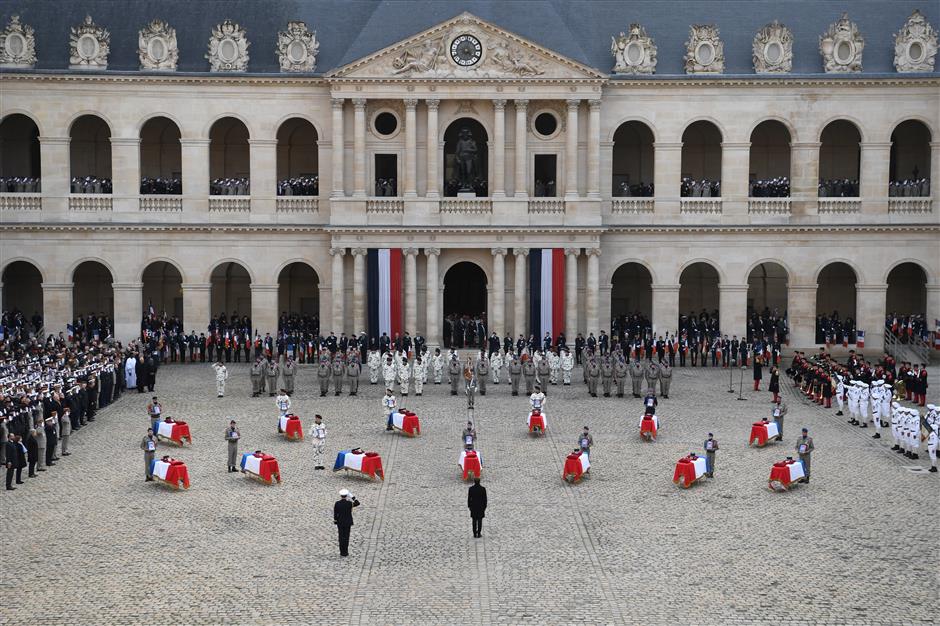 France's President Emmanuel Macron stands in front of the coffin of the 13 French soldiers who died in a helicopter collision in Mali during the tribute ceremony at the Invalides monument in Paris on December 2, 2019.

President Emmanuel Macron on Monday paid tribute to the "sacrifice" of 13 soldiers killed in a helicopter collision while battling jihadists in Mali, a disaster that has prompted fresh questioning of the costs of France's six-year campaign in West Africa.

The soldiers died when two helicopters collided last Monday while pursuing jihadists in northern Mali, where militant violence has soared in recent months.

It was the biggest single-day loss for the French military in nearly four decades, rekindling doubts about the effectiveness of France's 4,500-member Barkhane operation in Mali and four other countries in the Sahel.

Macron placed a Legion d'Honneur medal, France's highest award, on each coffin of the 13 soldiers, draped in the red, white and blue of the French flag.

"Today we honor not only the duty of those who served France, but their clear and profound acceptance of this duty," he said at the ceremony attended by the country's political and military leaders at the Invalides complex in Paris.

"They died while fighting for France, for the protection of the people in the Sahel, for the security of their fellow citizens and for the world's freedom — for all of us here," he said.

"I bow before their sacrifice."

Some 2,500 people, including dozens of comrades from the fallen soldiers' regiments, attended the commemoration, which was also broadcast on a giant screen outside the Invalides.

Hundreds of people had lined streets earlier as the motorcade bearing the coffins crossed the ornate Alexandre III bridge heading for the Invalides military hospital and museum.

Margot Louvet, 23, came from Gap in southeast France for the procession, wearing a T-shirt with the official portrait of one of the soldiers killed, her friend Antoine Serre, 22.

"Being here is a way to mourn him, and realize that he won't be coming back," she told AFP while fighting back tears.

'All options on the table'

The French forces in Mali are tasked with training local security forces to take on the jihadists, but so far these remain woefully unprepared despite years of pledges of more international funding and equipment.

Forty-one French soldiers have now died in the Sahel since the intervention began in 2013, when insurgents swept into Mali's north and rapidly advanced before being pushed back.

But despite France's presence the jihadists have regrouped to carry out deadly attacks and violence has spread to neighboring countries.

Macron has promised a thorough review of the Barkhane operation in the wake of the helicopter accident, vowing that "all options are on the table."

He also reiterated his call last week for EU allies to step up their participation in the West Africa operation after years of failing to secure significant support.

Only Britain has contributed helicopters and security personnel, while the US provides intelligence on jihadist movements across an area the size of Western Europe.

So far, only the far-left France Unbowed party has openly called for the Barkhane troops to be brought home.

An Ifop poll for the Lettre de l'Expansion newsletter, published on Monday, showed that 58 percent of respondents approve of the Sahel operation, a level hardly changed from a previous poll in March 2013.

But controversy flared over the weekend after the satirical weekly Charlie Hebdo published a series of cartoons online associating the 13 soldiers' deaths with the army's recent recruitment campaign.

In one drawing, Macron stands before a coffin in front of the slogan: "I joined the ranks to stand out from the crowd."

The French army's chief of staff, General Thierry Burkhard, expressed his "indignation" at the cartoons, saying in an open letter they sullied the period of mourning for the bereaved families.

The magazine's editor Laurent "Riss" Sourisseau defended on Sunday the magazine's "satirical spirit" while acknowledging the importance of the work of the French army and the soldiers' sacrifice.

Mali's President Ibrahim Boubacar Keita also attended the ceremony, as he tries to defuse growing hostility at home to French and other foreign forces helping to fight Islamic militants.

Keita on Saturday urged Malians not to "bite the hands of those who give us theirs today."

Since January, more than 1,500 civilians have been killed in jihadist violence in Mali and Burkina Faso, and more than 1 million people have been internally displaced across the five countries, the UN said this month.