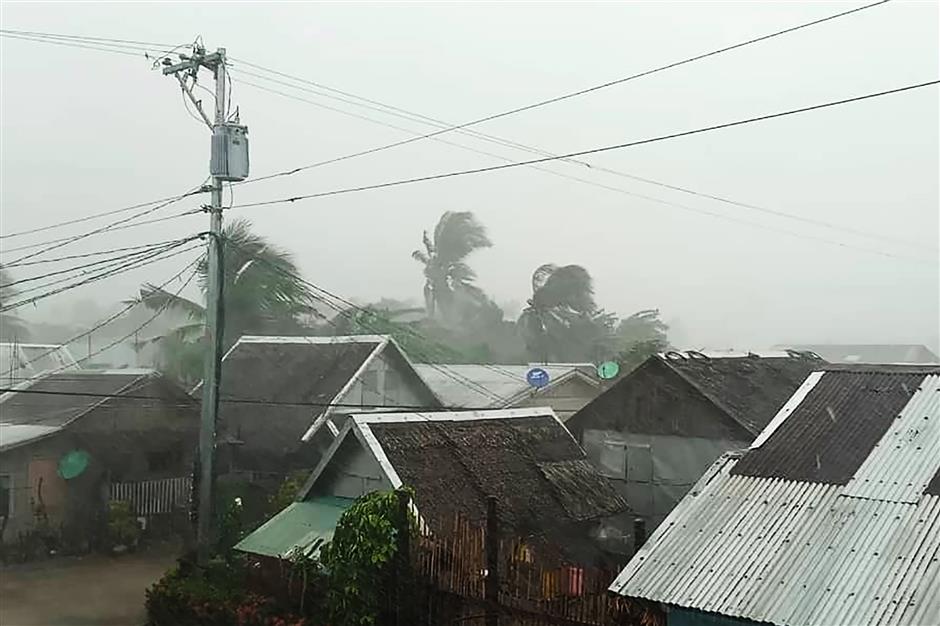 Typhoon Kammuri on Tuesday lashed the Philippines with fierce winds and heavy rain, as hundreds of thousands took refuge in shelters and the capital Manila prepared to shut down its international airport over safety concerns.

The powerful storm, which blew in windows and sheared off roofs, roared ashore late Monday and was due to pass south of Manila — home to some 13 million people — and thousands of athletes at the regional Southeast Asian Games.

Forecasters said Kammuri remained strong, with sustained winds of up to 155 kilometers per hour, and maximum gusts of 235 kph as it tracked northwest.

"We're still assessing the damage but it looks like it's severe," said Luisito Mendoza, a disaster officer in the town where the storm made landfall.

"There is one place where water levels reached the roof... our own personnel got hit by shattered glass," he added, saying many trees and power poles were felled by wind.

The managers of Manila's Ninoy Aquino International Airport said operations were expected to halt at 11am (3am GMT) as a precaution against high winds.

Reopening time was not clear, but authorities gave an estimate of 11pm and noted their decision would depend on the weather.

About 340,000 people had been evacuated from their homes in the central Bicol region, disaster officials said.

However, some residents opted to stay put even as the storm began to strike.

"The wind is howling. Roofs are being torn off and I saw one roof flying," local resident Gladys Castillo Vidal told AFP.

"We decided to stay because our house is a two-story made of concrete... Hopefully it can withstand the storm."

The Philippines is hit by an average of 20 storms and typhoons each year, killing hundreds and putting people in disaster-prone areas in a state of constant poverty.

The country's deadliest cyclone on record was Super Typhoon Haiyan, which left more than 7,300 people dead or missing in 2013.

Kammuri had already snarled some plans for the SEA Games, which opened on Saturday and are set to run through December 11 in and around Manila.

The windsurfing competition was halted as a precaution and triathlon events were held earlier than scheduled.

Ramon Suzara, the chief operating officer of the organizing committee, said contingency plans were in place for bad weather, but the duration of the Games would not be extended.

"Everything is set," Suzara told reporters. "For contingency, all venues, all competition managers, technical delegates are ready."

The storm is the latest trouble for the Games, which saw a series of transport hiccups and a rush of last-minute construction ahead of the opening ceremony.