Trump lashes out at NATO, again 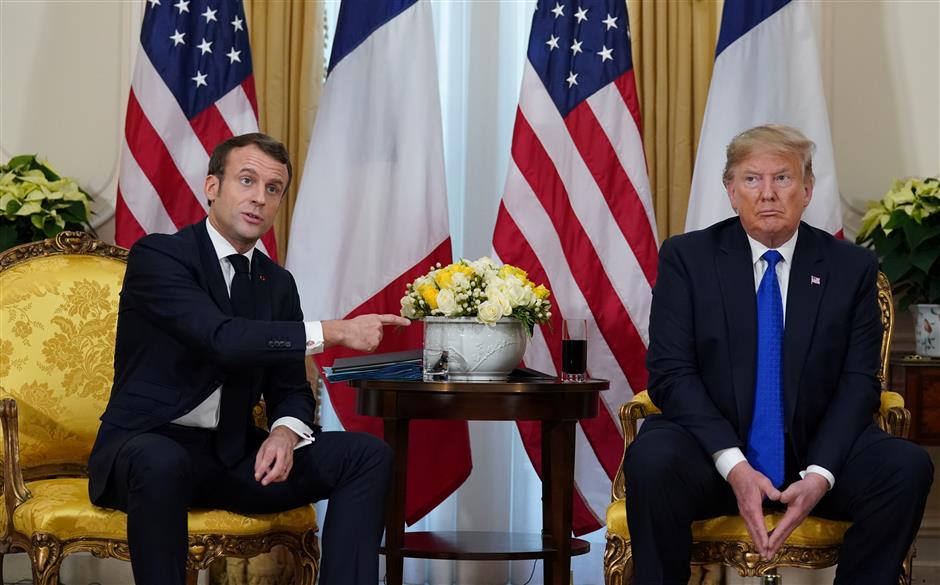 US President Donald Trump and France's President Emmanuel Macron hold a meeting ahead of the NATO summit in Watford, in London, Britain, on Tuesday.

US President Donald Trump lashed out at European allies before a NATO anniversary summit in London on Tuesday, singling out France’s Emmanuel Macron for “very nasty” comments on the alliance and Germany for spending too little on defense.

Underlining the breadth of strife in a transatlantic bloc hailed by its backers as the most successful military alliance in history, Trump demanded that Europe pay more for defense and also make concessions to US interests on trade.

The attack echoed a similar tirade by Trump ahead of the North Atlantic Treaty Organisation’s last summit in July 2018.

It will add to the growing doubts over the future of the 29-member alliance, described last month by Macron as “brain dead” in the run-up to a London meeting intended to be a 70th anniversary celebration.

“It’s a tough statement, though, when you make a statement like that,” Trump told reporters as he met the head of NATO in London.

“That is a very, very nasty statement to essentially 28, including them, 28 countries,”

“Nobody needs NATO more than France,” he said.

He also said that France, where Macron is seeking to push through delicate and controversial reforms of a large state sector, was “not doing well economically.”

Trump explicitly linked his complaint that Europe does not pay enough for NATO’s security missions to his staunch “America First” defense of US commercial interests, saying it was time for Europe to “shape up” on both fronts.

Dismissing recent signals from Germany that it was ready to do more to match a NATO target of spending 2 percent of national output on defense, Trump accused it and other nations which spend less than that of being “delinquent.”