US Senate votes to restrain Trump on Iran 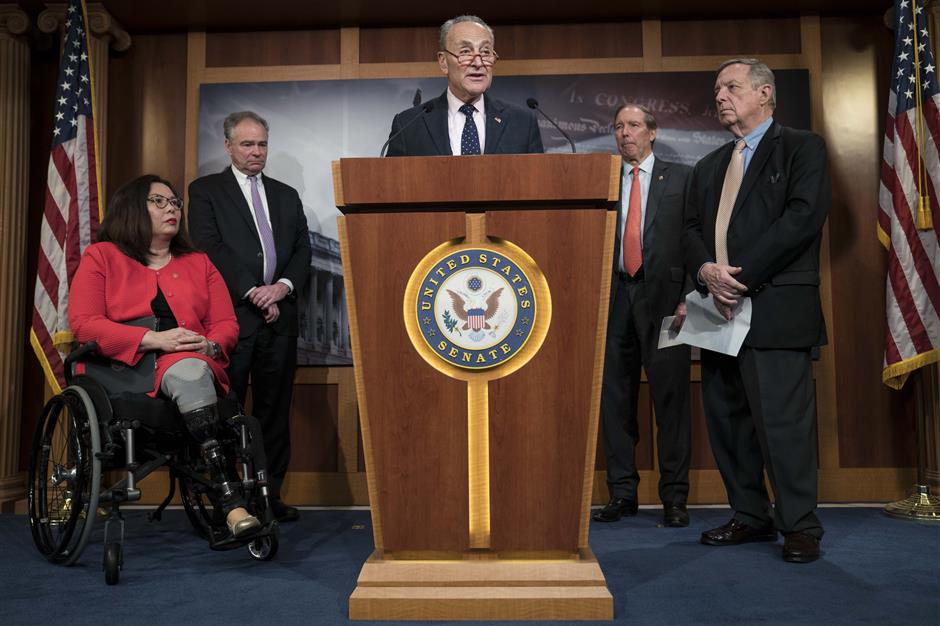 US Minority Leader Sen. Chuck Schumer speaks during a news conference following the bipartisan Senate vote on the War Powers Resolution on Iran with senators Tammy Duckworth, Tim Kaine, Tom Udall and Dick Durbin at the US Capitol on February 13, 2020, in Washington, DC.

The US Senate voted on Thursday to rein in President Donald Trump from attacking Iran, sharply rebuking his foreign policy despite a week earlier acquitting him in his impeachment trial.

Eight senators of Trump's Republican Party, which enjoys a majority, bucked their leadership to join Democrats in a resolution that bars any military action against Iran without an explicit vote from Congress.

"The Senate just sent a clear shot across the bow — a bipartisan majority of senators don't want the president waging war without congressional approval," Democratic Senate leader Chuck Schumer said after the vote.

The resolution will head to the Democratic-led House of Representatives, which passed a similar text last month.

But much like an earlier attempt by Congress to end US support for Saudi Arabia's devastating offensive in Yemen, Trump is nearly certain to issue a veto, with lawmakers lacking the two-thirds majority to overturn it.

Moments before the vote, a rocket slammed into an Iraqi base housing US troops in the first attack on the site since a December 27 barrage killed a US contractor, according to Iraqi and US security sources. There were no immediate reports of casualties.

The contractor's death set off an escalating crisis in which Trump ordered a drone strike at the Baghdad airport that killed Qassem Soleimani, Iran's most powerful general.

Democratic senator Tim Kaine introduced the resolution after Soleimani's death, concerned that the United States was rushing into another Middle East war without debate.

While warning of dire consequences of an escalating conflict with Iran, Kaine said his main point was to restore the authority of Congress to declare war, as spelled out in the US Constitution.

"An offensive war requires a congressional debate and vote. This should not be a controversial proposition," Kaine said in a speech on the Senate floor.

The resolution makes an exception if the United States is "defending itself from an imminent act."

"My 21-month-old toddler has better self-control than this president does," she told reporters.

Tensions have soared between the United States and Iran since 2018 when Trump withdrew from a denuclearization accord negotiated by his predecessor Barack Obama and imposed sweeping sanctions aimed at reducing Tehran's regional clout.

The Senate defeated a motion by senator Tom Cotton, a vociferous opponent of Iran, to gut the resolution by exempting any military action directed at "designated terrorist organizations."

The Trump administration last year classified the Islamic Revolutionary Guards Corps as a terrorist organization, the first time the United States has done so to a government body.

"There is no war with Iran. An air strike is not a war. Punishing Iran for killing an American citizen is not a war," he said.

"In fact, the president's decision to eliminate Soleimani has made war much less likely because it showed Iran that its terrorism would come at a price."

But eight Republicans, all of whom voted to acquit Trump in his impeachment trial, joined the Democrats.

Senator Susan Collins, a closely watched moderate Republican, said the resolution did not cease ongoing activities such as US Navy patrols around the Strait of Hormuz, a crucial chokepoint for oil shipments.

Among other Republicans who voted yes was Mike Lee, who said a classified session by the Trump administration after the Soleimani killing was uninformative and the "worst" defense briefing he has ever received.

Senator Mitt Romney, the sole Republican who decided to convict Trump, voted against restricting him on Iran.