Italy has logged a shocking spike in its already staggering coronavirus death toll, with officials warning the peak of the crisis was still days away, as the global infection rate surges relentlessly upwards.

With more than 300,000 people infected in Europe alone, the disease shows few signs of slowing, and has already cast the world into a recession, economists say.

In the US, which now has more than 104,000 COVID-19 patients, President Donald Trump invoked wartime powers Friday to force a private company to make medical equipment, as the country's overburdened healthcare system struggles to cope.

"Today's action will help ensure the quick production of ventilators that will save American lives," Trump said as he issued the order to auto giant General Motors.

With 60 percent of the country in lockdown, and infections skyrocketing, Trump also signed the largest stimulus package in US history, worth $2 trillion.

It came as Italy recorded almost 1,000 deaths from the virus on Friday -- the worst one-day toll anywhere since the pandemic began.

One coronavirus sufferer, a cardiologist from Rome who has since recovered, recalled his hellish experience at a hospital in the capital.

"The treatment for the oxygen therapy is painful, looking for the radial artery is difficult. Desperate other patients were crying out, 'enough, enough'," he told AFP.

In one bright spot, infection rates in Italy continued their recent downward trend. But the head of the national health institute Silvio Brusaferro said the country was not out of the woods yet, predicting "we could peak in the next few days".

Spain too said its rate of new infections appeared to be slowing -- despite also reporting its deadliest day. 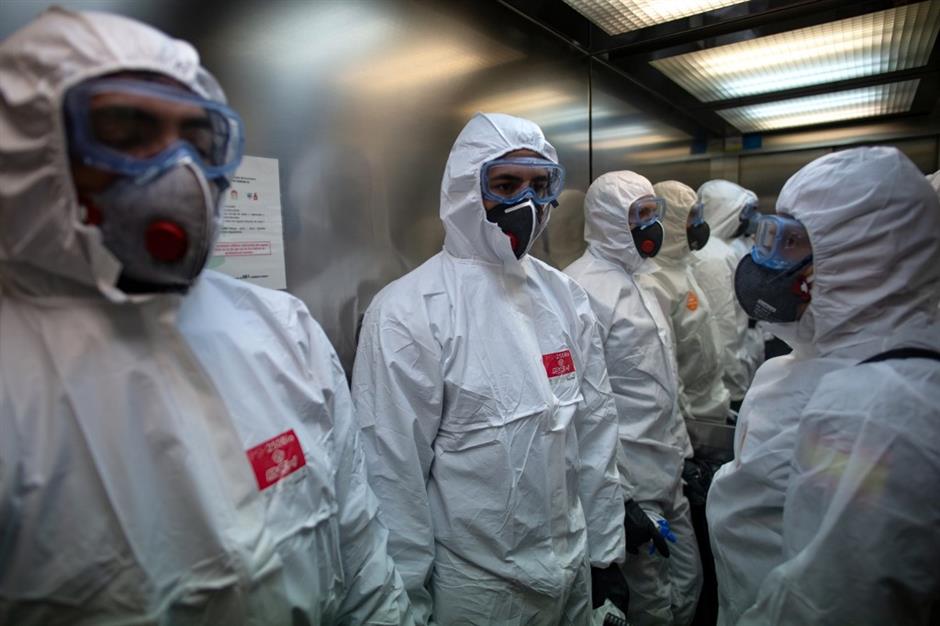 Members of the Military Emergencies Unit use a lift as they carry out a general disinfection at the Sant Antoni extended care facility in Barcelona on March 27, 2020. The death toll in Spain soared over 4,800 today after 769 people died in 24 hours, in what was a record one-day figure for fatalities, the government said. Spain has the world's second-highest death toll after Italy, and has so far suffered 4,858 deaths, while the number of cases jumped to 64,059.

Europe has suffered the brunt of the coronavirus crisis in recent weeks, with millions across the continent on lockdown and the streets of Paris, Rome and Madrid eerily empty.

In Britain, the two men leading the country's fight against the coronavirus -- Prime Minister Boris Johnson and his Health Secretary Matt Hancock -- both announced Friday they had tested positive for COVID-19.

"I am now self-isolating, but I will continue to lead the government's response via video-conference as we fight this virus," Johnson, who had initially resisted calls for a nationwide lockdown before changing course, wrote on Twitter.

Meanwhile, other countries across the world were bracing for the virus's full impact, with AFP tallies showing more than 26,000 deaths globally.

The World Health Organization's regional director for Africa warned the continent faced a "dramatic evolution" of the pandemic, as South Africa also began life under lockdown and reported its first virus death.

In a sign of how difficult the stay-at-home order could be to enforce, police came up against hundreds of shoppers trying to force their way into a supermarket in Johannesburg on Friday, while the streets of a nearby township buzzed with people and traffic.

However, two months of almost total isolation appeared to have paid off in China's Wuhan, as the Chinese city of 11 million people where the virus first emerged partially reopened.

Since January, residents have been forbidden to leave, with roadblocks installed and millions subjected to dramatic restrictions on their daily life.

But on Saturday people were allowed to enter the city, and most of the subway network restarted. Some shopping centres will open their doors next week.

In the United States, known infections jumped past 104,000, the world's highest figure, with 1,711 deaths, according to Johns Hopkins University.

In New York City, the US epicentre of the crisis, health workers battled a surging toll -- including an increasing number of younger patients -- while struggling with a severe shortage of protective equipment.

To ease the strain on virus-swamped emergency rooms in Los Angeles, a giant US naval hospital ship docked there to take patients with other conditions.

In New Orleans, famed for its jazz and nightlife, health experts believe the month-long Mardi Gras in February could be largely responsible for its severe outbreak.

"This is going to be the disaster that defines our generation," said Collin Arnold, director of the Office of Homeland Security and Emergency Preparedness for New Orleans.

As well as the trillion-dollar recovery plan, Trump signed a separate order late Friday allowing the Pentagon to bring former troops and members of the National Guard back to active duty to help the military combat the virus, the Washington Post said, citing a Pentagon spokesman.

But as Europe and the United States struggle to contain the pandemic, aid groups have warned the death toll could be in the millions in low-income countries and war zones such as Syria and Yemen, where hygiene conditions are already dire and healthcare systems are in tatters.

"Refugees, families displaced from their homes, and those living in crisis will be hit the hardest by this outbreak," said the International Rescue Committee.

"It is clear that we have entered a recession" that will be worse than in 2009 following the global financial crisis, she said.

Meanwhile in Latin America, Sao Paulo has been hit harder by the disease than anywhere else in the region, with 68 of the 92 deaths registered in Brazil.

However the country's president Jair Bolsonaro -- who has compared the virus to a "little flu" -- declared he did not believe his own government's statistics on the toll, saying he suspected they had been inflated to serve "political interests".