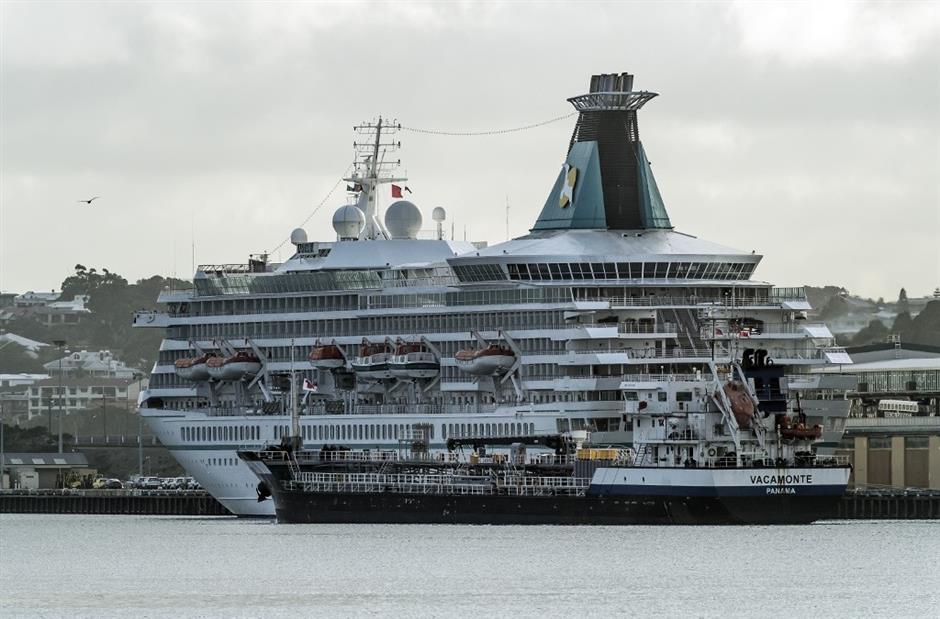 Cruise ship MV Artania is berthed at the port of Fremantle on an emergency mission with a sick patient being transferred to a hospital for coronaviros testing on March 27, 2020. Seven passengers have tested positive for COVID-19 aboard the Artania, which had been due to travel onward to South Africa but is now anchored near the port of Fremantle.

Dozens more passengers on a cruise ship docked in Western Australia showed symptoms of coronavirus Saturday after the vessel was allowed ashore following days stranded at sea in a stand-off with authorities.

The Artania had sat off the coast since Tuesday but was finally allowed to dock Friday after authorities backed down on a decision to bar the vessel.

Western Australia's premier had vowed earlier in the week that no-one on the ship would set foot on dry land but backtracked amid a spike in virus cases onboard, with one more passenger in critical condition needing admission to intensive care.

The government feared people on the boat showing COVID-19 symptoms would be refused admission onto flights out of the country and would have to remain on Australian soil, heightening the risk of infection for locals.

State premier Mark McGowan told media on Saturday the decision to permit the German vessel to dock came after a jump in suspected cases onboard that he said constituted a "crisis point".

He previously insisted the ship must continue to its next planned stop in South Africa to prevent any spread of the illness at the port city of Fremantle in Western Australia.

But dozens more people on the boat have shown symptoms and health officials onboard discovered 46 suspected coronavirus cases Saturday, with one needing admission to hospital.

Two other patients had already been evacuated from the ship earlier this week and admitted to intensive care.

The Artania was left in the waters off Fremantle after McGowan refused to let it and another ship, the Magnifica, come ashore.

The federal government has now stepped in and agreed to organise travel home for healthy passengers and has secured hospital care for any that test positive for the virus.

Around 800 people, mostly Germans, will be flown home from Western Australia in the coming days.

"There’s no perfect solutions in this whole set of events but the main thing is we don’t want passengers from cruise ships wandering around the streets," McGowan said.

"We want to get them out of Western Australia as soon as we can, if we can get them better and away quickly that’s a good outcome."

Another cruise ship, the Vasco da Gama, docked Saturday with plans underway by authorities to quarantine its Australian passengers and organise flights for its New Zealanders and Britons.

The Magnifica meanwhile was expected to leave Fremantle later Saturday after restocking.

Cruise ship arrivals have been connected to at least 496 coronavirus cases and one death in Australia, which has more than 3,600 COVID-19 cases and 14 deaths linked to the virus.