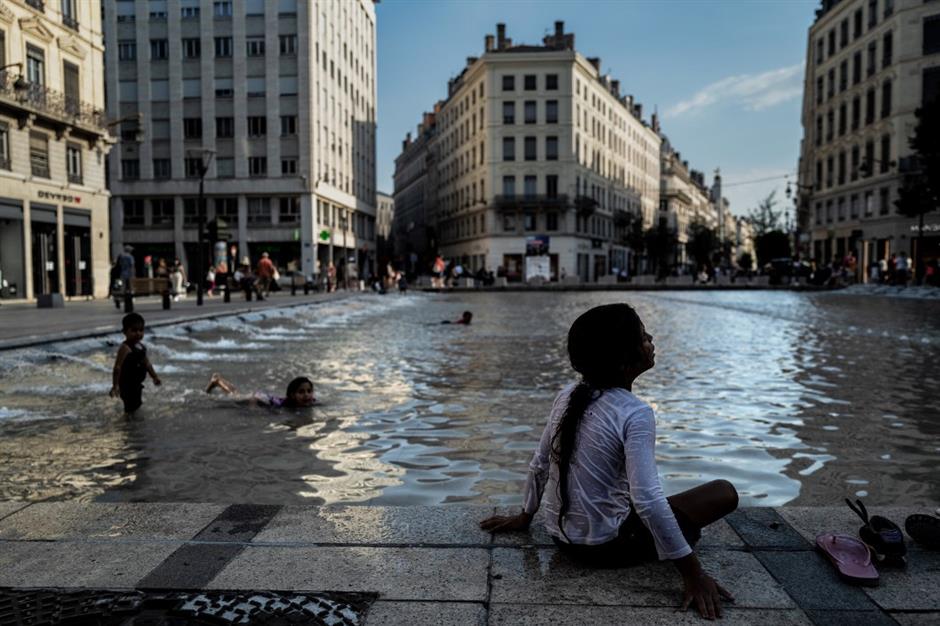 Children play in a fountain to cool off in the center of Lyon, on July 30, 2020, as a heat wave hits France.

Intense heat spread across much of France on Friday ahead of a heavy holiday travel weekend, prompting officials to warn of wildfire risks in exceptionally dry and windy conditions.

Around one-third of the country's 101 departments were on high alert, with Paris forecast to reach 40 degrees Celsius (104 Fahrenheit) in the shade after several cities hit record highs Thursday.

Authorities in the capital imposed driving restrictions to limit ozone pollution as tens of thousands of Parisiens prepared to flee to cooler climes, according to the nation's traffic surveillance agency.

"The heatwave requires the state to be vigilant, and everyone to be cautious," Prime Minister Jean Castex said while visiting with firefighters in Bourg-en-Bresse, southeast France.

Earlier Friday, a dramatic wildfire in the middle of the Atlantic coast resort of Anglet was brought under control after it destroyed nearly a dozen homes and forced around 100 people to evacuate.

The blaze erupted late Thursday in the Chiberta forest park at Anglet in southwest France, whose beaches just north of Biarritz draw surfers from around the world.

It was the latest of several that erupted in southern and central France this week, kicking off the annual fire season which officials warn could be worsened by the drought and dry heat.

Officials also urged families and neighbours to check in on the elderly, and retirement homes are on high alert since air-conditioners are being discouraged over fears they could foster coronavirus contagions.

An increase in COVID-19 cases prompted officials to tighten face mask requirements in several cities this week, with many making them mandatory outdoors despite the heat.

Last year was France's hottest on record, and Meteo France has warned that global warming could double the number of heatwaves by 2050.