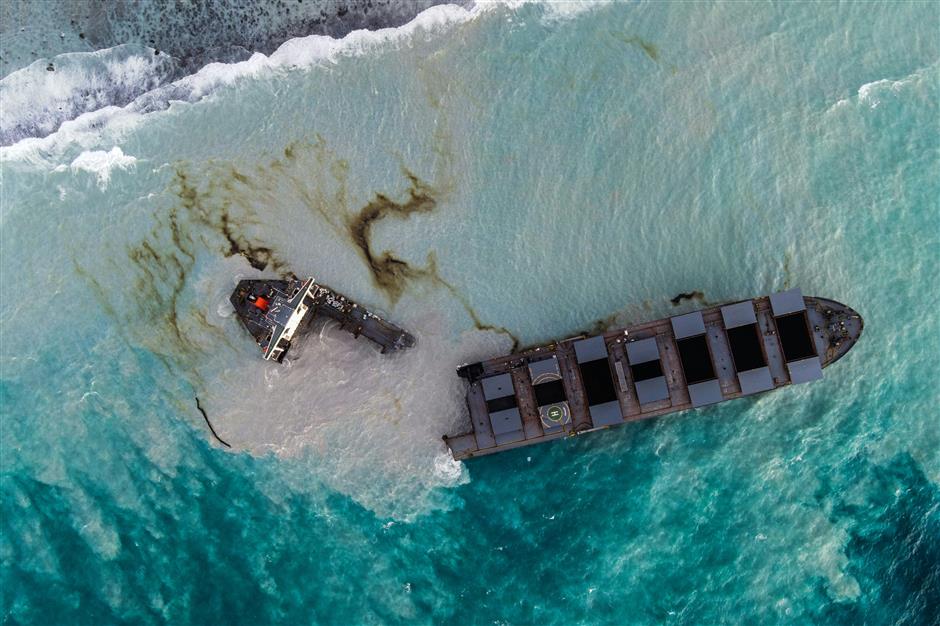 This aerial picture taken yesterday shows the MV Wakashio bulk carrier that ran aground and broke into two near Blue Bay Marine Park in Mauritius. The Japanese-operated ship leaked more than 1,000 tons of oil into the pristine waters off the Mauritius coast.

A ship that has leaked more than 1,000 tons of oil in pristine waters off the Mauritius coast has split in two, its Japanese operator announced on Sunday.

The bulk carrier MV Wakashio ran aground on a coral reef off the southeastern coast of Mauritius on July 25 and began oozing oil more than a week later, threatening a protected marine park boasting mangrove forests and endangered species.

Mauritius declared an environmental emergency and salvage crews raced against the clock to pump the remaining 3,000 tons of oil off the ship.

“It was confirmed on August 15 that the vessel has broken into two,” the ship’s operator Mitsui OSK Lines said in a statement, noting that the information came from the vessel’s owner, Nagashiki Shipping.

The split was caused by a crack in a cargo hold on its stern side, Mitsui said.

Officials had been preparing for the development for days, and images taken on Saturday indicated it was inevitable, with the two pieces only partially attached.

Nearly all the remaining 3,000 tons of oil had been pumped off the ship by that time, though there were still 90 tons on board, much of it residue from the leakage.

Mitsui noted on Sunday that “an amount of unrecovered oil is believed to have leaked out of the vessel.”

The salvage team intends to pull the front two-thirds of the ship out to sea using two tugboats and let it sink to avoid further damage to the Mauritian coastline, said a police official in the capital Port Louis, speaking on condition of anonymity.