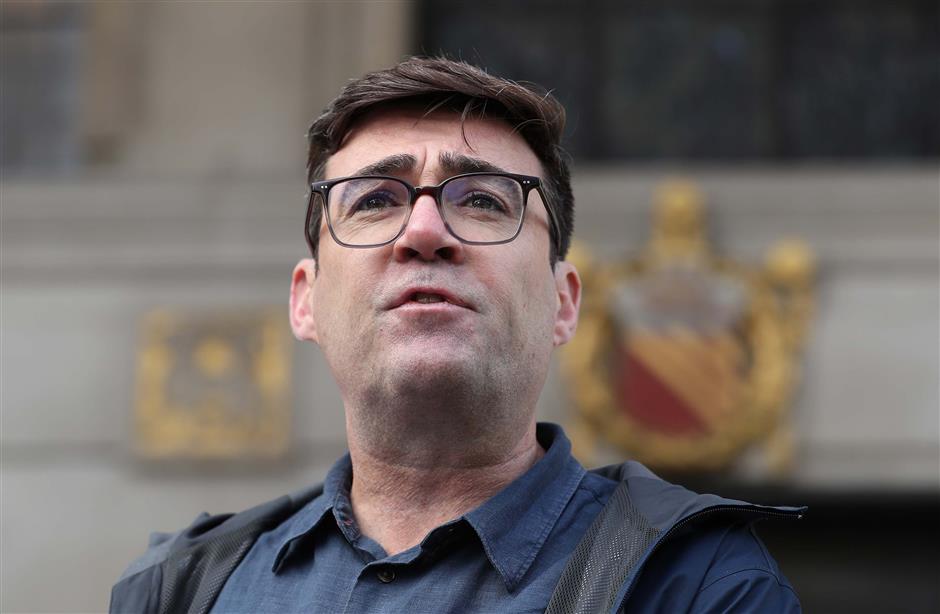 Greater Manchester mayor Andy Burnham speaks to the media outside the Central Library in Manchester, northwest England, on October 15, 2020.

British Prime Minister Boris Johnson on Tuesday said that Greater Manchester will move into Tier Three, the highest level of COVID-19 restrictions, from midnight on Thursday.

The prime minister, speaking during a virtual press conference at Downing Street, said that Greater Manchester will receive a support package of 22 billion pounds (US$28.48 billion).

The Tier Three restrictions will see closure of pubs and bars in the region unless they serve substantial meals.

Betting shops, casinos, bingo halls, adult gaming centers and soft play areas will also shut down while different households will be banned from mixing indoors and outdoors, including in private gardens.

The latest development came after the British government and Manchester leaders failed to agree on extra funding.

Earlier Tuesday, Greater Manchester mayor Andy Burnham said in a press briefing that local leaders were not offered enough support to protect people heavily affected by the restrictions as businesses close down.

Talking about the failure to reach a deal with the local leaders, Johnson said, "I do regret this...We would have a better chance of defeating the virus if we work together."

The prime minister also noted that talks on moving other areas, including South Yorkshire, West Yorkshire, Nottinghamshire and the North East, into Tier Three are continuing with local leaders.

Joining Johnson for the press conference, Jonathan Van-Tam, England's deputy chief medical officer, said that he does not believe a national "firebreak" lockdown, as urged by some politicians, would be right.

"It is clear that in the areas where it is out of control... hard measures are needed," he said. However, in some areas, levels of the disease are "very, very much lower."

The coronavirus-related deaths in Britain rose by 241 to 43,967, the highest daily death toll since June, according to official figures released Tuesday.

Meanwhile, another 21,331 people in Britain have tested positive for COVID-19, bringing the total number of coronavirus cases in the country to 762,542, the data showed.

To bring life back to normal, countries, such as Britain, China, Russia and the United States, are racing against time to develop coronavirus vaccines.