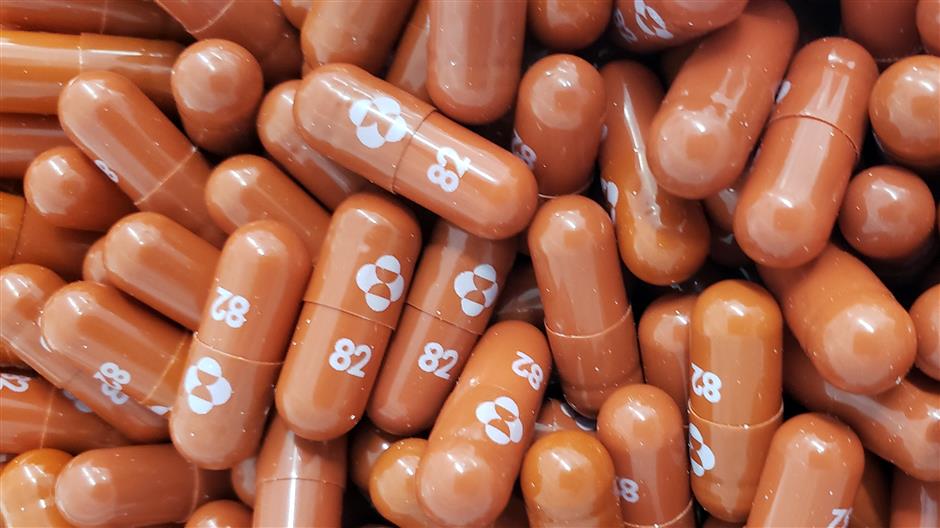 US pharmaceutical company Merck said on Friday it will seek authorization of its oral drug molnupiravir for COVID-19 after it was shown to reduce the chance newly infected patients were hospitalized by 50 percent.

A simple pill to treat the coronavirus has been sought since the start of the pandemic and Friday's announcement was hailed as a major step toward that goal.

Anthony Fauci, chief medical adviser to President Joe Biden, told reporters: "The data are impressive," and he highlighted that the trial results showed there were no deaths among patients who received the drug compared to eight deaths in the placebo group.

The US has procured 1.7 million courses of molnupiravir should it be greenlighted, with the option to buy more, and global health agency Unitaid said it was working with a partnership called ACT-Accelerator to secure supply for low- and middle-income countries.

Until now, COVID-19 therapeutics such as monoclonal antibodies and Gilead's remdesivir have been administered intravenously.

"It's very exciting to have more options that are easy to deploy," Natalie Dean, a biostatistician at Emory University who specializes in infectious diseases, told AFP.

"You can have something that's similarly effective, but if one is much easier to use, that's going to have a bigger population-level impact."

But experts also stressed that if approved the drug is not a miracle cure and should complement highly effective vaccines, rather than replace them.

In a late stage clinical trial, Merck and its partner Ridgeback Therapeutics evaluated data from around 770 patients – roughly half of whom received either a five-day course of the pill, while the other received a placebo.

All the patients had lab-confirmed COVID-19 with symptoms that developed within five days of them being assigned to their respective groups.

Of the patients who received molnupiravir, 7.3 percent were hospitalized by day 29, compared to 14.1 percent of those on a placebo – a relative risk reduction of around 50 percent.

Efficacy was said to hold up against variants of concern, including Delta, and the drug had a good safety profile.

The results were compelling enough that an independent data monitoring committee in consultation with the FDA decided to halt the trial early, which could indicate they felt it would be unethical to continue with a placebo arm.

Response from the medical community was favorable, with some notes of caution.

Eric Topol, director of the Scripps Research Translational Institute, wrote on Twitter the fact the results were so positive the trial was stopped "would be considered a Eureka moment in the fight against COVID-19."

Some experts warned it would be crucial to administer the drug early for it to be effective. Since it isn't always clear who is at risk for developing severe disease, it would have the greatest impact if it were cheap enough and safe enough to distribute widely.

Molnupiravir belongs to a class of antiviral drugs called polymerase inhibitors, which work by targeting an enzyme that viruses need to copy their genetic material, and introducing mutations that leave them unable to replicate.

Such drugs are expected to be more variant-proof than monoclonal antibody treatments, which target a surface protein of the virus that is continually evolving.

Molnupiravir was initially developed as an inhibitor of influenza and respiratory syncytial virus, two other important acute respiratory infections, by a team at Emory University.

"If it is proven to be very safe and proven to be effective, then it can be used broadly, irrespective of the diagnosis, to treat and prevent multiple respiratory infections," added Hazuda.