Back to life, back to reality: Healthy Shanghai heads out of the darkness

It has been a long, tough few months under the dark cloud of novel coronavirus here in Shanghai, but it looks like the sun is rising.

I’ve used any opportunity I could in the last few months to convince myself everything was back to normal, from people heading back to work to the city’s museums and tourist attractions opening again, with mixed results. Our workplace is still nowhere near as busy as it was before the Spring Festival, and many museums and tourist sites — like the Oriental Pearl TV Tower — soon closed again over fears of a second wave of COVID-19.

But now I can really feel life getting back to normal, and I don’t think it’s just my brain being overly optimistic with me. 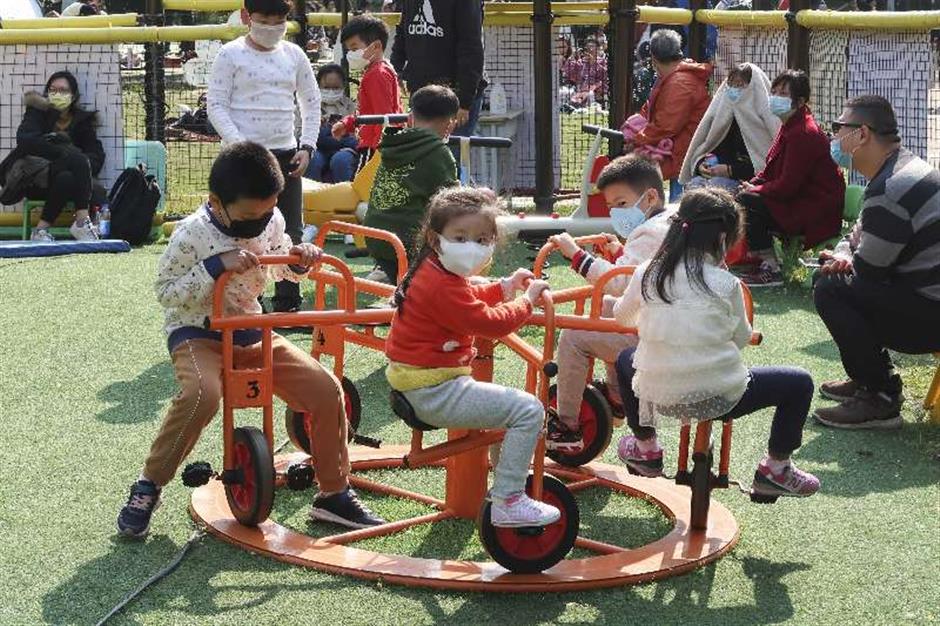 Children return to the playground as life gradually gets back to normal in Shanghai.

One of the key factors symbolizing a return to at least some form of normalcy is the announcement that students will soon return to school.

Ninth and 12th graders — middle and high school graduating students — will be able to return to school on Monday, and will become the first group of students to return since the virus forced the closure of schools and an extension of the winter vacation.

Returning to school will be staggered across grades, with others heading back on May 6 and May 18. Universities are also preparing to welcome back students, with some starting as early as next week.

Another sign that things are getting back on track is the increase in airline passengers on China’s domestic routes of late. Passenger numbers have recently recovered to about one third of the same level last year, according to the Civil Aviation Administration of China.

Daily passengers climbed to 458,300 in March, nearly a whole 70 percent higher than February’s figures, despite that month usually being one of the busiest for travel in China.

Anyone who had the chance to visit one of the city’s airports in the past few months will know just how quiet and empty they were.

China’s rail network is extensive, but recently many services have been empty, or canceled altogether, because of the battle against novel coronavirus. That’s set to change this Labor Day holiday, with around 7 million expected to get onboard to travel in the Yangtze River Delta region alone, with a peak between April 30 and May 5.

People have likely been itching for the opportunity to get out of the city, especially as many will have been holed up at home for weeks on end with no travel prospects.

For the upcoming holiday, 50 extra trains will be put into service, including on routes from Shanghai to Shenzhen, Guangzhou and Zhuhai.

Despite Shanghai being in a good position to resume many functions of normal life, there’s still a long road ahead until the city, the country and the world are in the clear.

Shanghai still has the occasional new imported case, despite local cases being reduced to zero. Luckily the city’s measures are strong enough that these cases are all caught and isolated at the border.

Harbin, in China’s northeast, faces a new battle of its own as imported cases threaten the city, especially those returning from across the border in Russia.

The World Health Organization has warned that the crisis is far from over, and that many countries are only in the beginning of their battles against the virus. Apart from the health aspects, the halt in normal life will most definitely lead to an international financial crisis that needs to be battled long after the last patient recovers.

So, while I’m relishing any semblance of normalcy here in Shanghai, it’s bitter-sweet.

“Make no mistake: We have a long way to go,” WHO chief Tedros Adhanom Ghebreyesus told a virtual media conference recently. “This virus will be with us for a long time.”

Special Reports
ADVERTISEMENT
Back to life, back to reality: Healthy Shanghai heads out of the darkness
Cultivating communal spirit through shared readings
Complacency and blame game do not suit the US role as a 'responsible' superpower
Many deserve our praise for sacrifice in fight against COVID-19
Heroes redefined after coronavirus epidemic
Rethinking agricultural efficiency at the expense of natural renewal
Vlog: Why are China's 'wet markets' open again?
Timeline points to US failures in preparedness
I hate to return to that kind of normality ...
Avoid applying old solutions in responding to the economic fallout from the pandemic
EXPLORE SHINE