On April 8, Wuhan ­— the capital city of China’s Hubei Province and home to some 10 million — opened up to the outside world after 76 days on lockdown.

The next day, April 9, I took a high-speed train there from Shanghai to check the place out for myself. The city was desolate and gray, and most people still hadn’t got used to their new-found freedom. Restaurants were still closed, the streets were still largely empty, and fear kept millions paralyzed at home.

That video received millions of views and thousands of comments, many of which were from Wuhan residents who hoped I’d come back soon, once the city woke up a bit.

And so about a month later, I found myself heading back on another high-speed train with my colleague Song Xinyi, a Wuhan local who hadn’t seen her friends and family for more than five months.

We would spend three nights at her place in Hankou, and she promised to show me her beautiful city, from a local’s perspective. 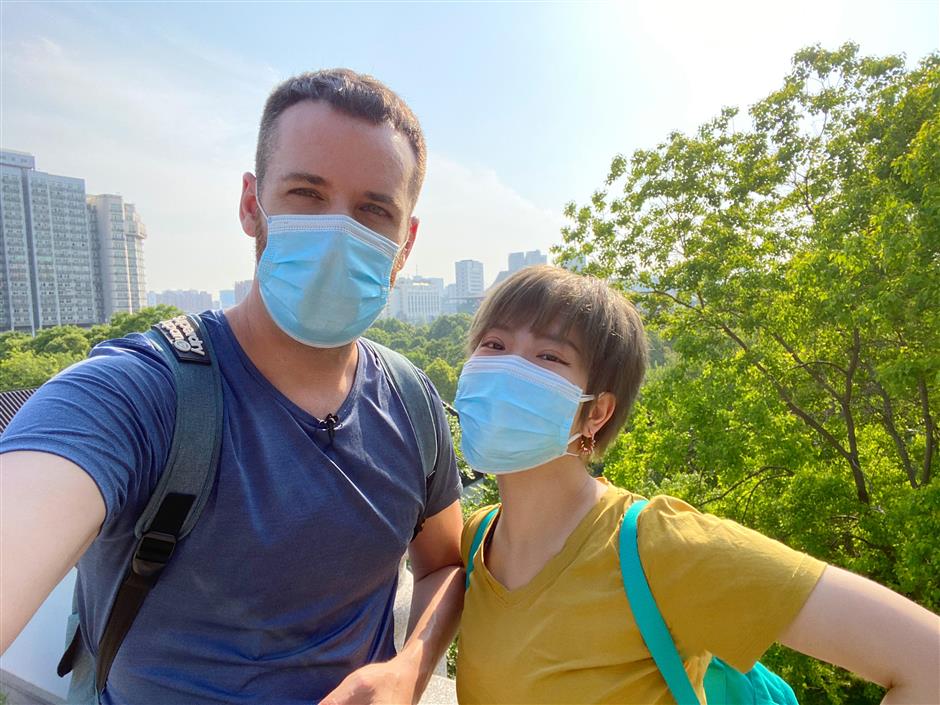 Andy and Song Xinyi outside the Yellow Crane Tower in Wuhan

When we arrived, it was hot and muggy, vastly different from a month earlier. We first headed to see two of Song’s good friends, Yueyue and Gaoma. Yueyue’s mom was waiting at the door to spray us down with sanitizer, before we were sent to wash our hands thoroughly. Then Yueyue led us to her room, where they had already picked out two sets of clothes for us to change into.

The thing they were mostly worried about was that we had just got off the high-speed train, which was a concentration of people all in a relatively confined space.

After a couple of hours, we went for a walk to Jiangtan Park, a place I visited on my last trip. On the way we checked out Wuhan Tiandi, a pedestrian street of cafes and restaurants.

The place has a definite vibe about it, and the people there seemed happy to be out with their friends again. We didn’t stop to eat, instead carrying on to Jiangtan Park.

The park was so much busier than last time, and about a dozen people were queuing to show their health QR codes, have their temperatures taken, and enjoy the magical light show along the Yangtze River. 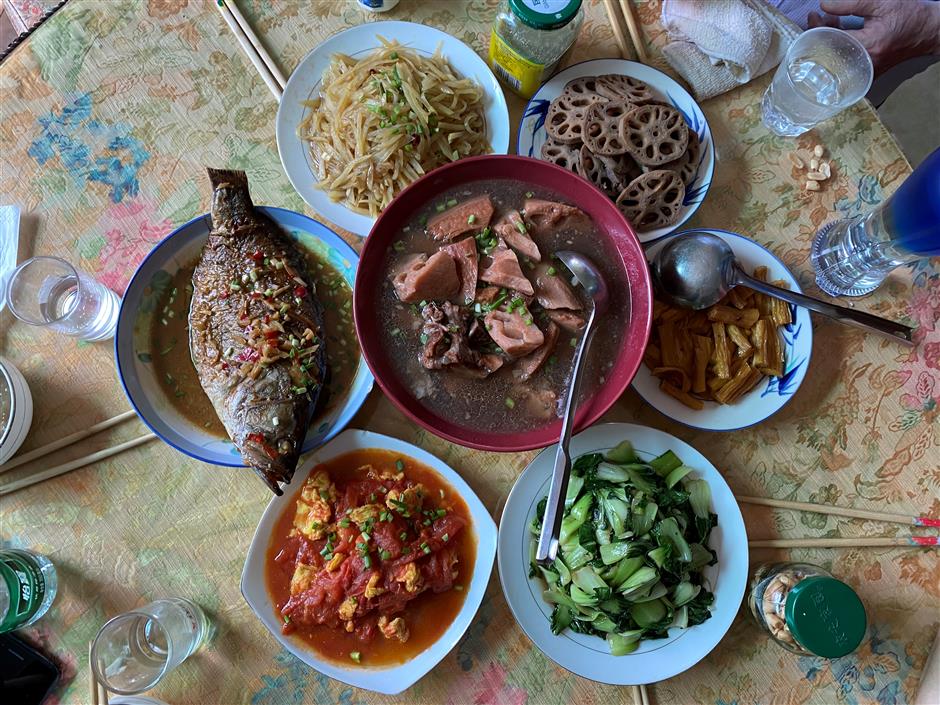 On the second day, we headed to Song’s grandparents’ home for lunch. They haven’t left home for more than three months, even though the city has been relatively open for the last four weeks.

Song’s grandma showed me how to make stir-fried tomato and scrambled eggs (番茄炒蛋), a ubiquitous dish found all across China. She probably guessed that the pork ribs and lotus root soup (排骨藕汤), a local treat, would be above my skill level.

Then we were off to Huanghe Lou, or the Yellow Crane Tower, which is one of the must-visit sites in Wuhan. Last time I came here the place was still closed, so Song promised to take me back. It had just opened again the day before.

Despite it being the May Day holiday, visitor numbers were well down, and at times it felt like it was just Song and I on top of that tower overlooking that vast city as it slowly buzzed back to life. 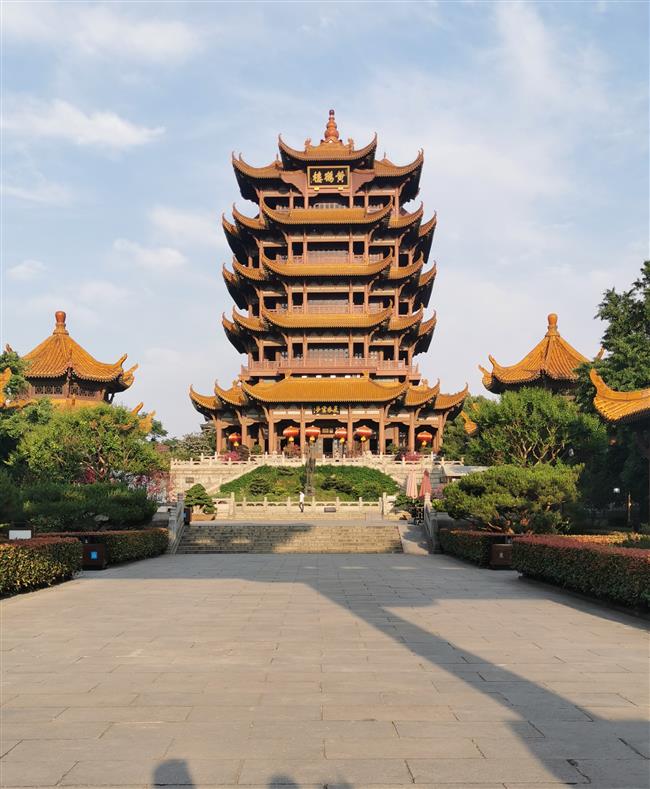 Despite being a public holiday, Wuhan's iconic Yellow Crane Tower was practically empty.

Last time I came to Wuhan, about a month ago, restaurants were still largely closed, and it wasn’t possible to dine in. Things have relaxed a bit now, so we headed off to a well-known local restaurant to have lunch with two of Song’s friends, Nicole and Toby. Normally that restaurant would have a huge wait for a table, but we were able to walk right in. What’s on the menu? A Wuhan favorite, xiaolongxia (小龙虾)!

Nicole and Toby have been married for nearly three years and were together at home during the entire lockdown. After I got to know them a little, I had to ask if they argued at all while stuck together at such close quarters. Surprisingly they didn’t have a single argument, Toby promised me, but he did mention that the divorce rate is higher than ever now.

After lunch we headed to the East Lake — one of the largest lakes within a city in China, with a water area of 33 square kilometers.

There we met up with another of Song’s friends, Chen Zhixuan, who lives nearby. She’s a high school teacher and worked as a volunteer during the entire lockdown, often having to wear full protective gear for hours on end.

Chen said she’s really happy to see that so many people are willing to come out again and visit Wuhan’s beautiful sites.

After a hearty walk beside the lake, we headed to see what the situation is like at one of Wuhan’s trendy craft breweries. We met up with Yueyue and Gaoma, as well as another of Song’s high school friends, and enjoyed locally made beers, plus pizza, quesadillas, burgers, potato wedges and chicken wings. It really felt like we could have been anywhere in the world.

Before heading back to Shanghai, we just had to grab one of the city’s famous treats to take back as gifts: duck neck. I don’t eat it myself, but it’s a must-gift if you’re visiting.

If there’s one thing I realized this time visiting Wuhan, it’s that the people here — even though they’ve been through a lot — are largely coping just fine. They can still laugh and cry with their friends and family, they still want to eat their favorite foods, and they too wish this was all over, not just for them but for everyone.

Now that the situation isn’t that great around the rest of the world, I’ve realized that we all need to struggle through this trying time, and we will make it. Just like the people of Wuhan. We may be separated by mountains and seas, but we all share the same sky.

Special Reports
ADVERTISEMENT
Return to Wuhan: Revisiting Hubei capital for the Labor Day holiday
'Live your life, but not exactly as before'
Serving different dishes helps stifle spread of diseases
Dark-sky proposal calls for reduced light pollution
The rush to 'open up' in parts of US is worrisome
Streamlining patient care through blockchain
What policymakers should ask modelers during a pandemic
May Fourth spirit inspires China to advance
Hong Kong schools urgently need to correct deviation in history education
A May Day holiday to rejoice and celebrate perseverance
EXPLORE SHINE