Villagers fight for their livelihoods as floodwaters lap at doorstep

By the time we arrived in Xinxiang and its surrounding villages, some 100 kilometers from Henan's capital, Zhengzhou, I was already exhausted. We had driven for 12 or 13 hours through the night from Shanghai after news of the devastating floods reached the world.

The crisp blue sky and sweltering summer heat betrayed the fact that more than a year's worth of rain fell here in just a few days, totally crippling major cities and small villages alike.

But we had yet to see any evidence of the massive flooding, with both sides of the country road we were driving down enveloped with hectares upon hectares of corn crops. As we rounded a corner, things became more evident.

A few dozen people were rushing about with large hoses and generators and pumps. We pulled over to get a closer look. I asked the first man I came across what was going on. "We're trying to save the corn," he said.

My eyes followed one of the hoses pumping water into a small stream backwards as it snaked its way toward the crops, and that's when I noticed the whole area was completely flooded. "If we don't hurry up, all of these crops will die."

There was still hope, he said.

At least 2.4 million acres of crops have been ruined already by the floods, meaning that the effects of this once-in-a-century downpour will be felt for many months to come.

Henan's corn and other vegetables are an important source of income for the province. Its pork, too, is a huge earner, but countless pigs died in the flooding, the final tally as yet unknown.

In other villages we came across, the residents had already decided it was too late to save crops and had put all of their attention into saving something altogether more significant to them: their very homes. 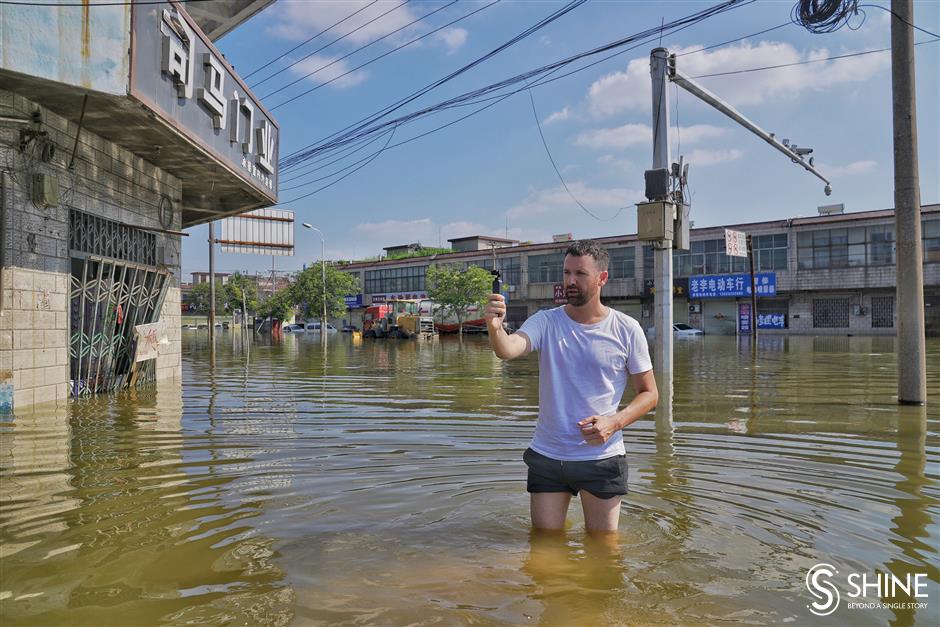 On our drive toward Hebi City, also badly hit by flooding, the road suddenly came to an end at what looked like the edge of a beautiful, small lake. Our GPS told us this was a road, but Mother Nature had made some changes.

The people of Sizhuang Village, population just 1,000 or so, told me they had been working around the clock to keep the rising floodwaters from inundating their homes. The bigger village that neighbors theirs, with a population of some 6,000, was already completely flooded, with its residents plucked away to safety.

About 100 men in the village, one tenth, were on shifts around the clock shoveling loads of dirt brought over by a digger to create an ever-changing, ever-growing makeshift dam. The floodwaters were lapping at their doorstep, and they were determined to succeed in this battle against nature.

"We are scared our makeshift dam will burst," a young villager in his late teens or early 20s told me, his body covered in sweat and his legs muddy. "So someone needs to be here during the night."

Another villager told us he expected the water to keep rising, and that it had already risen 30 to 40 centimeters in just a day. This was already nearly a week after the torrential rains began, and there was no sign of any respite.

Then a little boy came up to me and asked, in perfect English: "What's your name?"

He told me his Chinese name. "Do you have an English name?" I asked.

He shook his head.

It turned out the boy, nearly 9 years old, was from the neighboring village that had already been completely flooded and evacuated.

His answer was quick and sure: "No."

Instead of becoming emotional and giving up, the people of Henan have remained defiant, even when it might seem to outsiders to be a losing battle.

That determination in the face of destruction and loss was something I encountered continuously in our six days in Henan, and it's something that I think will stick with me for a while yet.

I'm not sure if the people of Sizhuang Village ultimately won or lost, or if they're still fighting with all they have.

I'd love to go back one day, though, and see how that little boy's English is.

﻿
Special Reports
﻿
62742
,
A very British Thanksgiving in Shanghai
New Party resolution, by learning from the past, shines the path forward
Explicating the Party's original aspiration
On the historical significance of the new resolution
Seriously, shut up about your first-world issues
Only forgiveness can lead to reconciliation
Better late than never to the Double 11 party
Extolling the rich taste of Afghan pine nuts
World trade would be threatened by unilateralism
Forum stresses global collaboration in tackling COVID-19
EXPLORE SHINE