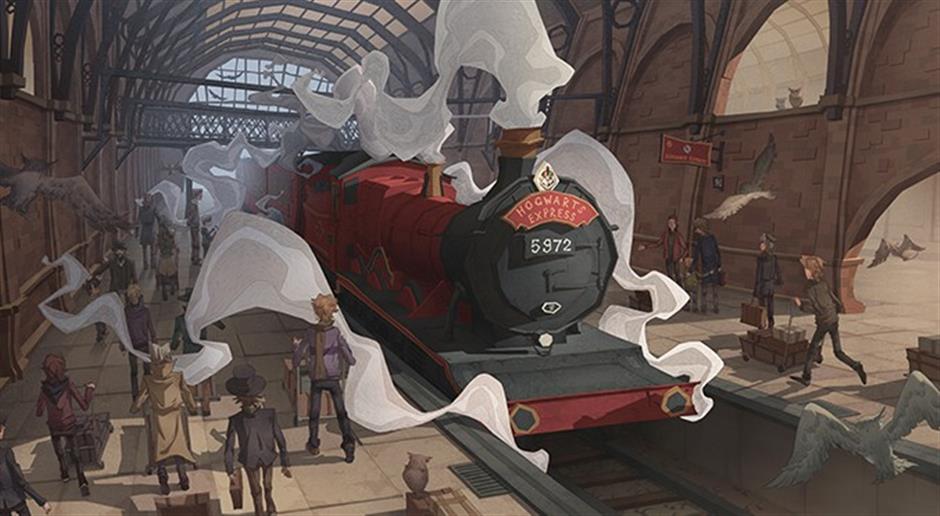 In the latest mobile game "Harry Potter: Magic Awakened," students board the Hogwarts Express train to the Hogwarts School of Witchcraft and Wizardry. The game has been a hit in the Chinese market though some players were left disappointed.

Last week I received a call from the "admissions office" of the wizarding school in Harry Potter book series by JK Rowling.

"Congratulations! You've been admitted to the Hogwarts School of Witchcraft and Wizardry. Don't be late for registration and I wish you a happy campus life," a voice said.

I had never imagined I would be "enrolled" in the school so many years after I read my first Harry Potter book. I checked with my friends and found they also got such a call.

Eventually, I learned that the calls were made to the more than 10 million players who registered for the game "Harry Potter: Magic Awakened" in advance. Many of them missed out because they thought it might be a prank call. 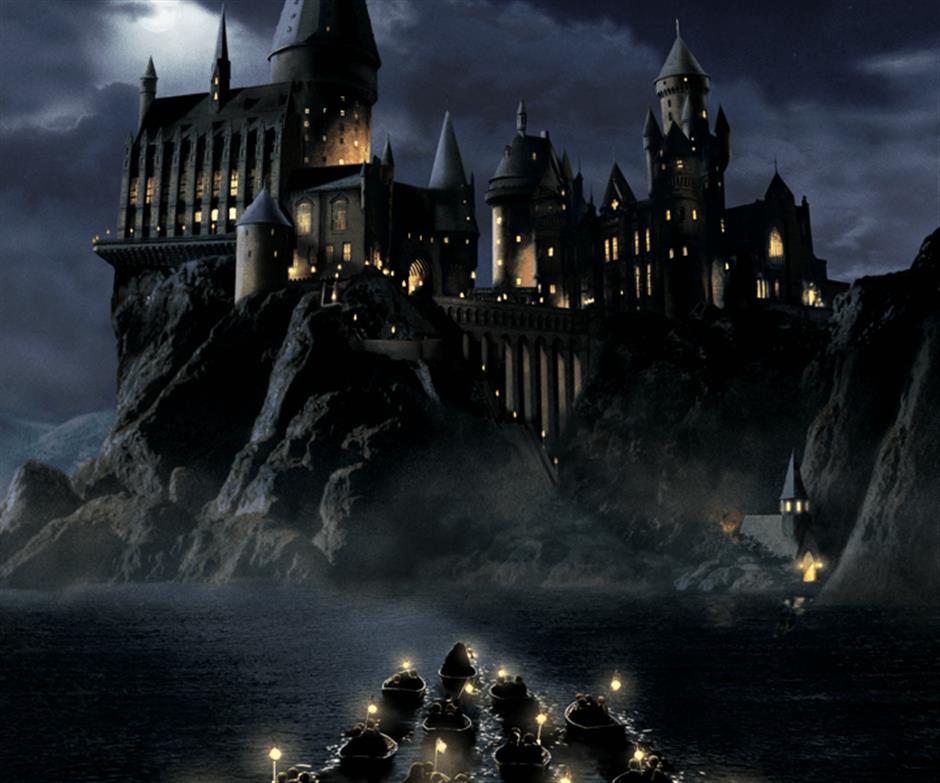 The Wizarding World of Harry Potter has been one of the long-awaited theme areas at the Universal Beijing Resort, which is having a trial run and will officially open on September 20.

Prior to the game's release, the Wizarding World of Harry Potter, one of the most attractive zones at the Universal Beijing Resort, had already sparked a fever toward the series. People joked that the wizards and witches there should recite a spell in a Beijing accent.

For those unable to make their way to Beijing, the game is a good "substitute" to review the fantastic magic world, joy and touching moments brought by the book series and its subsequent movie franchise.

The game is set in the world about a decade after the Battle of Hogwarts and the original characters are all grown up. Each player enters the school as a muggle-born wizard or witch and starts their magic life by attending the sorting hat ceremony with new characters. They talk in English but there are bilingual subtitles.

The ceremony helps with players' socialization, like those in the "house of wit" Ravenclaw team up with each other to prepare for the postgraduate entrance exams beyond the game. It also generates some new thinking toward the original works. For instance, Hufflepuff, the house with less attention in the franchise, becomes very popular among Weibo users, who said the Hufflepuff students are the closest to ordinary people and all want to be kind, loyal, honest and hard-working Hufflepuffers.

The main story provides a card-based role-play adventure while some PVP, music and parkour mini games can be played by attending lessons, engaging in clubs, dancing in the ball, exploring the Forbidden Forest and playing Quidditch, the popular sport played by teams flying around on broomsticks. 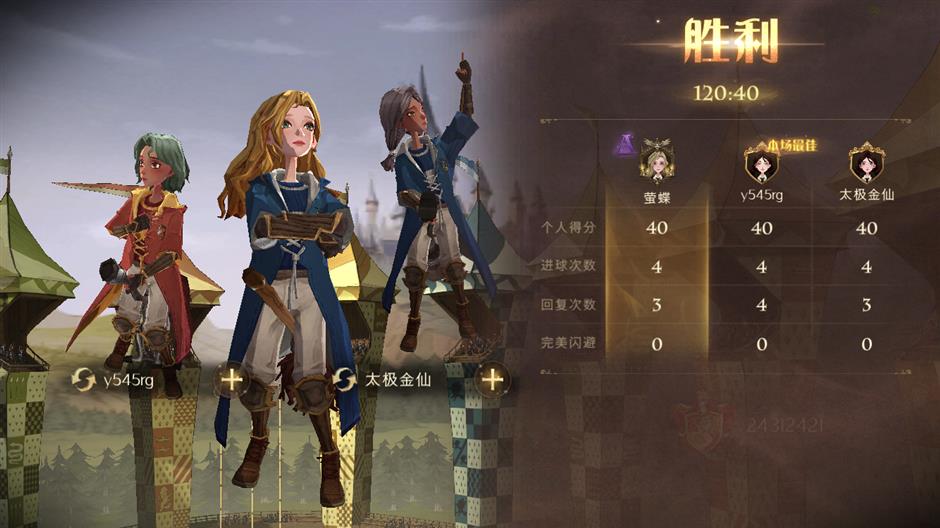 Players can try a Quidditch game, the popular sport played by teams flying around on broomsticks, by playing mini parkour game.

The style is similar to old European picture books and some iconic landmarks of the franchise, such as Platform 9 3/4 at King's Cross Railway Station, are well depicted.

Between September 9 and 13, the game was the most downloaded on the Chinese mainland. In the past few days, it also came top of the list of games with the highest income, according to mobile data and analytics platform App Annie.

However, just a week after its release, there was some dissatisfaction over its adaptation and cost.

Qian Weishun, 31, who downloaded the game on the day of its release, said: "This game is a rather outstanding one among domestic mobile games. It has rich content and I like its art style. I was a fan of Harry Potter books when I was at the high school. I feel that the game displays the Harry Potter world well and some segments reminds me of scenes in the movies."

But he thought the game was not in accord with the values of the original. For example, players as Hogwarts freshmen can get cards of illegal and dangerous spells known as dark magic which are only used by Death Eaters, the followers of dark wizard Lord Voldemort. "It's ridiculous that all of the players seem to be Death Eaters," Qian said.

The players can even get Avada Kedavra, the Killing Curse, from the card collecting system or loot box. It's marked as the highest level and one of the most powerful cards in the game. However, in the original works, it's one of the three Unforgivable Curses and it can cause instantaneous and painless death without causing any injury to the body. 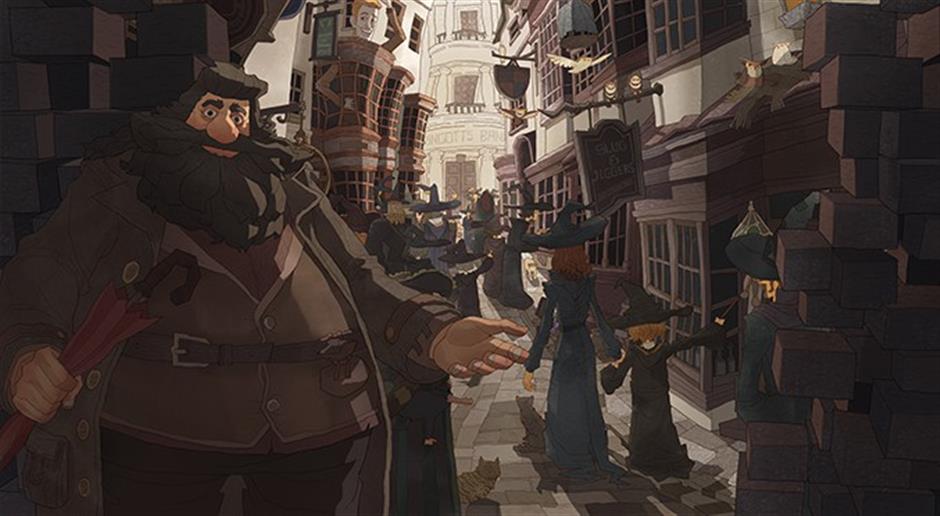 Hagrid takes the player to the Diagon Alley to buy things in preparation for the opening ceremony.

Some other gamers also argued that the story was the same for students of all the four houses. It was reasonable for the warm-hearted Gryffindor students to complete tasks like helping others. But it was hard for them to imagine an ambitious and cunning Slytherin student doing so.

Niu Shengchen welcomed the mini-games which could meet different people's tastes. But he found there were not many card sets that could be used in a fight after playing for a long time.

Many players complained they had to spend lots of money to get a good card. And a few said there was a "trick" with the 148-yuan (US$23) "Gold Silk Luxury Gift Box" which shows an "Avada Kedavra" card on its page but the text above said it's only the skin of the card. They bought the gift box at the sight of the card but found before they reached level 100 to get the card, the skin is totally useless.

A 39-year-old father, surnamed Wei, who quit the game, said he saw the game from his friends' sharing on WeChat Moments and felt it was a "money-spending" game. "The art is beautiful but my game experience is so poor."

Hogwarts students from different houses have their Christmas dinner together and receive gifts sent by owls.

But other players think it's okay to spend some money on the game. Abel Zhang, who spent more than 3,800 yuan, said he didn't have much interest in things like shopping and his spending on the game was like others' buying themselves a bag or something else.

"The new plot and new characters are interesting for me," he said. "The game 'activates' my circle of friends. My classmates from primary school to university all play this game and the different friend circles even have interaction through this game."

In the comments section of a YouTube video, in which Tom Felton who played Draco Malfoy in the Harry Potter film series promotes the game, many foreigners said they were looking forward to its global release.

Max Cioffi had asked: "Why only China and that side of the globe? When European release?" while Peter Holmes asked when the game would go out to the rest of the world.

With such great expectations from so many players, it would be good if NetEase takes existing arguments into consideration and fixes defects to make this world-famous IP shine again after the former franchise ends. 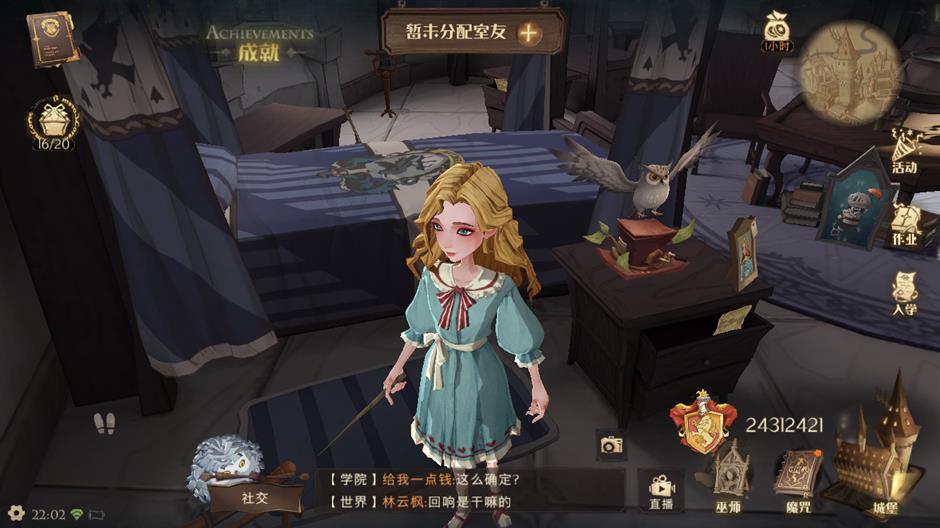 Players can invite friends to be their roommates in the dormitory.

How to take good advantage of the IP they own is always a task for gaming companies.

Currently, many domestic gaming firms tend to buy IP from popular Chinese novels or dramas and then make them into a game.

But the problem is, though wrapped in the "skin" of the famous IP, their games are not attractive to players because of the similarity and lack of innovation.

Even they get authorization from a major foreign IP, their pursuit of quick money and negligence on innovation may be not strong enough to exert its influence well.

These games are just like instant food, not delicacies.

A good game publisher should never be money-oriented. When introducing foreign IP brands and cultural elements into home-made games, the gaming companies could pay more attention to the rich Chinese culture and dig out ideas and IP from our own history and myth with their patience and innovation to make real "Chinese games."

﻿
Special Reports
﻿
Latest Harry Potter game needing a touch more magic
My reflections on September 11, 20 years on
The New York fashion designer and her two-bedroom inner-city apartment
Healthy wheelchair users at Disney show contempt for social ideals
Speed up in helping delivery drivers slow down
The importance of dedicating a day to the teachers
A slew of new regulations hit the entertainment industry: Let's take a closer look
Keep the drums beating in fight against toxic online celebrities
US anti-mask organizer Caleb Wallace dies of COVID-19
The ridiculous reasons for the US to repatriate three Chinese students
EXPLORE SHINE