'The Sound of Shanghai' proves that music cheers and cures Liu Xuanling, a 15-year-old girl, plays violin in a makeshift hospital in Shanghai, where she is under temporary central quarantine against COVID-19. The photo is a screenshot of an online concert titled "The Sound of Shanghai" held on Tuesday night.

With a polite bow, a teenage girl in a plain white shirt and a dark-color skirt greeted the online audiences on Tuesday night before playing a Chinese violin masterpiece devoted to romantic seaside scenery.

As she picked an ethereal melody on her violin, I could "see" with my mind's eye sea waves ruffled and nudged by a gentle wind. Her upright figure added a sense of loftiness to the serene musical scene. The violin piece she played is called "Haibin Yinshi," or Seaside Tone Poem, which was composed by a renowned Chinese musician in 1962 to give people hope by describing the beauty of Mother Nature. Indeed, throughout her solo performance, I felt as if I was close to a faraway sea under the sun, even though I was under lockdown in Shanghai.

Many other musicians, including violin gurus, have played the same music long before 15-year-old Liu Xuanling, but her performance on Tuesday night was unique. She was a special guest at an online concert called "The Sound of Shanghai," organized by Shanghai Daily, which featured nearly 20 performers – foreign and Chinese, professional and amateur – who are all locked down at home as the city seeks to prevent the sporadic spread of Omicron, a highly contagious variant of the novel coronavirus. She wore a medical mask, and her "stage" was a makeshift hospital in downtown Shanghai.

"May every quarantine place get such musical soothing. It does wonders on many levels," wrote an online audience member identified as GILIAM, who commented on Liu's performance. Many other "spectators" typed "bravo" one after another to show their respect for the girl.

Her "stage setup" was "made" of no other elements than segregated recovery beds, medical staff dressed in white protective suits, and others under quarantine. When she began to play, few people around her paid close attention, but gradually, a medical staff member and one quarantined lady turned their gazes toward the girl and listened silently and solemnly till she finished the whole piece.

Such is the power of music, especially in such a special space.

In a blurb to the concert anchors, the girl wrote: "More or less, people who are under quarantine here may feel anxious, but music can be soothing." She revealed that she is from Wenzhou, Zhejiang Province, and had come to Shanghai to prepare for exams at a conservatory. She was put under central quarantine after a nucleic acid test was in doubt and awaiting further clarification.

At the end of her performance, she smiled behind her mask and cheered along with the audiences, her lovely pigtail waving from side to side.

Certainly her musical skill has room for improvement, but what moved me most is her beautiful mind, which readily brings hope to others as well as herself in adversity. Music cheers, and perhaps more importantly, it cures. 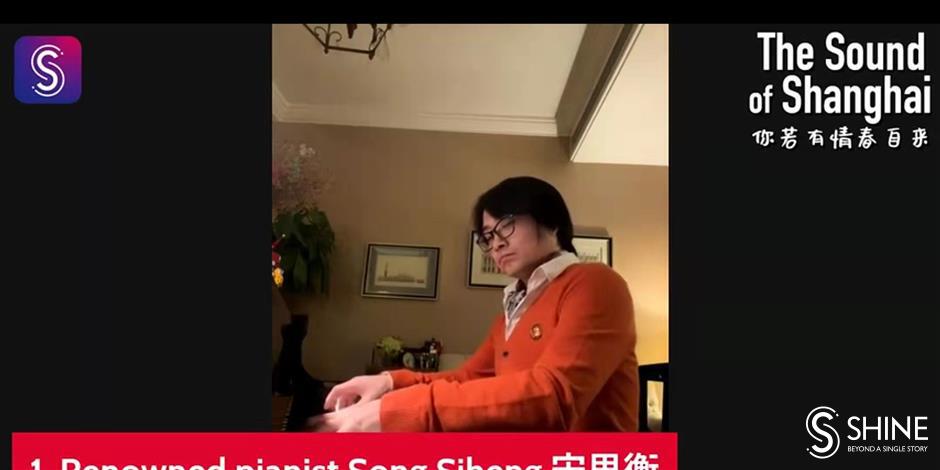 Song Siheng, a renowned Shanghai pianist, plays a piano piece titled "A Walk," at the online concert. The work was composed by the musician during the city's fight against COVID-19 in 2020.

Similar was the case with Song Siheng, a renowned pianist who has become a volunteer in his locked-down residential community, helping keep order during nucleic acid testing, distributing food to neighbors, and soothing the hearts and minds of all who come with worries.

He was the first performer at the online concert on Tuesday night. The first piano piece he played was called "A Walk," which he composed during the city's fight against COVID-19 in 2020. As he moved his fingers slowly on his piano at home, a sequence of images of quiet, shaded streets popped into my mind. I began to "walk" along with him, through imagined lanes and neighborhoods, where pedestrians flow around leisurely. All of a sudden, all worries associated with the lockdown left me.

Toward the end of the concert, my wife and I jointly performed an ancient Chinese melody titled "A Beautiful Night." We are amateurs, but we tried to convey a sense of peace to our fellow countrymen during these special times when many people from around the country are supporting Shanghai in its fight against COVID-19.

It was a pleasant surprise when I read a message from one audience member: "How peaceful the music is!" At that moment, I realized that music creates and spreads a spirit of peace and harmony, even if it's performed by amateurs.

There are difficulties in nipping the Omicron, for sure, but let's be hopeful, and give hope to others, by sharing music that cheers and cures. 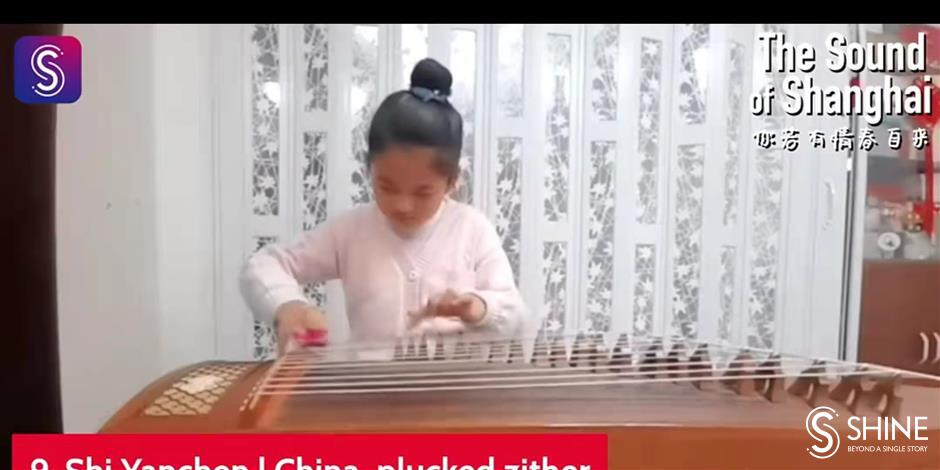 A young girl plays guzheng, an ancient Chinese zither, at the online concert "The Sound of Shanghai."

﻿
Special Reports
﻿
61922
,
61929
,
'The Sound of Shanghai' proves that music cheers and cures
Be proud of your kid for not being 'loud'
Tips for tending to our furry friends during lockdown
The angels in disguise: Ordinary souls who make life easier for us
Women smell a rat in P&G's 'anxiety sales' pitch
I recently made Twitter history, and I'm wearing it like a badge of honor
A bittersweet first day in quarantine – but we're in good hands
America needs to be honest that tariffs aren't beneficial
Passing the time: Lockdown apps for progress, entertainment, or both
My dabai cousin at the front line of the COVID-19 battle
EXPLORE SHINE