Make war on rumors before they spread like a virus

As well as the battle against the COVID-19 pandemic, there is a war on rumors.

I never fancied that rumors could be so damaging, but they are. Having taken on Shanghai Daily's job of debunking rumors disguised as news during April, I find these person-to-person hearsays are more than ridiculous.

The most impressive one I have handled lately is a story about "the green duck." A picture of a duck with green skin went viral via WeChat last week. The duck, looking emaciated, was said to be in a pandemic-relief food package provided to residents in Zhoupu Town in the Pudong New Area. 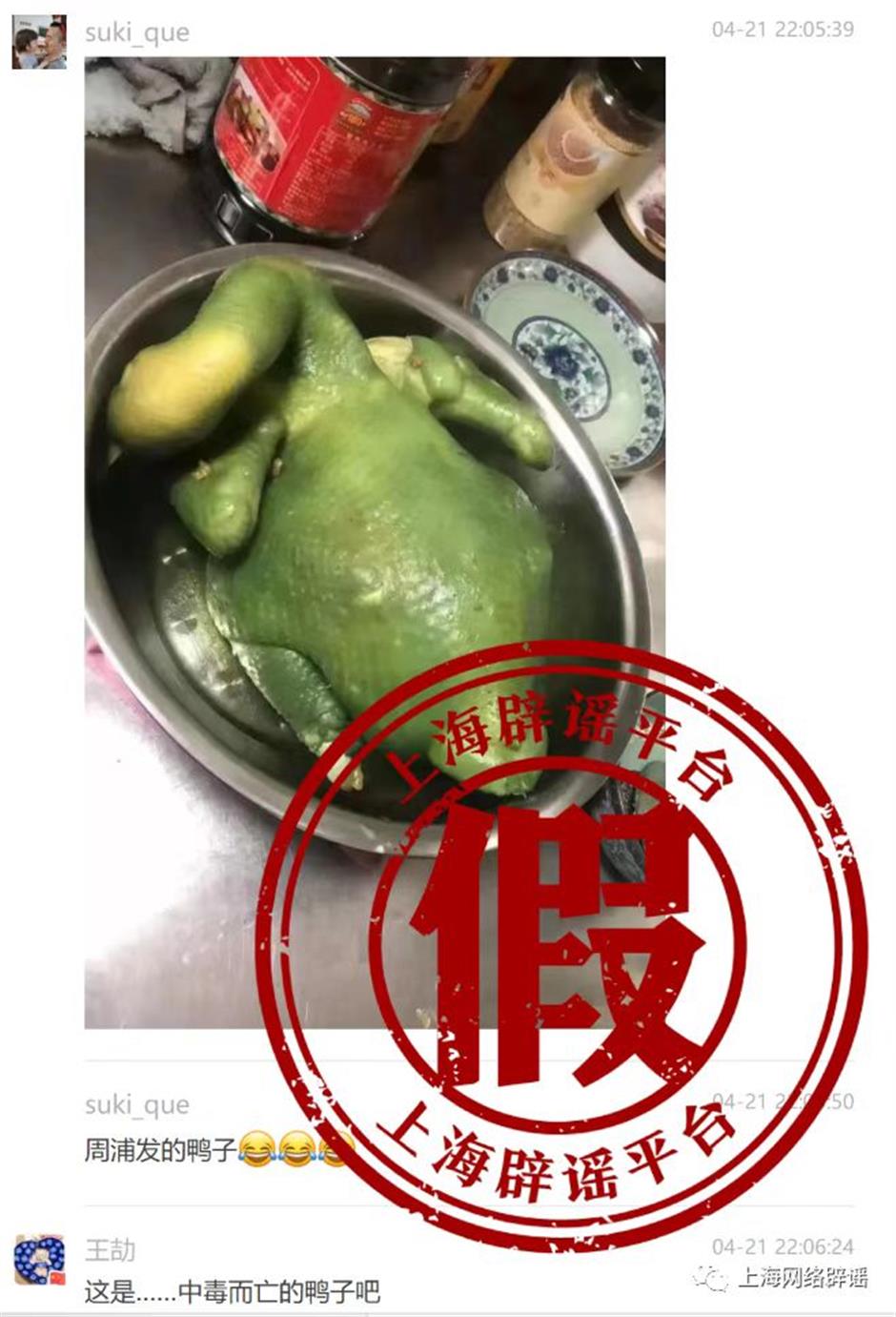 A rumored "green duck" was allegedly distributed by Zhoupu Town of the Pudong New Area.

I first saw the image on April 22 in a WeChat group made up of my primary schoolmates, and it was sent by a long-time-no-see friend living in the US. She used to be a top student and it was among the very few conversations in the group in which she participated. So I was kind of convinced that what she transmitted should be true.

But just one day later, our rumor-debunking platform revealed that the picture had been first posted by a man in southern China's Guangdong Province on the same day. The man had boiled the duck and found that its skin turned green. He then posted the image online and asked about possible reasons.

It turned out that the whole story had nothing to do with Shanghai, let alone with food relief.

From the bottom of my heart, I hoped my friend, whom I respected and even admired, could clarify what she had sent. But she did not, not even a word. I am not blaming her because maybe she just thought it funny or weird. But I find rumors can easily spoil trust, even among old acquaintances.

We may have all heard and spread rumors. There is no way to stop them unless people are prevented from communicating, which is impossible.

Meanwhile, the way modern messages travel, for example through online group chats or personal WeChat moments, has allowed rumors to multiply more easily than ever before, with heavier damage to potential victims.

In this special period when Shanghai is under great pressure to fight COVID-19 and when people are bombarded with all kinds of information every day, rumors are the least we need.

People should know that each receiver of a rumor is at the same time a potential transmitter. Also, rumors travel like the limbs of a tree: new rumors branch out to fill in the gaps left by the first rumor, which makes it sound closer to being real. In addition, when a rumor is repeated, more people may be inclined to believe it.

So before we become a transmitter of any information, we'd better stop and think for one more second – about the sources of the information. Moreover, we need to think twice about whether it has reached you with some ill intention implied from earlier senders.