Nets not planning for Durant to play this season

The Brooklyn Nets expect to wait a year before Kevin Durant plays for them.

General manager Sean Marks said on Tuesday the Nets are planning this season without the injured All-Star. He added Durant will have a say in determining when he's ready.

"With Kevin, I think what we're going to say is the expectations are that he'll be out for the year," Marks said.

Durant is recovering from surgery to repair a ruptured Achilles tendon. He was injured while playing for Golden State in the National Basketball Association Finals, then left the Warriors to sign with the Nets in July.

At the time, the Nets left open the possibility that Durant could play this season. That's still possible, but Marks isn't banking on it.

"I've been excited to see, I think we all have, how he's approached this rehab, which has been great, very refreshing and energizing for the whole group," Marks said. "But at the end of the day, this is a long-term plan here. This was never about this next season. This is about getting an elite athlete back to elite physical shape on the court, whatever that takes."

Durant returned from an injured calf muscle he suffered in the postseason for Game 5 of the NBA Finals, but lasted only 12 minutes before leaving with a more severe injury.

Marks said Durant hasn't given any indication that he plans to take things slowly. 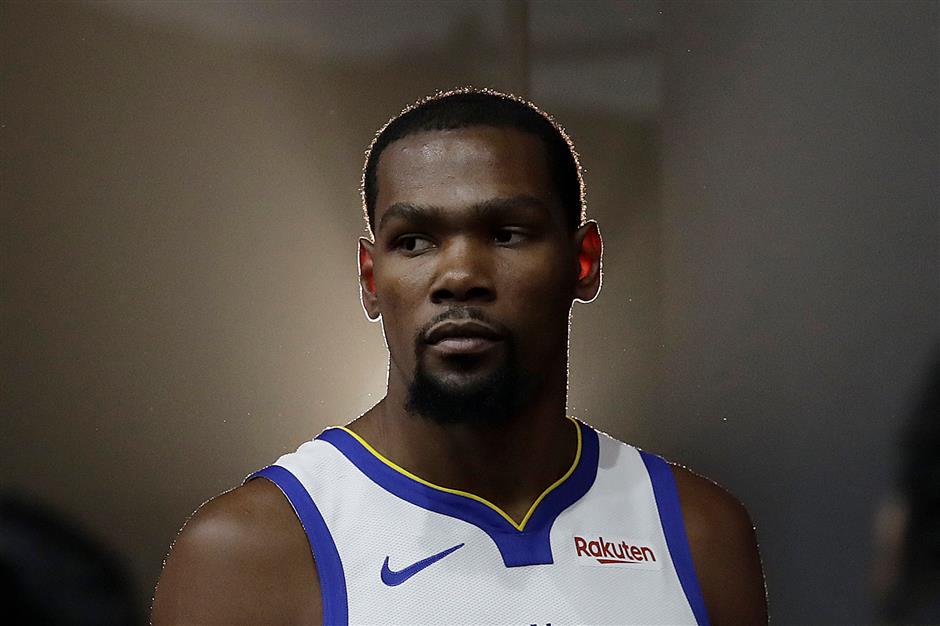 Then-Golden State Warriors' Kevin Durant posing for photos during media day at the NBA team's practice facility in Oakland, California, in this September 24, 2018, photo. Brooklyn Nets general manager Sean Marks says the expectation is that Durant won't play this season, although the All-Star forward will have a say in determining when he's ready.

"I think you're looking at one of the great competitors out there, so I think I would be remiss if I said no, he probably doesn't want to play," Marks said. "I think it's obvious he wants to play, but I think there's more at stake here.

"This is, again, a long-term approach. There are a lot of people with a lot of sweat equity in this from the rehab perspective and so forth. And so I think it'll be a group that makes the decision, and obviously Kevin included as to when and how that return is made."

In the meantime, Marks thinks Durant will try to be around his new team, though he can't predict how much. He isn't even sure yet whether Durant will accompany the Nets to China next month for their exhibition games against the Los Angeles Lakers.

Durant is expected to speak on Friday when the Nets hold their media day.

He signed with Brooklyn along with fellow All-Star Kyrie Irving, who was hurt on Tuesday when he was elbowed during a pickup game. Marks doesn't believe the injury is serious, although Irving went for an evaluation accompanied by coach Kenny Atkinson.

When Durant and Irving join a team that won 42 games and made the playoffs last season, the Nets could turn into one of the top contenders in the Eastern Conference. They know it could take a season.

"I don't know that all the guys we signed in the offseason are coming here for mediocrity," Marks said. "That's not part of it. This is why we went in."