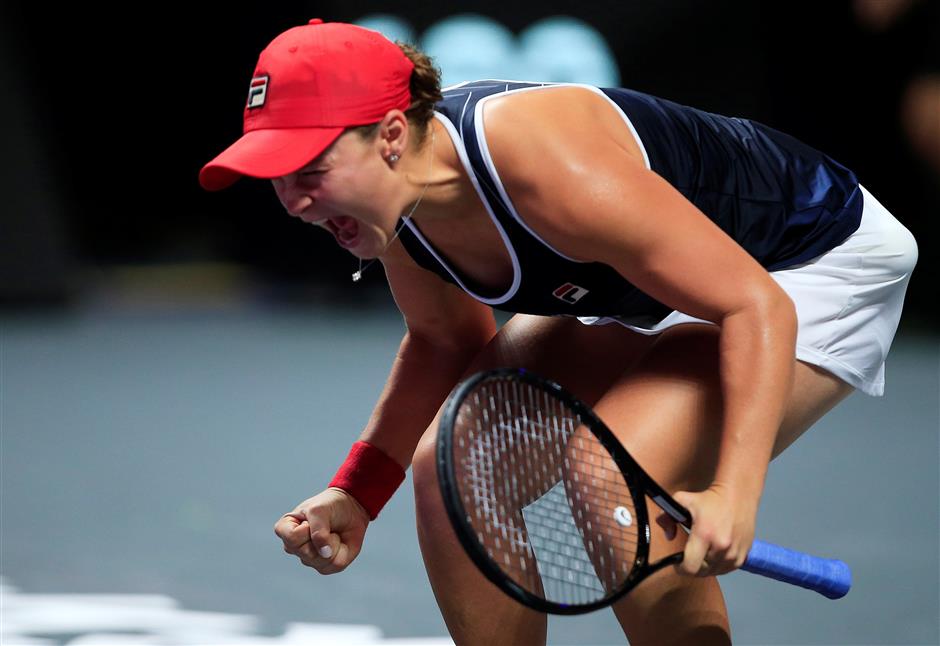 Australia's Ashleigh Barty reacts after beating Ukraine's Elina Svitolina in the final of the WTA Finals in Shenzhen, south China's Guangdong Province, on Sunday. The world No. 1 won 6-4, 6-3.

Ashleigh Barty finished the season in style by beating defending champion Elina Svitolina 6-4, 6-3 to add the WTA Finals title to her end-of-year world No. 1 ranking on Sunday.

Barty, who became the first Australian to top the WTA rankings at the end of the year since they were introduced in 1975, capped a stellar season in Shenzhen having also won the French Open at Roland Garros in June.

Barty became the first Australian to win the WTA Finals since Evonne Goolagong Cawley claimed her second title in 1976.

"It's been the most incredible year for me," said Barty, who pocketed a record US$4.42-million for her victory in Shenzhen, where the tournament was being held for the first time as part of a 10-year residency.

"It's been an incredible new era in women's tennis and to play in front of this spectacular crowd has been amazing."

Barty's only loss at the tournament was to late replacement Kiki Bertens of the Netherlands and she became the fifth debutante to win the lucrative round-robin tournament.

Svitolina has not won a trophy since claiming the WTA Finals in Singapore last year, which remains the biggest title of her career. She had lost just one set before the final to be on track to claim a maximum prize of US$4.725 million before falling short in the decider.

The Ukrainian had taken a liking to the slow indoor hardcourt, which has been criticized by other players, with her methodical counterpunching overwhelming opponents — but she was thwarted by an irresistible Barty.

"It definitely was a great week for me," Svitolina said. "(Barty) had a great tournament and an amazing year."

There was little between the pair until the penultimate game of the first set when Barty, who had never beaten Svitolina in five previous attempts, fended off a break point before putting the Ukrainian's serve under pressure in the following game.

The Australian took the opener when she converted a break point at the third time of asking, punishing Svitolina's second serve with a firm forehand.

The tension increased in the second set as neither player was able to hold serve consistently.

Svitolina broke early to give herself a lifeline, only for Barty to win the next three games — including two breaks of serve. Yet another slip-up on her own serve allowed Svitolina back into the set.

Barty broke yet again, however, claiming the eighth game of the set when she converted her third break point as Svitolina pulled a shot wide and secured her fourth title of the season with a hold to love in the next game.

Barty's season is set to continue when she spearheads Australia's Fed Cup title hopes against France in the final on November 9-10. 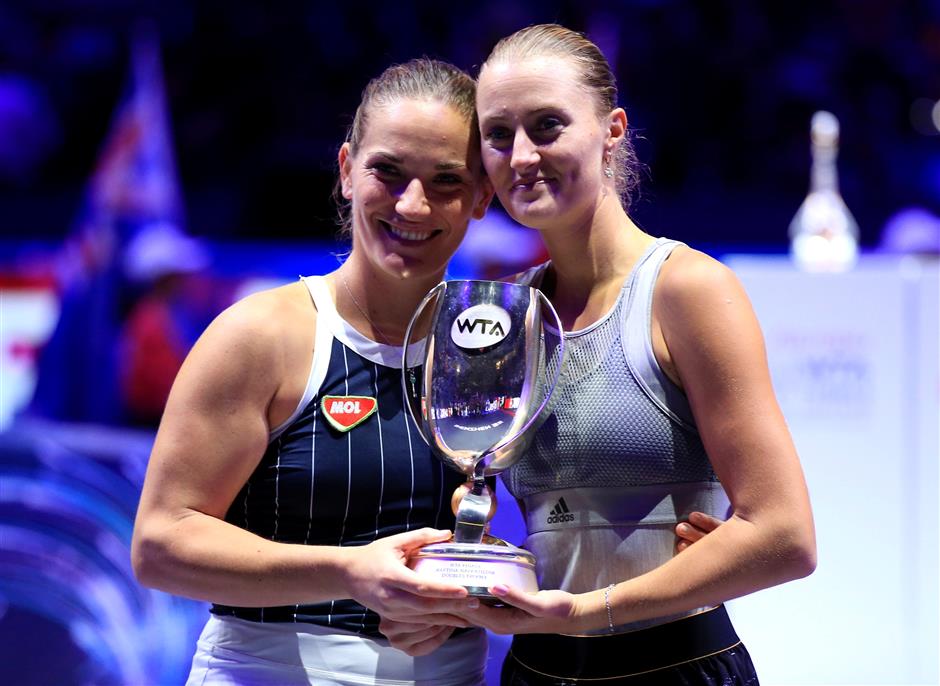 Hungary's Timea Babos (left) and France's Kristina Mladenovic celebrate with the trophy after winning the doubles final of the WTA Finals against Hsieh Su-wei of Chinese Taipe and Czech Barbora Strycova. The duo won 6-1, 6-3.

Hungary's Timea Babos won the doubles title for the third year in a row, partnering with Kristina Mladenovic of France to see off Czech Barbora Strycova and Hsieh Su-wei of Chinese Taipei 6-1, 6-3 in the final.

"We played some great tennis," said Babos. "There was no-one out there on this tournament who could beat us. That's really amazing.

"Of course, to share it with Kiki, to play on the biggest stage with her, to get the title together, it's an incredible story.

In a lopsided final, the world No. 3 completed an unbeaten campaign in Shenzhen with a 64-minute rout.

The French Open champions were the first team since 2008 to defend their crown. Babos won in 2017 when paired with Czech Andrea Sestini-Hlavackova.

"We really stood up and believed in our mental strength," Mladenovic said.

They gained a decisive break in the sixth game of the second set before completing a convincing victory over the Wimbledon champions.

Strycova had already secured the year-end No. 1 doubles ranking for the first time in her career.