Eighteeen nations will gather in Madrid's La Caja Magica on Monday as the men's tennis season culminates with a revamped Davis Cup format dreamt up by a man who earns his living playing soccer for Barcelona.

The week-long soccer World Cup-style Davis Cup Finals will be the biggest shake-up the 119-year-old team event has ever had and is being bankrolled by Barca defender Gerard Pique's investment firm Kosmos to the tune of US$3 billion over 25 years.

It has not been smooth sailing for the International Tennis Federation since it announced the radical revamp with some accusing the organization of selling the soul of a competition loved by tennis diehards, but which had slowly lost its lustre.

There is also the small matter of the ATP Cup — seen as a rival competition — launching in January.

As for any large sporting event the key ingredient will be the quality of the entertainment and the atmosphere.

Nineteen-time Grand Slam champion Rafael Nadal will lead the Spanish team, while Novak Djokovic will play for Serbia, Andy Murray for Britain and Nick Kyrgios will surely spice things up as he turns out for Davis Cup heavyweights Australia.

But there will be notable absentees. Roger Federer's Switzerland failed to qualify, world No. 5 Dominic Thiem's Austria also missed out while Germany will be without Alexander Zverev who has shunned the event.

Fast-rising Russian Daniil Medvedev withdrew last week to recover after a long season while other big names such as Canada's Milos Raonic are injured.

The format will involve the 18 nations, which include two wildcards, split into six groups of three with the winners and best two runners-up moving on to the knockout phase.

Group ties will involve two singles and a doubles with rubbers played over best of three sets.

The final will be contested next Sunday. 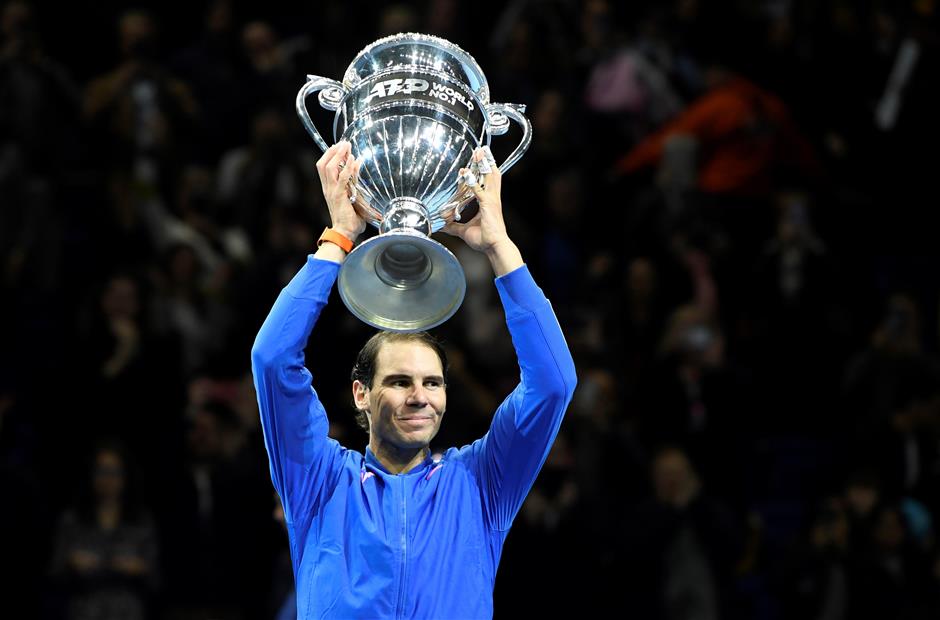 Rafael Nadal celebrates with the ATP World No.1 trophy after winning his group-stage match against Greece's Stefanos Tsitsipas at the ATP Finals in London on Friday. Nadal will lead Spain at the revamped Davis Cup, which kicks off in Madrid on Monday.

As well as the main arena at La Caja Majica (The Magic Box), matches will also be played on two smaller courts to enable the jam-packed schedule to be completed in a week.

Critics of the new venture cited the loss of the uniquely partisan Davis Cup atmospheres.

While Spain will be vocally backed and Britain has sold 1,000 tickets, the prospect of matches taking place in front of banks of empty seats will worry organizers.

Murray, who famously won the Davis Cup for Britain in Ghent in 2015, roared on by deafening crowds, said while he is intrigued by the new format, he is concerned that the Magic Box might be lacking the magic created by the fans.

"I'm going to miss that but I love being around the team and I'm excited to see what the new format looks like and I hope the atmosphere is brilliant," he said. "That's my one concern."

Croatia will arrive as defending champion having won the last traditional final last year against France in Lille and will face a tough task in Group B where it takes on Spain and Russia without top player Marin Cilic.

Nadal, despite some abdominal issues, is expected to line up for Spain, although whether or not he would last a potential five singles matches in six days is doubtful.

The 33-year-old said fans should expect the unexpected.