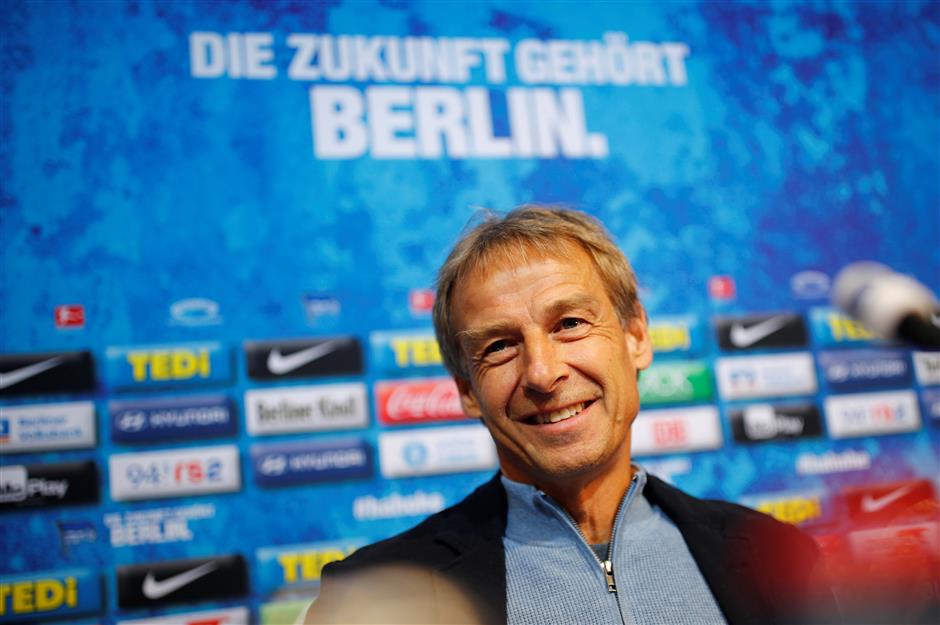 Hertha Berlin's new coach Juergen Klinsmann during a press conference at the Olympic Stadium in the German capital Berlin on Wednesday.

Bold dreams rarely grow faster than in Germany's capital Berlin, and the city's first football club is no exception. For decades, Hertha BSC has tried to develop and gain ground at the top of German football, though the results of such intense efforts have been rather small so far.

But now the 1930 and 1931 national champion is preparing for a more prominent chapter. Shortly after investor Lars Windhorst announced a 250-million euro (US$275.33 million) cash injection, a coach of outstanding international reputation is taking over.

Capped 108 times by Germany as a player, Juergen Klinsmann has been announced as Hertha Berlin's new head coach until the end of the 2019-20 season, succeeding former Hertha amateur coach Ante Covic.

A few weeks ago, Klinsmann had joined the club's board.

There could scarcely be a more cosmopolitan appointment than the 1990 World Cup winner. The 55-year-old former United States national coach was German national coach from 2004 to 2006 and revolutionized the country's football, opening doors for new training methods and procedures.

He set up a new coaching section, with current Germany coach Joachim Loew as his assistant and Koepke as goalkeeper coach, and introduced international experts for various coaching subfields.

However, the former VfB Stuttgart, Inter Milan, Tottenham Hotspur, Bayern Munich and Sampdoria striker didn't win friends everywhere he turned up. Unforgotten is Klinsmann's tragic chapter as Bayern coach, when he was sacked after only 10 months in charge.

Klinsmann tried to create a feel-good oasis for players. On the club headquarters roof, he placed Buddha statues and modernized nearly the entire campus.

As national coach, he tried to stimulate his players' interest in new training methods by inviting Olympic athletes of various disciplines to discuss their daily training routines.

To appoint Klinsmann can be seen as an incalculable risk, as it looks like the former striker's last attempt to return to club coaching. Klinsmann's methods have been subject to wildly differing opinions. Some see him as a visionary; others regard him as a troublemaker.

Klinsmann's leadership characteristics are described as strict and uncompromising.

At the same time, it is a risk for Hertha's managing director Michael Preetz. The former striker's future at the Berlin club is now highly dependent on Klinsmann's success.

Depending on the outcome of the surprising move, Klinsmann may end up being an excellent choice for Hertha. Insiders say the new Berlin coach has learned from mistakes of the past. In Munich, media reports spoke of him having turned things upside down more than the Bavarian club could deal with.

His relationship with the press hasn't always been uncomplicated. But besides all comments and opinions, Klinsmann's return is seen as a sensation. One of German football's most divisive figures is back in the line of fire.