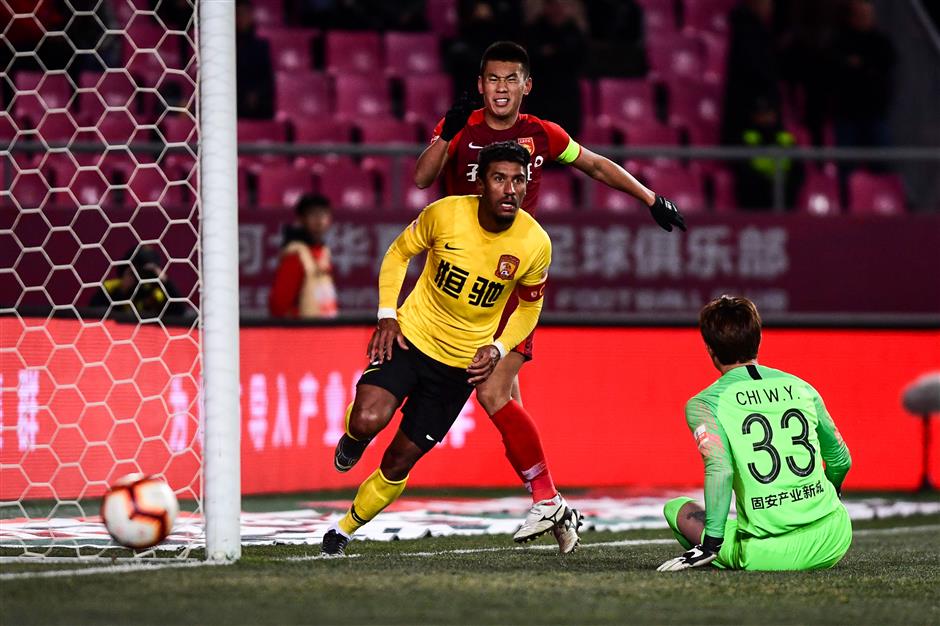 Paulinho scored twice for top-of-the-table Guangzhou Evergrande in a 3-1 victory on Wednesday but the Chinese Super League title race will go to the final day of the season.

Fellow Brazilian Anderson Talisca also netted in a comfortable win at Javier Mascherano's Hebei China Fortune but Beijing Guoan thrashed Guangzhou R&F 4-1 to set up a nerve-wracking finale to the campaign on Sunday.

Fabio Cannavaro's Evergrande is two points clear of Beijing and hosts struggling Shanghai Greenland Shenhua with one hand on its eighth league crown.

Bruno Genesio's Beijing, the only side that can catch it, must beat fourth-placed Shandong Luneng at home and hope Evergrande loses.

Talisca, who scored a brace for Cannavaro's side against reigning champion Shanghai SIPG in last weekend's pivotal 2-0 victory, was at it again on 12 minutes at Hebei.

The 25-year-old attacking midfielder took the ball on his chest close to the penalty spot and swivelled, firing low and left-footed into the bottom corner.

Paulinho, formerly of Barcelona, made it 2-0 four minutes before half-time when he lashed into the net. Talisca got the assist.

Skipper Paulinho scored his second, from close range, just before the hour.

Cedric Bakambu, the French-born Congolese striker, grabbed a brace for Beijing to keep the capital club in the title tussle.

Rafael Benitez suffered one of the heaviest defeats of his distinguished managerial career as his Dalian Yifang side lost 1-5 against relegation-threatened Tianjin Tianhai.

The former AC Milan and Italy international was appointed coach in July to save Shenzhen from relegation, but a 3-3 draw home to Henan Jianye condemned the team to China's second tier, along with Beijing Renhe, which drew with SIPG 1-1 on Wednesday.

Donadoni has won only one of his nine matches in charge.