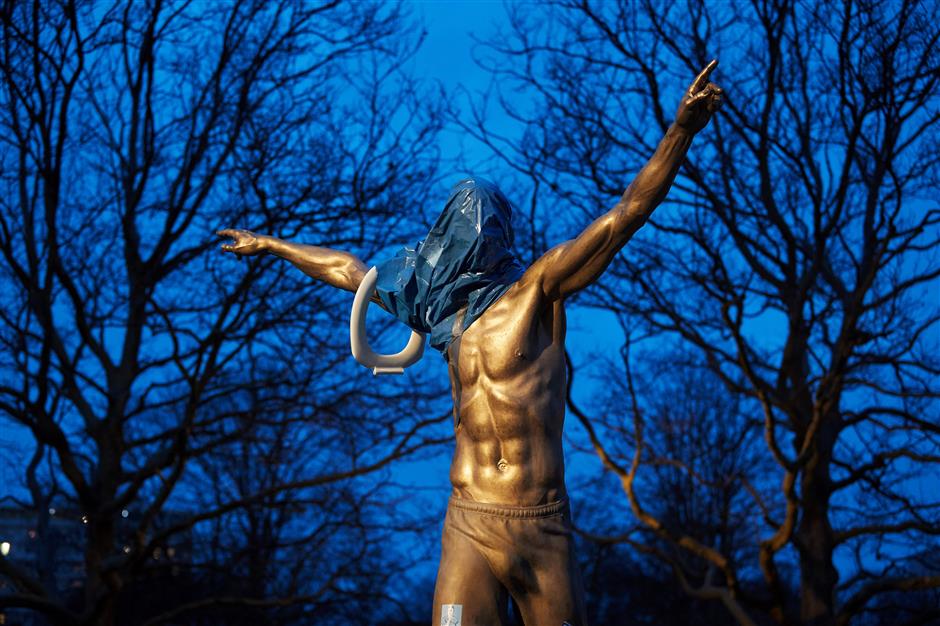 A statue of the Swedish football player Zlatan Ibrahimovic is seen covered with a blue plastic bag and a toilet seat hanging on one arm in Malmo, Sweden, on Wednesday.

Swedish footballer Zlatan Ibrahimovic on Thursday filed a "hate crime"  complaint after being the target of vandalism and racists threats, police said, a day after the star announced his part ownership in club Hammarby.

A statue of the player, Sweden's leading international goalscorer, in Malmo was attacked with fire and paint while the word "Judas" was daubed across the front door of his residence in Stockholm.

The perpetrators of the threatening acts have not been identified but "Ibra" angered fans of Malmo FF — the club where he started his professional career in 1999 — on Wednesday when he announced he had bought a share in rival club Hammarby.

In Malmo, several people, most of them wearing hoods, vandalized a statue of Ibrahimovic that was unveiled just two months ago outside Malmo Stadium. Near the monument they wrote the words "Cigani do" ("Gypsy" in Bosnian, and "die" in Swedish) in spray paint.

Born in Malmo, Ibrahimovic is the son of a Bosnian father and Croatian mother.

Videos posted on social media showed masked people lighting fires and aiming them at the statue. There was no significant damage and a protective barrier has since been put up around it.

"An investigation has been opened into vandalism and threats with suspected hate crime motive. Zlatan Ibrahimovic is the plaintiff," a police spokesman said.

Earlier on Wednesday, angry supporters had slipped a toilet seat on to one of the statue's arms.

Hammarby, a Stockholm-based team playing alongside MFF in Sweden's top league, announced on Wednesday morning that Ibrahimovic had bought around 25 percent of the shares in the club.

"He's turned his back on the city and what made him who he is," Kaveh Hosseinpour, vice president of the MFF supporters' club, told broadcaster TV4.

At noon yesterday, nearly 7,000 people had signed an online petition calling for the immediate removal of his statue in Malmo.

"How could you do this to us?" one outraged signatory wrote while another proclaimed that "everything can't just be about money".

In Stockholm, the door of the former Juventus, Barcelona, Paris Saint-Germain and Manchester United forward's home was covered with the word "Judas," and a tin of "surstromming," a notoriously smelly fermented herring, had been opened and poured outside the building.

Ibrahimovic, whose contract with Los Angeles Galaxy in the United States' Major League Soccer expires at the end of the year, has not announced whether he will continue his career at another club.