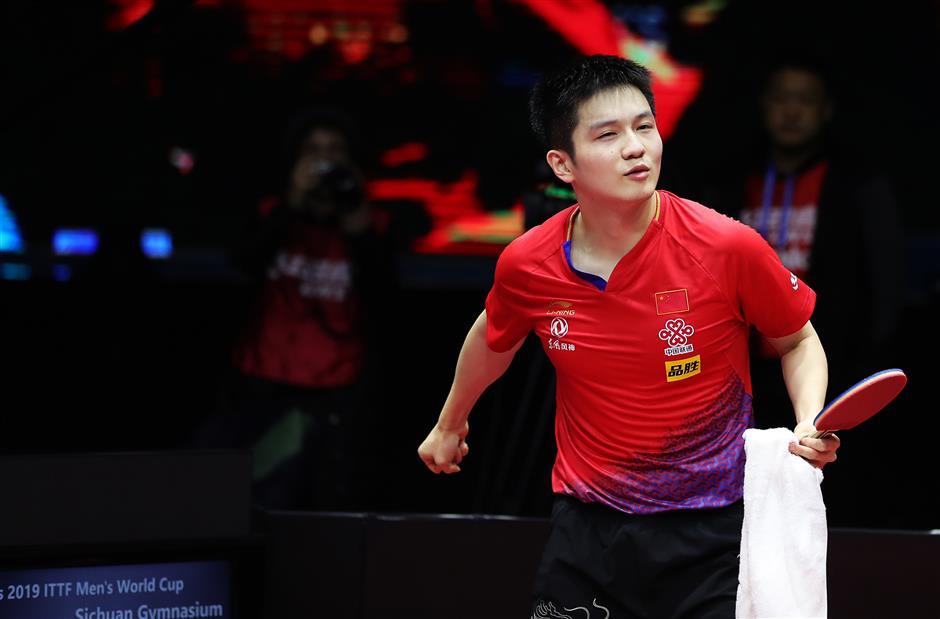 Table tennis world No. 1 Fan Zhendong ensured there was no dramatic ending to the ITTF men's World Cup in Chengdu, southwest China's Sichuan Province, on Sunday, beating Japanese teenage sensation Harimoto Tomokazu 4-2 in the final to lift the trophy.

It is the third title for Fan at the annual major tournament, which is considered as one of the top three events among paddlers alongside the Olympic Games and the world championships.

Facing an opponent who had stunned Olympic champion Ma Long in the semifinals earlier in the day, Fan was forced to play all out as the defending champion found himself throwing away a 7-4 lead to lose the first set 11-9.

Fan, 22, then made short work of his 16-year-old opponent, taking the second set 11-4, but found it far from easy to put him away as Harimoto pulled a set back by winning the third 11-6.

"It has been quite different from my first World Cup victory," Fan, who won the 2016 and 2018 World Cup before Sunday's triumph, told a post-match press conference.

"I realized that the situation has changed in the past three years. I'm no longer the surprise figure to the world's veteran players but the No. 1 target for the younger generation.

"With more eyes on me, I have to be humble, stay focused and play more impressive table tennis," he added.

At the awards ceremony, the Chinese table tennis association president Liu Guoliang handed Fan the gold medal and told him "to do the same next year", referring to the prospects of Fan winning the gold at the 2020 Tokyo Olympic Games.

"I'm very thankful to President Liu, my former head coach, for life guidance, as always," Fan said. "I thank him for having faith in me and that's my expectation, too, for next year."

"I know better, however, that I have to be more focused on what happens at the right moment and be more specific on the details of every match and training session ahead of the Olympic Games," he added.