Cannavaro expects to stay at Guangzhou after 'miracle' title 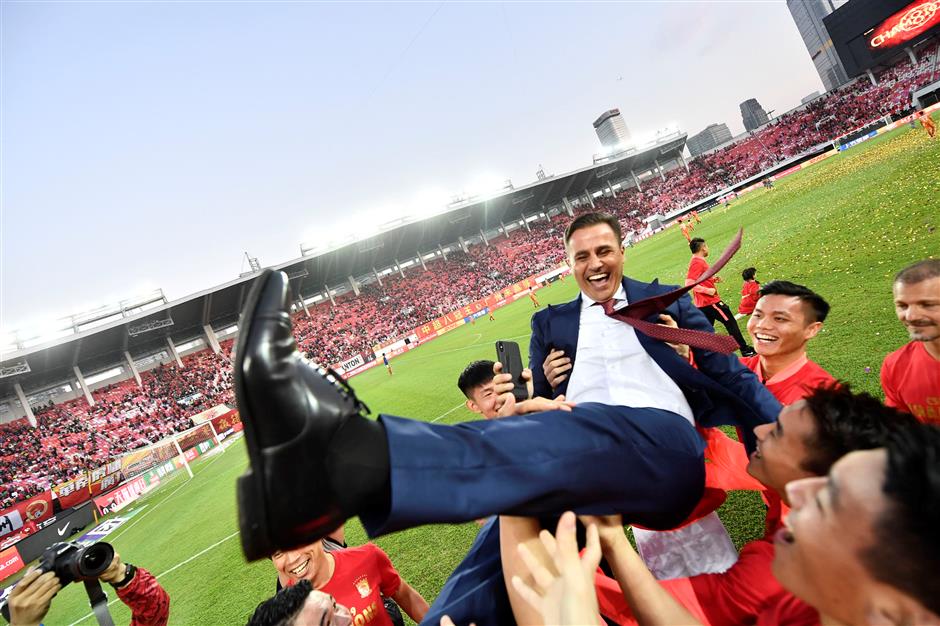 Guangzhou Evergrande head coach Fabio Cannavaro is feted by his players following the 3-0 victory over Shanghai Greenland Shenhua at Tianhe Stadium in Guangzhou on Sunday that clinched an eighth Chinese Super League title in nine years for the club.

Fabio Cannavaro said taking Guangzhou Evergrande to the Chinese Super League title was "a miracle" and gave the strongest indication yet that he expects to keep his job.

The 46-year-old Italian World Cup winner was temporarily moved aside as coach in October but returned to lead China's most successful club to the championship on Sunday.

It was the former Juventus and Real Madrid defender's first major honor as a head coach and a personal triumph after a turbulent few weeks during which he appeared to be on the brink of the sack.

"I know that many names have been mentioned as a replacement for me, including (Jose) Mourinho, (Zinedine) Zidane and (former Guangzhou coach Luis Felipe) Scolari," Cannavaro told the Guangzhou Daily in a report published on Tuesday, referring to recent rumors.

"For a team of Evergrande's level, fans hope to have the top coaches and the coach will definitely face various pressures.

"I'm definitely not a perfect coach and it's impossible to make everyone satisfied."

Guangzhou was still top of the CSL in late October but a poor run led it to briefly push Italy's 2006 World Cup-winning skipper aside and put veteran captain Zheng Zhi in charge.

Cannavaro made a surprise return at the start of November but only after a reprimand from the club, which scolded him for his "weak ability to rectify mistakes".

Guangzhou went on to win the next three matches and seal its eighth title in nine years with a 3-0 home win over Shanghai Greenland Shenhua at the weekend, after which Cannavaro was tossed in the air by his jubilant players.

"I know very well that the outside world had various opinions about it," Cannavaro said of the brief period when he was relieved of his duties.

He did not say how close he came to leaving, but said winning the CSL had fulfilled Guangzhou's demands for the season.

Bearing in mind injuries and the need to revamp an aging squad, winning the title was almost "a miracle", Cannavaro said, hailing Brazil midfielder Paulinho as a "superhero".

"An average team can't do it," he added.

Cannavaro said he has several priorities for next season, suggesting that he expects to still be in charge at Guangzhou.

"I hope to further reduce the average age of the team, get in better replacements and continue to provide talent for the national team," he said.